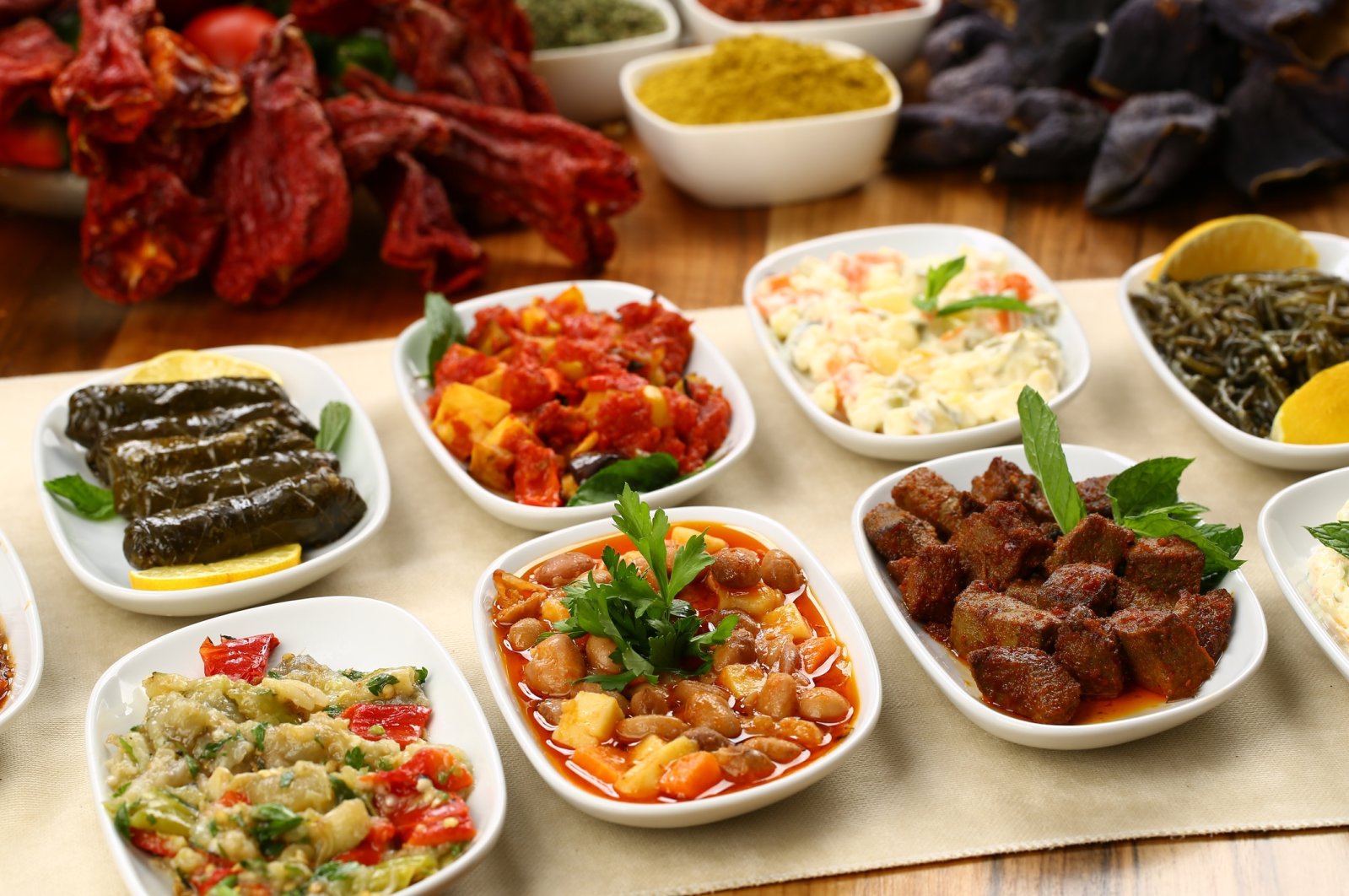 If you want to understand the food culture in Turkey, you'd better start with mastering the art of mezes. Call them hors d'oeuvres, snacks, nibbles or appetizers, mezes are an essential part of tables across the country and Turks' pride and joy

Mezes are one of, if not the most important, series of dishes in Turkish cuisine. Considered to be an appetizer and cold starter, mezes are appetizer-sized dishes that are shared among the table and consist of vastly wide variations of vegetables, greens, pulses, pastes, yogurt and cheese. Pretty much every table in Turkey is adorned with some sort of meze at an evening meal at which the Turks like to take their leisurely time, enjoying small morsels of the dishes for what could be hours. Each meze has its own distinct flavor, which can be strong, spicy and savory, and come accompanied by a basket of fresh bread.

Mezes are certainly not for the starving but more geared toward those who want to satisfy their eyes and their taste buds and enjoy this shared tradition. The food you fill up on follows the starter course and tends to be either meat dishes such as kebabs or fish. That being said, it is perfectly acceptable to solely dine on meze or to request a personalized plate of smaller servings, which is referred to as a “meze tabağı.” Restaurants tend to have refrigerated display cases containing their selection of mezes for days, while some will present trays with sample dishes to the table from which customers can choose from. You don’t actually get to try them though, this is only for the customer to select from what is on offer. The hardest task when it comes to meze is deciding on which ones to try. Therefore, the following is a list describing some of the most traditional mezes you will come across when dining out in Turkey. Meanwhile the Turkey's Culture and Tourism Ministry has published a top 10 list which it deemed to be the best of them all.

Let’s start with the classics:

Similar to the salsa served in Mexico, “acılı ezme” consists primarily of tomatoes, green peppers, onions, garlic and lemon juice that is mashed together. Where it differs and takes on a Turkish twist, is with the addition of olive oil, red pepper paste, paprika flakes, pomegranate molasses and a pinch of mint. Some are spicier than others, but it is best to take this opportunity to note the word “acılı,” which means spicy.

This refreshing meze perfectly complements the spicy mezes that adorn the table as it is centered on yogurt, garlic and spices such as dill and mint.

Luckily, there are a number of mezes in Turkey that are centered around the delicious eggplant. Unluckily for the layman, however, is that the names and preparation of the dishes can get a little intermingled and thus slightly confusing.

The most widespread eggplant meze in Turkey and in the cuisine of the greater Middle East would have to be “şakşuka,” or as it is also sometimes referred to “baba ghanoush.” In this preparation, the eggplant is roasted with green peppers and tomatoes and doused in parsley and an olive oil and tomato sauce.

When the same medley of vegetables as above, ie. eggplant, green peppers and tomatoes, are combined with a garlicky yogurt sauce, the dish is referred to as "köpoğlu."

The word for eggplant in Turkish is “patlıcan” and thus, the meze “patlıcan salatası” means eggplant salad in Turkish. However, do not expect a mixture of lettuces and vegetables, as in this case, this salad consists of a very simple medley of smoked eggplant and roasted red peppers that are mixed together in a dressing of olive oil and lemon juice. Just to mix with your mind a little more, some venues serve eggplant salad as simply smoked eggplant and garlic mixed with yogurt. In this case, the meze is referred to as “yoğurtlu patlıcan salatası.”

While hummus is now a household term all over the world, I can pretty much guarantee once you try it in the Turkish preparation, you will never be satisfied with it in its regular form again. This is because in Turkey this dip, which is made from ground chickpeas, tahini, garlic, lemon and olive oil and with or without cumin, is served in clay dishes and topped with sizzling strips of pastırma or pine nuts after being heated up in the oven.

The most prevalent meze centered on beans is “barbunya pilaki.” Barbunya refers to the borlotti bean, aka as the cranberry bean, and “pilaki” is a term for the cooking style in which beans or fish are prepared with onions, garlic, tomatoes, carrots and parsley and cooked in olive oil.

A similar variation of pilaki is “taze fasulye,” which is long green beans that are cooked with onions and tomatoes in olive oil. “Börülce” is yet another variation, in this case, centered on whole or shelled black-eyed peas.

The beloved broad bean takes a different turn in Turkey in which the beans are either shelled or left in their green casing and prepared with the distinct flavor combination of sautéed onions, ample dill weed, olive oil and lemon juice, to become the meze referred to as “zeytinyağlı bakla” or the whole mixture can be blended together into a thick paste, which can be served in slices when cold or as a hot puree and is referred to as “fava.”

While samphire, or “deniz börülcesi” in Turkish, is actually a succulent, its application in the meze format in which it is blanched and dressed in olive oil, crushed garlic and lemon juice is the same process used to prepare most seasonal greens.

This popular meze, which incorporates purslane, garlic and yogurt, is actually one of the milder mezes out there.

Sauteed grated carrots are combined with garlic and yogurt in the mouth-watering meze referred to as “havuç tarator” or “havuç borani.” In another variation, carrots are substituted with zucchini, in which case the meze is called “kabak borani,” but not to be confused with a stew-like dish of the same name that is made in Hatay.

Let’s finish with a bang: “Atom” is a meze of grilled peppers, the hotter the better, which are mixed into garlicky yogurt, so proceed with caution!

Originating in Syria but also popular in Levantine and Turkish cuisine, where it is sometimes referred to as “acuka,” “muhammara” is a rich paste made from freshly roasted red peppers and its paste, tomato paste, bread crumbs, crushed walnuts, cumin, paprika and lots of garlic, which is blended up with olive oil and served both as a meze or as a breakfast spread.

Girit Ezmesi: The name “Girit Ezmesi” in other words, Cretan mash, denotes where this delicious dip hails from. While preparations can vary, the constant in this meze is crushed feta cheese, walnuts and garlic that is mixed in with fresh herbs, which can vary from dill weed to basil or even roasted peppers.

This Lebanese meze can be found occasionally in Turkey and when so, it is like winning the lottery as the delicious “mütebbel” consists of a combination of smoked eggplant, garlicky yogurt and the special addition of tahini.

Another rare find, but well worth trying if you come across it, is the Armenian meze called “topik,” which is a paste-like mixture of chickpeas and possibly potatoes, which is either stuffed or accompanied by caramelized onions, pine nuts, herbs such as allspice and cumin and tahini.