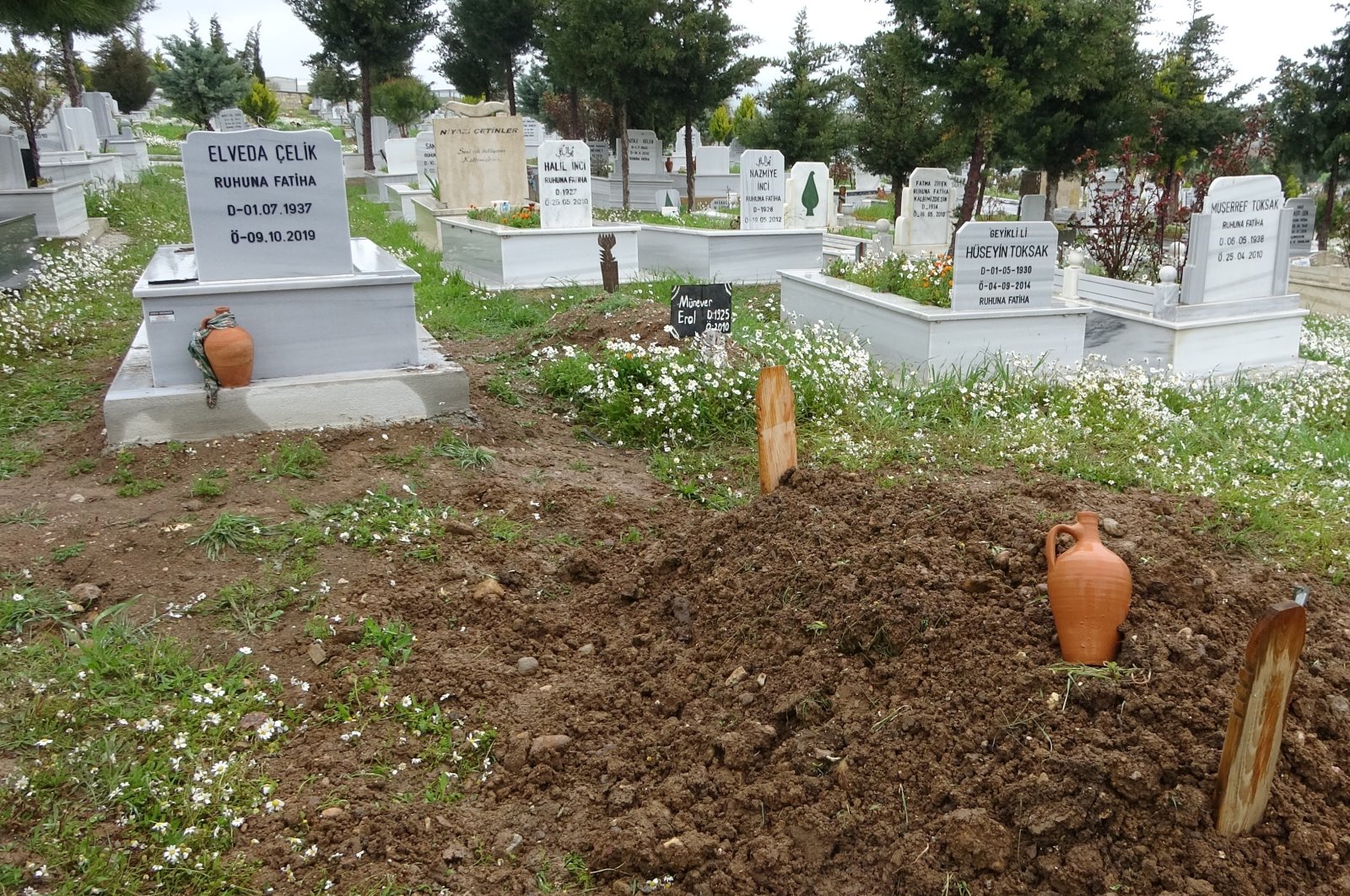 A view of the grave where the man thought to be Recep Çelik was buried, in Çanakkale, western Turkey, April 8, 2021. (İHA PHOTO)
by Daily Sabah with Agencies Apr 08, 2021 6:47 pm
RECOMMENDED

A grieving family in Turkey's western province of Çanakkale were overjoyed after learning that their father was alive after a bizarre clerical mishap that lead them to bury another man.

The family and the hospital administration blamed a series of strange coincidences and a clerical error for the mix-up which was resolved a day after the family of 96-year-old Recep Çelik buried 69-year-old Recep Yılmaz, a COVID-19 patient, by mistake.

It all started when Yılmaz was transferred to the same hospital as Çelik a few days ago. The hospital staff checked Yılmaz in as Recep Çelik, a cancer patient being treated at the same hospital, by mistake. When Yılmaz passed away on Tuesday, the day he was transferred to another hospital, Çelik’s family was notified. The family took the body and buried who they assumed to be their relative, only to receive a phone call from the hospital the following day about the mishap.

Speaking to reporters on Thursday, Hilmi Çelik said his father was staying in a nursing home when his condition worsened and he was hospitalized. “He was supposed to be taken to the intensive care unit but there wasn’t any vacant bed. When a vacant bed was found in another hospital, the patient named Recep Yılmaz was transferred there as he was checked in under my father’s name. We were not at the hospital at the time and thought it was our father who was transferred to the other hospital,” he said. The family sensed something wrong noticed that COVID-19 was listed as the cause of death. “We told the staff our father had tested negative before. Then, they took us to the morgue to check if the body was of our father. We were not allowed to come close to the body due to coronavirus risk. But it was our father as far as we could see. He had surgery mark on the same spot with our father and same hole on the side of his body. We could not see his face clearly but received the body anyway. We were not present at the burial, again, for coronavirus risk,” said Hilmi Çelik, recalling the post-mortem process.

The family was shocked when they received a call from the hospital, asking if a patient named “Recep Çelik” was related to them. When they entered the room, the elderly man was in the bed, and very much alive. “We were shocked. We cheered it but wondered who we had a funeral for,” Hilmi Çelik added. The family later contacted Recep Yılmaz’s family, who were looking for the “missing” elderly man. Yılmaz's body will now be exhumed from the Çelik family's plot where he was buried.

The hospital’s chief physician Professor Muammer Karaayvaz assured reporters that no medical error was made and the two patients' documents were simply mixed up. “Besides, they resemble each other very much. Both had the same surgery marks and a giant mole on their heads.”