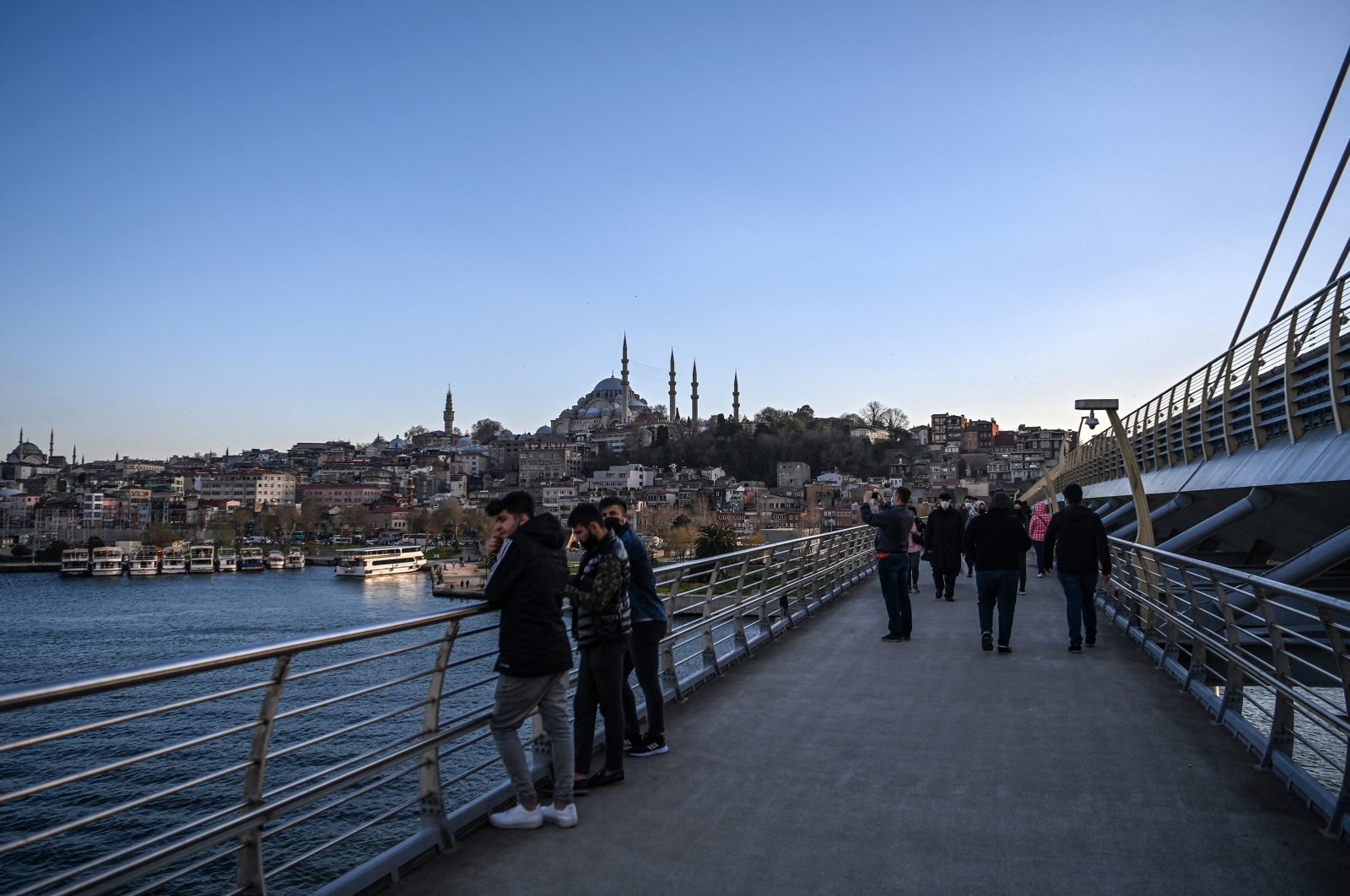 People walk on the metro bridge, with the Süleymaniye Mosque in the background, in the Karakoy neighborhood of Istanbul, Turkey, April 7, 2021. (AFP Photo)
by Daily Sabah with Agencies Apr 07, 2021 11:04 pm
RECOMMENDED

The upward trend continued Wednesday as Turkey reported 54,740 new daily coronavirus cases, health ministry data showed, in what was the highest single-day count since the start of the pandemic.

The daily count included 2,203 symptomatic patients. The total number of infections has reached 3.63 million, according to the data.

The country also reported 276 more fatalities in the past 24 hours, the highest level since the start of the outbreak, bringing the cumulative toll to 32,943.

Cases have surged since the government eased restrictions at the beginning of March.

President Recep Tayyip Erdoğan last week announced a tightening of coronavirus restrictions, including the return of weekend curfews in high-risk areas, as well as other measures.

The country will now return to full nationwide weekend lockdowns, and cafes and restaurants will switch to delivery-only service during the upcoming Muslim holy month of Ramadan, which starts on April 13.

However, as many as 35,503 more patients won the battle against the disease over the past 24 hours, the data showed, raising the number of recoveries to nearly 3.2 million.

More than 40.38 million coronavirus tests have been conducted in Turkey to date, with 302,108 done since Tuesday.

The latest figures showed that the number of COVID-19 patients in critical condition stands at 2,604.

Pressing ahead with its mass nationwide vaccination campaign that started in mid-January, Turkey has carried out nearly 17.97 million vaccine inoculations, according to official figures.

More than 10.55 million people have received first doses, while second doses have been given to over 7.41 million.

Since December 2019, the pandemic has claimed over 2.87 million lives in 192 countries and regions, according to figures compiled by the United States-based Johns Hopkins University.

Over 132.68 million cases have been reported worldwide, with recoveries nearing 75.37 million, the latest data shows.