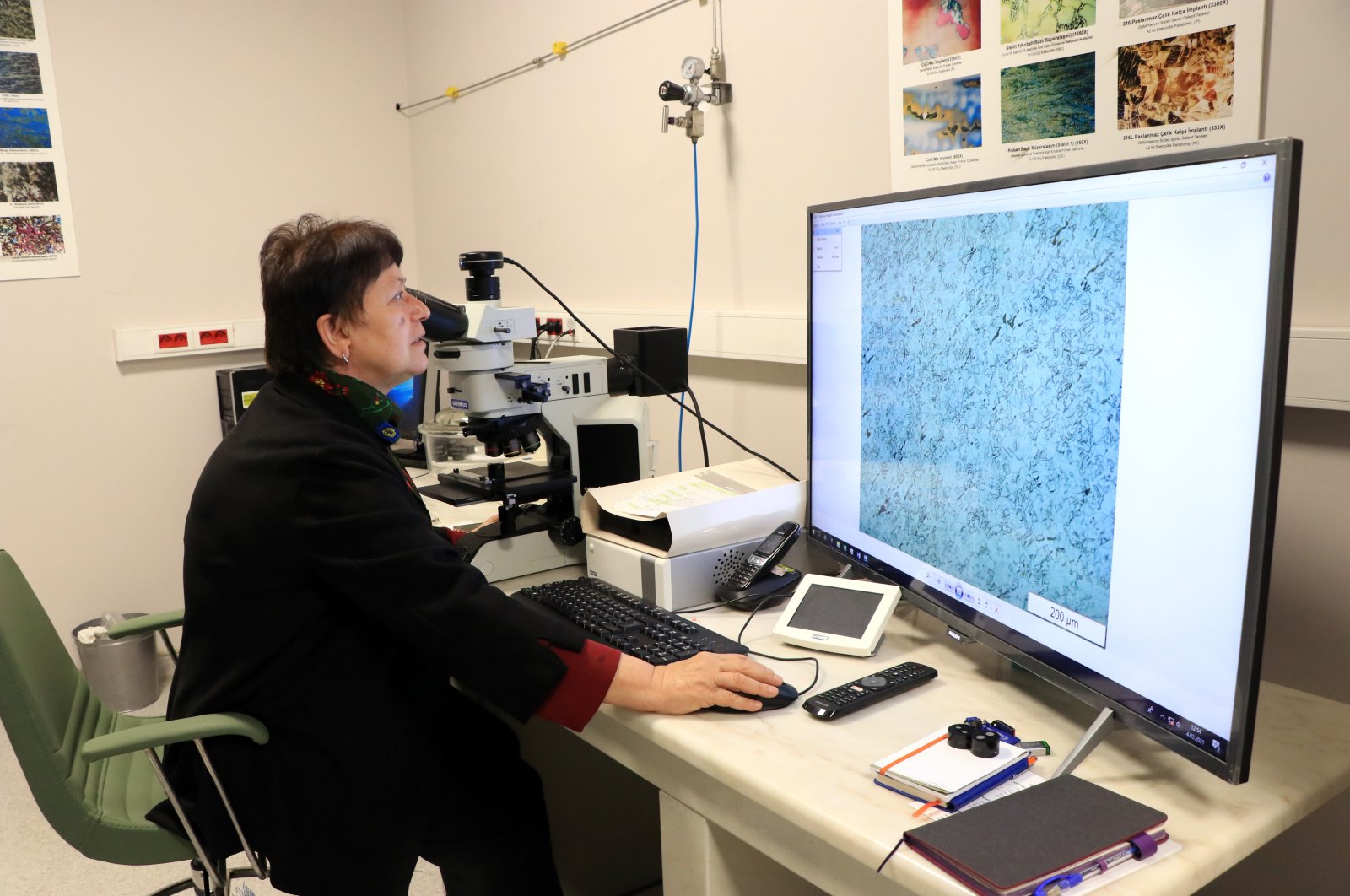 Associate Professor Havva Kazdal Zeytin is one of many female scientists contributing to Turkey's goal of being self-sufficient in its development rather than relying on imports.

A scientist at one of the country's leading scientific institutions, Zeytin said on International Women's Day on Monday that she was proud to play a role in the production of the turbine blades used in Turkey's first national helicopter engine.

Zeytin has been conducting studies at the Marmara Research Center (MAM) of the Scientific and Technological Research Council of Turkey (TÜBITAK) for 30 years.

Working in the private sector as an engineer for four years after her post-graduate studies, Zeytin began her career at TÜBITAK-MAM in 1991 due to her strong passion for research. Having made strides for the Turkish industry through her work, Zeytin recently played a significant role in producing single-crystal turbine blades, which are among the most critical technologies, in cooperation with TÜBITAK and Tusaş Engine Industries (TEI).

Zeytin told Anadolu Agency (AA) she was born in the village of Muradiye in Rize in the Black Sea region and lived there until finishing primary school. Noting that her father took the family to Istanbul where he started a business, she said: "I left Rize in 1973. When you leave Muradiye Primary School and start studying in Nişantaşı, Istanbul, you feel like a fish out of water. My speech was not smooth; I was speaking with an accent peculiar to the Black Sea. I was discriminated against in the classroom when I started secondary school, but I got accustomed to it shortly."

Zeytin said she graduated from the Metallurgical Engineering Department at Istanbul Technical University (İTÜ) and worked in the private sector after completing her master's degree at the same university. "As a 24-year-old female engineer, I started working in an aluminum piston factory with 150 workers. I worked in the foundry for about 2.5 years. I was the only female engineer. That place taught me a lot."

Zeytin said she worked at one of Turkey's largest aluminum factories for 1 1/2 years. "I worked in production planning, but it did not seem to be enough for me. The urge to conduct research was very intense. I applied for a job at TÜBİTAK-MAM's Institute of Materials. I started working at the institute in 1991," she said.

Stating that she has been involved in many projects at the TÜBITAK-MAM Materials Institute over the course of 30 years, Zeytin continued: "I worked on a wide variety of projects, but our biggest project was about automotive steel with support from the Development Ministry in 2005. We started working on steel with this project. We carried out amazing work, making high-strength, light steel. It is particularly important for the automotive industry. There was a project on steam turbine blades; they wanted me to work on that project with a forging company. People said, 'No one can do it in Turkey.' We took the project it in 2012 and delivered the first steam turbine blades in 2013."

Explaining that when national projects related to aviation were launched, the Defense Industry Undersecretariat started the Defense and Security Technologies Research Group project over TÜBİTAK, Zeytin said: "We started to work on the project, but the infrastructure of our foundry was insufficient. We submitted a feasibility report and asked for a budget. They received their first grant from TÜBITAK-MAM in 2013, she said, adding: "After receiving that budget, we ordered our vacuum induction furnace in our foundry. We produced the prototype of plane engine turbine blades as a single crystal on that device. TEI was assigned to develop a turboshaft engine, and TÜBITAK-MAM to develop turbine blades of that engine. We participated in the project with a consortium. I was assigned to be the chief of the critical metallization materials team. I was responsible for writing the projects, research and development planning, selecting and purchasing equipment, preparing technical contracts, training and the establishment of the team."

Zeytin added that they started the project with 10 people before expanding the group to 30 people. She said, "We always hope to be in the material development part of the business." Speaking on the role of women in the industry, Zeytin said: "As a woman, it is not easy to work in heavy industry like metallurgy, but you can achieve this. It is crucial to believe in achieving." Zeytin emphasized how smart and hardworking Turkish women are and said: "There are many women who manage their lives on their own, who have been given no opportunities. I think our country will develop much faster if those women participate in business life." Calling science a favorable field for women, she went on to say: "Our intuitions are powerful. We can look from very different viewpoints, and this is how research needs to be. Foresight and emotional intelligence should be very high. So I believe women will be very successful in the field of science, though it requires selfless work."