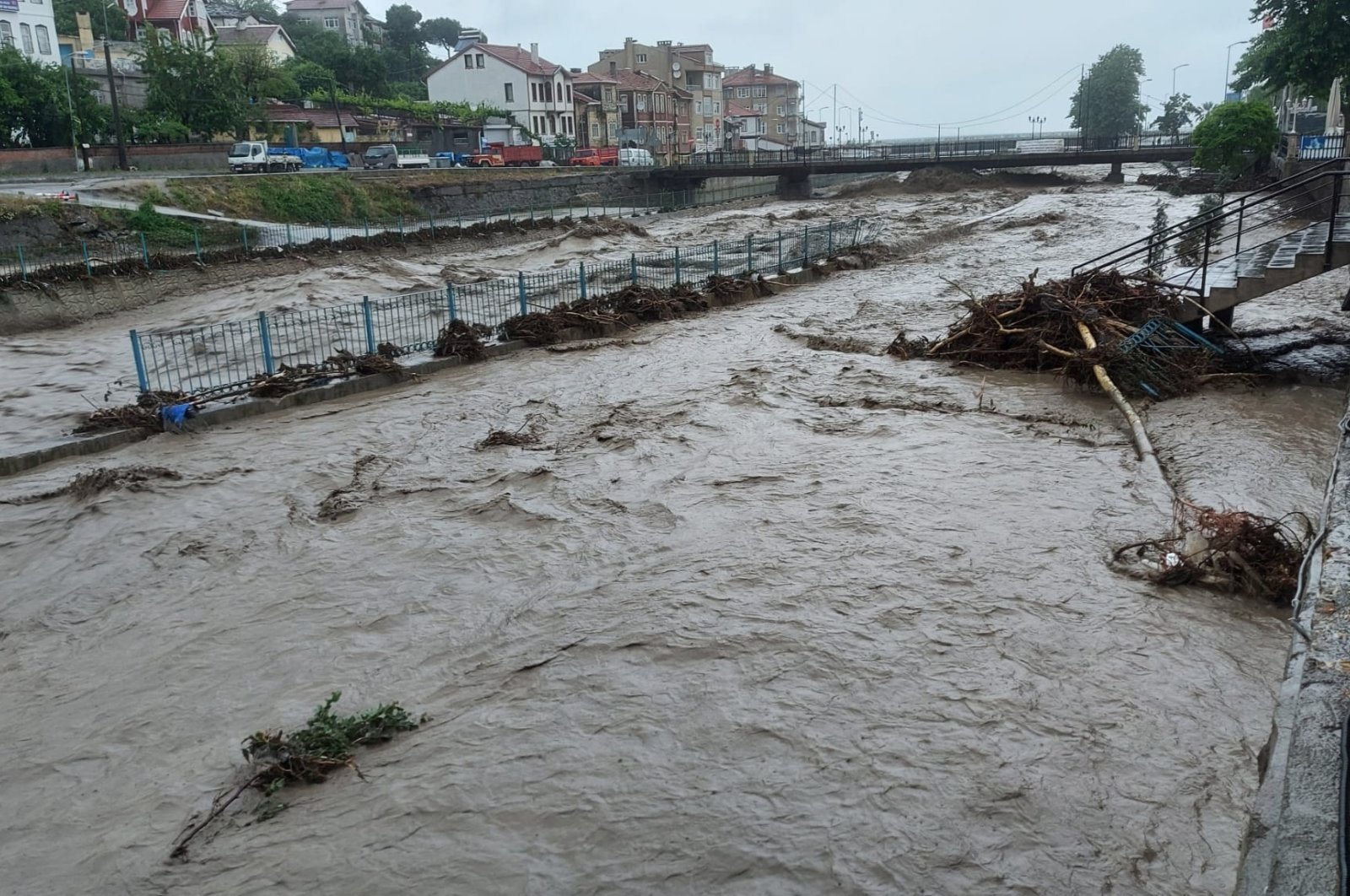 Several provinces in northern Turkey were hit by floods on Monday, two months short of the anniversary of a similar disaster that killed dozens in the Kastamonu province, though no casualties were reported as raging waters inundated districts of Kastamonu, Bartın, Sinop, Zonguldak and Bartın provinces

Basement floors of houses were filled with floodwaters, while the local municipality warned the owners of shops on the first floors of buildings not to open. Locals were also urged not to approach the banks and to take shelter on the upper floors of buildings if their first and basement floor residences are at risk. Downpours continued into Monday and also caused sporadic power outages. Two iron pedestrian bridges over the stream collapsed in the floods. The floods also led to the closure of a road connecting the district to central Kastamonu.

Inebolu is some 25 kilometers away from Bozkurt, a district of Kastamonu where more than 80 people lost their lives when dire floods swept away houses on the banks of a stream in one of the worst floods in the Black Sea region in decades. Bozkurt was again hit by floods as well with the Ezine stream flowing along the town overrunning its banks, damaging bridges and inundating nearby roads. No casualties were reported.

Turkish State Meteorological Services (TSMS) and the Disaster and Emergency Management Authority (AFAD) issued a “red code,” the highest emergency alert for weather-related incidents, for Kastamonu. Interior Minister Süleyman Soylu tweeted that AFAD President Yunus Sezer traveled to Inebolu to coordinate a response to the incident, adding that authorities repeatedly warned the locals to take measures while bulldozers and other heavy equipment were dispatched to the district to provide assistance in case of worsening floods. The local governorate readied search and rescue crews and divers for potential emergencies.

Inebolu District Governor Ahmet Vezir Baycar told reporters that they were prepared since the weekend after the TSMS and the AFAD warned of possible floods. “We don’t need to panic but should act cautiously. By God’s will, we will overcome this situation without losses and with the least risk,” he said.

Later on Monday, AFAD renewed its warning to residents of Kastamonu and the nearby provinces of Zonguldak, Karabük, Bartın and Sinop, calling those on the path of floods to move to safer higher ground and not to park their vehicles near the streams. AFAD said the risk was particularly high for the Kastamonu districts of Inebolu, Bozkurt, Abana, Çatalzeytin, Küre, Pınarbaşı, Şenpazar and Cide, central Karabük and Karabük's Ovacık and Safranbolu districts, Zonguldak's Devrek and Gökçebey, central Bartın and Sinop's Ayancık district, which was also heavily damaged in last year's floods.

In Bozkurt district, firefighter crews rushed to evacuate those trapped in their first-floor homes. Bilal Bilge, one of the evacuees, told Anadolu Agency (AA) that the rain was "very heavy" since Sunday night. "(Authorities) did a lot this year to prevent another flood like in 2021. But a massive amount of water still washed away Bozkurt," he said. Musa Gerişli, evacuated from his village home with his wife, said he had repaired his home damaged by the 2021 floods but never thought "it would repeat." "It looks like there is more water than last year. Floodwaters are not as high to reach my home but they evacuated us anyway as a precaution," he said.

Floods also triggered landslides, including one that closed the main road connecting Inebolu to central Kastamonu.

Floods also disrupted life on Monday in Kastamonu’s neighboring provinces Sinop and Bartın, which were also affected by the deadly August 2021 floods. In Bartın's Kozcağız district, floodwaters descending into the area located on the outskirts of a hill inundated houses and roads, including a floor of the local bus terminal. A road connecting Kozcağız to Çaycuma district was closed by floodwaters.

In Sinop’s Türkeli district, raging waters of a stream after a heavy downpour inundated a mosque and several houses. Temporarily built bridges that replaced older ones damaged in last year’s floods were closed for crossings in three villages of Türkeli, shutting down access to some 15 villages while a street in central Türkeli was closed due to flooding. In Bartın, floodwaters inundated basement floors of houses after three days of sporadic rainfall, while crews cleared a road closed due to floods on Monday. Crews were working to drain floodwaters in some neighborhoods.

The Black Sea region is prone to floods due to its rainy climate, but they became worse in recent years, claiming more lives. Experts tie it to climate change which aggravates the amount of precipitation. On the other hand, haphazard, faulty development also plays a role in the catastrophic consequences of floods. A report by Turkish police on the 2021 floods in the region had pinpointed those two factors as causes of casualties. Specifically, it pointed out that the "narrowed" bed of Ezine Stream led it to overrun its banks. The construction of residential buildings on the riverbed, the presence of a timber storage area near the same bed and faulty construction of bridges along the stream are among other factors listed in the report as culprits of the high death toll and damage.

Floods are often worsened by the development of river beds, something unfortunately common in the Black Sea region where rough, uneven terrain leaves little space for the construction of new residential areas for locals. Yet, experts say this should be prevented to minimize the damage from future floods.