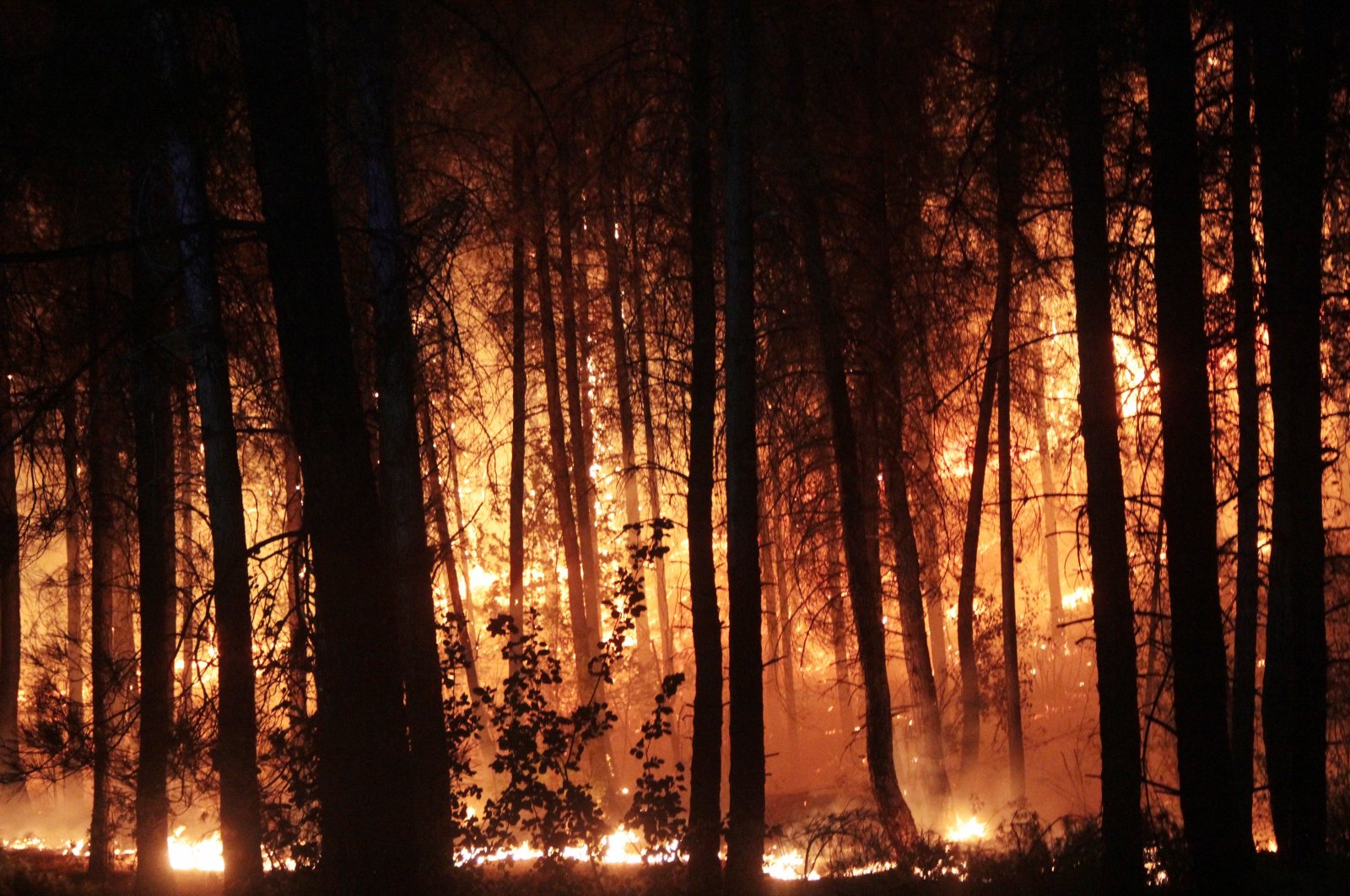 A week on, forest fires still have a hold of parts of Turkey's southern provinces of Antalya and Muğla as firefighters strive to bring the flames under control at new hot spots in the country's west

Turkey managed to bring 152 fires in 32 provinces under control but new flare-ups are adding to the country's woes. Manavgat, where the first major blaze broke out one week ago, is still grappling with the flames as new fires erupt in the western regions of Isparta, Denizli, Balıkesir and Manisa over the last two days.

Official figures from Tuesday show two fires underway in Antalya’s Manavgat and Gündoğmuş districts. Muğla has the most fires with five out of 13 blazes still threatening popular vacation resorts and rural areas in the districts of Marmaris, Köyceğiz, Menteşe and Milas.

The Directorate of Forestry announced on Wednesday that 174 fires broke out in the last eight days in 39 provinces and 160 of them were under control. The directorate said 16 water bomber planes, nine drones, 45 helicopters and around 5,250 firefighters had been mobilized to put out the fires.

In Milas, a massive blaze encircled a thermal plant, coming within just 1 kilometer of the facility. Authorities announced that ditches had been dug around the plant to prevent flames from reaching it. Local authorities said on Wednesday that the fire was under control. "The flames reached the wall of the power plant last night. The fire is now out," Milas Mayor Muhammet Tokat told Reuters. Two planes and four helicopters had helped firefighters on the ground to douse the flames, he said, and the power plant had resumed operations. Tokat said he had requested aerial support to the area around the power plant days ago while he was visiting a nearby neighborhood damaged by the blaze. Tanks with flammable materials at the plant were emptied as a precaution, Demirören News Agency (DHA) reported.

The Ministry of National Defense said in a statement that a patrol boat and landing craft had been sent to Milas and the nearby Ören district to support extinguishing efforts and for possible evacuation of locals from fire-hit areas by sea. The fires have prompted the evacuation of dozens of neighborhoods in Antalya and Muğla since last week.

In Isparta, firefighters and locals are battling a fire in the Sütçüler district as Denizli, Balıkesir’s Savaştepe district and Akhisar district of Manisa work to put out forest fires.

Fires in Denizli affected Buldan and Tavas districts, where hundreds of locals assisted in the extinguishing work. The fire that started on Monday in Buldan was brought under control but reignited, a day before another blaze appeared in Tavas.

Investigations are underway into the causes of the fires, which are exacerbated by strong winds and extreme temperatures, with suspicions focusing on the PKK terrorist group. Late Tuesday, Anadolu Agency (AA) reported that a 16-year-old suspect had been remanded in custody in Antalya on charges of deliberately starting a forest in Manavgat. The suspect was detained on July 30, two days after a fire broke out in the district's Kavaklı neighborhood.

At least eight people have lost their lives in the fires since they started last Wednesday while dozens of others have been hospitalized for burns and smoke inhalation. The victims include elderly locals trapped in fire-hit regions, two firefighters in Manavgat and a young volunteer aiding firefighters in Marmaris of Muğla.

Turkey's high-tech drones are playing a key role in battling the forest fires. The country's Directorate of Forestry uses state-of-the-art technology to shorten the detection, response and extinguishing time of forest fires, according to information compiled by Anadolu Agency (AA). With drones assisting the firefighting fleet, Turkey monitors around 1,650 kilometers (1,025 miles) of the area from the country's largest city Istanbul to the southern border city of Hatay as well as the Turkish Republic of Northern Cyprus (TRNC). Through extensive surveillance by drones, the size of the fire can be assessed more quickly and a precise response can be delivered with the ascertained information. Drones are particularly helpful at night, monitoring the general course of fires, detecting heat points and assisting in determining intervention spots to prevent the flames from spreading to larger areas. Footage captured from the field by unmanned aerial vehicles (UAVs), which serve around the clock during fire risk periods, are monitored instantly at Turkey's Fire Management Center.

Images taken by the drones are transferred to computers via the internet. The whereabouts of vehicles like water trucks, construction equipment, first responders, airplanes and helicopters are displayed on the computers, which are integrated into the Vehicle Tracking System, which includes a vector map that is able to pinpoint water resources. When image processing and artificial intelligence detect a possible fire in the UAV images, an alarm is generated and a text message is sent. By detecting thermal heat sources in the UAV image, the geographical coordinates of those regions and the distance between them is calculated. These high-tech innovations have drastically shortened Turkey's fire response time from 40 minutes in 2003 to just 12 minutes in 2019, and hopes run high for a quicker response still.