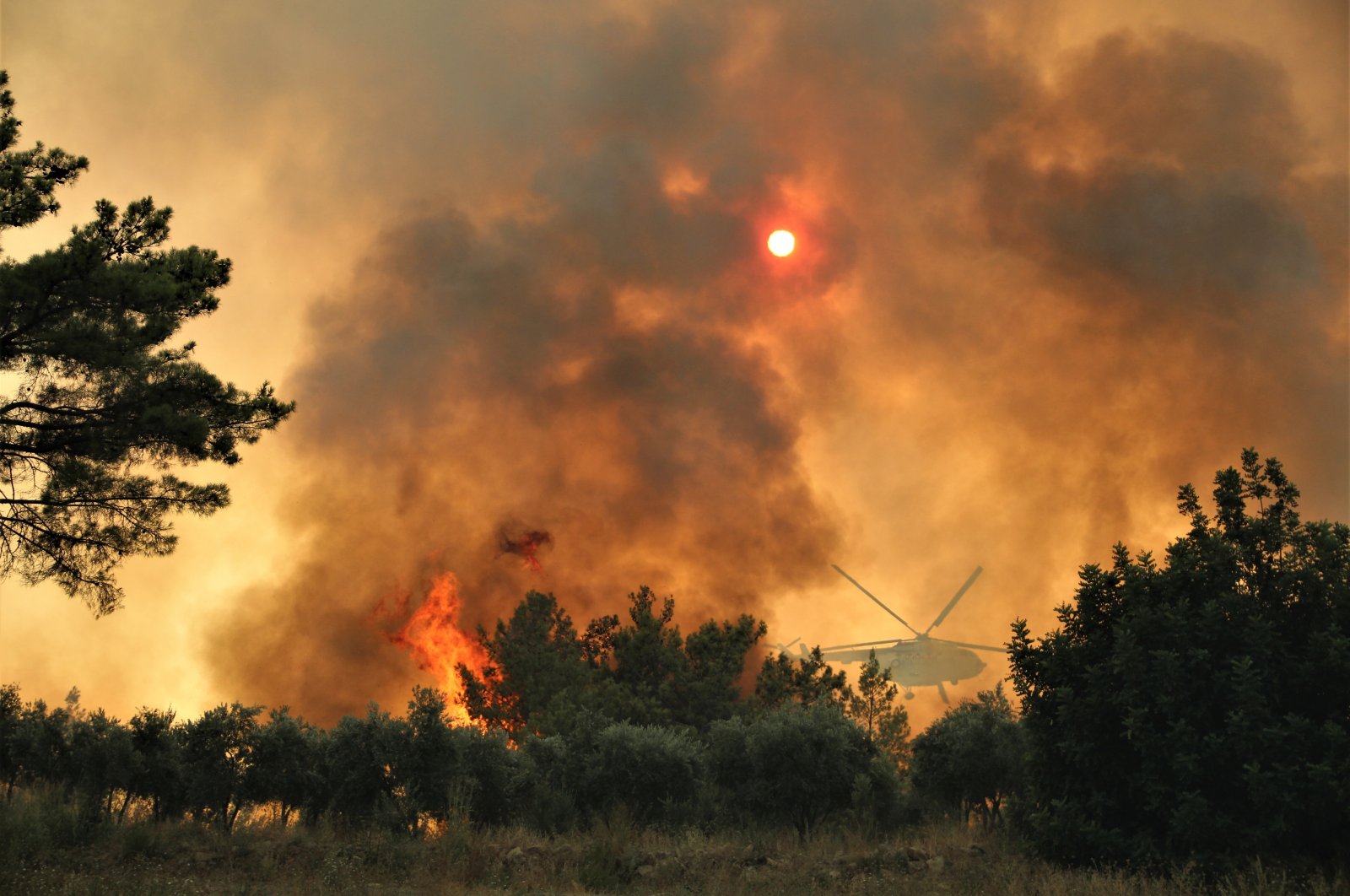 Turkey’s weeklong efforts to contain wildfires raging across the country paid off, but 13 fires that started this week and last are still bearing down on southern provinces

Since July 28, when the first large-scale blazes broke out, Turkey confronted some 187 forest fires, from Muğla to Adana. As of Thursday, 172 of them had been contained according to official figures. The remaining wildfires, however, show no sign of abating and more people are evacuating affected areas.

Thousands of firefighters, volunteers, helicopters and water bomber planes are working to extinguish the fires threatening residential areas. One of the most critical fires broke out in Muğla, with flames engulfing a coal-fired power plant, triggering environmental concerns. Reports early Thursday said the massive fire had come within just one kilometer of the facility, and that it had been contained. Authorities announced that the fire did not damage the main units of the plant. The Ministry of National Defense sent ships to the area to evacuate locals by sea early Thursday.

Currently, new and old fires are still raging in Antalya’s Manavgat and Gündoğmuş districts, in Muğla’s Marmaris, Köyceğiz, Kavaklıdere, Milas, Menteşe and Seydikemer districts, in Aydın’s Karacasu, Denizli’s Tavas and Güney and Hatay’s Dörtyol. In Manavgat, where the first major fire in the country’s Mediterranean region broke out, flames are still engulfing forests, days after they gutted rural neighborhoods, killing at least seven people. In neighboring Muğla, forests near population vacation resort Marmaris were burning for the seventh day. In Bodrum, a fire that broke out last Saturday continued on into Thursday. Bodrum District Governor Bekir Yılmaz told Anadolu Agency (AA) that firefighters and police, with the help of water cannons and volunteers, were fighting the raging fire in the resort town by land and air. He said the fire had been partially extinguished and that they have so far managed to prevent the flames from reaching residential areas on Thursday.

He explained that unfavorable weather conditions fanned the flames and spread them to a wider area. “Thankfully, we have no casualties. We have some damaged houses, businesses and vehicles in the Mazı neighborhood,” he said. Yılmaz said they evacuated 1,500 people from an area affected by the fire who were being accommodated at hotels. “We can’t say that the fire is totally under control but we work day and night. This is a fire Bodrum has not seen before,” he said.

Agriculture and Forestry Minister Bekir Pakdemirli told reporters earlier this week that temperatures in Marmaris alone had reached an all-time record of 45.5 degrees Celsius (114 degrees Fahrenheit) this week. "We are fighting a very serious war," the minister said. "I urge everyone to be patient."

On Wednesday, President Recep Tayyip Erdoğan likened the forest fires to the COVID-19 pandemic, describing them as "a global threat." Speaking in a televised interview, Erdoğan said the whole world was currently facing this challenge, which is like a "terrorist threat," pointing to forest fires in Europe, the United States, Canada, Russia and other locations. Erdoğan said some 51 helicopters and 20 planes were engaged in operations to douse the wildfires. He noted that Turkish intelligence and police are thoroughly investigating the origins of the fires.

Erdoğan said Azerbaijani President Ilham Aliyev has pledged to send another amphibious aircraft, which is currently undergoing maintenance, to Turkey to support its ongoing battle against the forest fires in its southern provinces. Foreign Minister Mevlüt Çavuşoğlu said Wednesday that Azerbaijan will send a new team to help Turkey in its firefighting efforts. A total of 160 personnel, 40 fire trucks and a plane will arrive from Azerbaijan early Thursday, Çavuşoğlu said. This will be the third team Baku has sent to assist Turkey's fight against the wildfires.