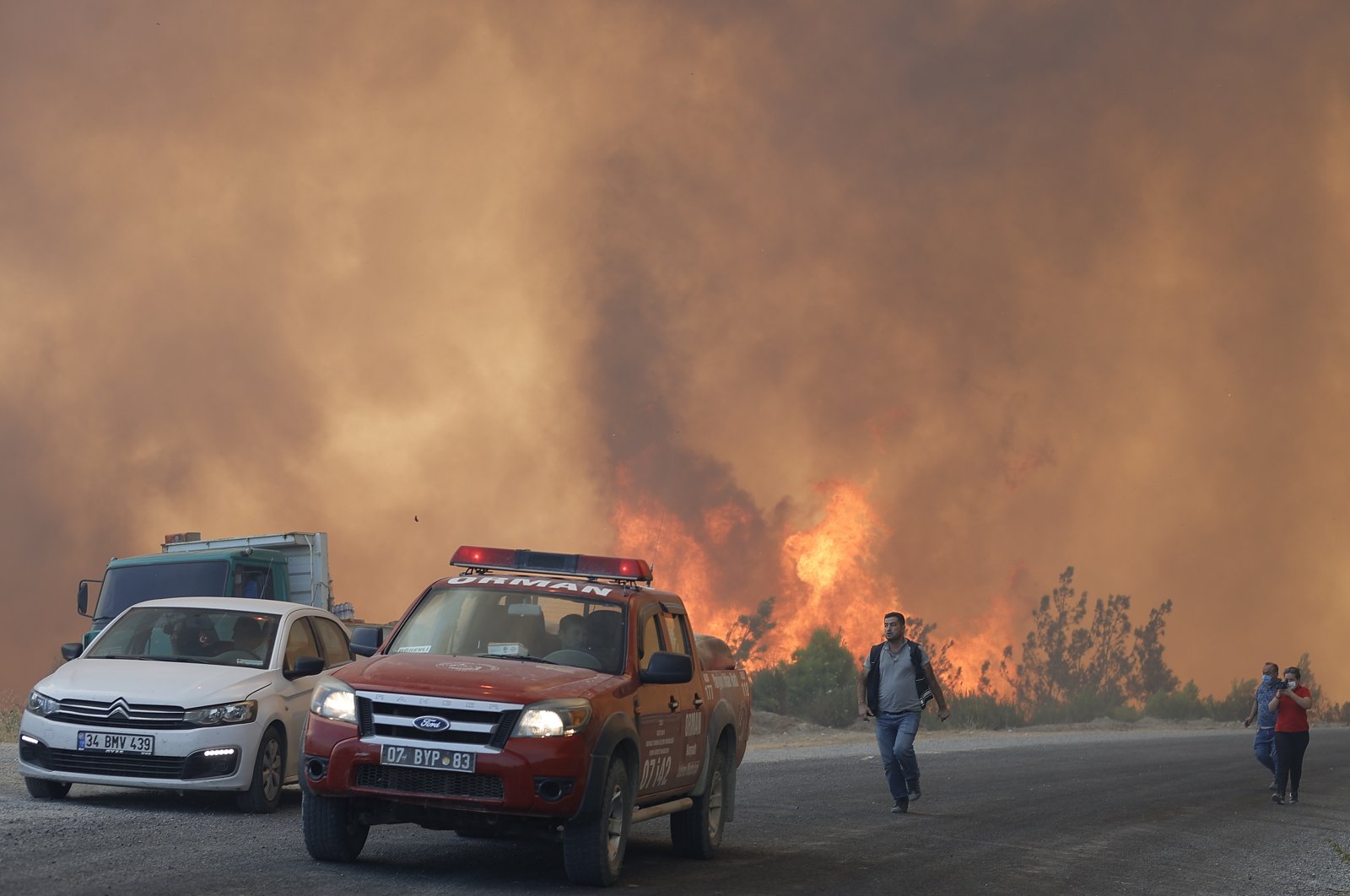 The number of forest fires that have gripped the country since last week dropped to five from 107. Meanwhile, Turkey continues to suspect the fires may be linked to arson by the terrorist group PKK, whose affiliate threatened arson attacks Sunday

Turkey wrapped up a week in the fight against forest fires that devastated its southern region with relative success. The causes of the forest fires are still not clear, but suspicions center on the terrorist group PKK, whose members were behind previous forest fires in the country. An affiliate of the terrorist group did not directly claim responsibility for the fires but openly threatened the country with arson attacks targeting both its forests and people on Sunday.

As of Sunday, 107 out of 112 wildfires across the country are under control, the Minister of Agriculture and Forestry Bekir Pakdemirli announced. President Recep Tayyip Erdoğan, who was in Antalya to visit the affected areas, said multiple investigations were underway to find the possible perpetrators behind the fires. "We hope that our police, gendarme and intelligence units will analyze every sign, information and intelligence on this issue. We are disturbed by the sabotage suspicion. If there are traitors who have gone so far to set our country on fire, it is our duty to nab them and ensure they receive the harshest punishment," Erdoğan said.

The president said that they were aware that the number of forest fires and areas affected by forest fires doubled after the leaders of "the terrorist group" instructed their subordinates to set forests on fire last year. He was referring to the PKK. "We are determined to wipe out the cells of terrorist group in cities, just like we are close to ending their presence in the mountains and beyond our borders," Erdoğan added.

Turkish people on social media were quick to put the blame on the PKK-linked "Children of Fire Initiative" late Thursday for a series of fires that have hit Turkey recently, as PKK sympathizers also hailed the fires on Twitter. The PKK has a long history of burning Turkey's forests as a method of "vengeance" against the Turkish state, causing civilian deaths and environmental destruction in the process. The almost consecutive nature of fires triggered concerns that they might be the result of a string of arson attacks, which Turkish netizens blamed the PKK for. The so-called "initiative," in a statement published on their website, threatened the country with new arson attacks Sunday. The group said they would carry out arson attacks everywhere, along with sabotage attacks. It called upon its members to kill anyone opposing the terrorist group by starting fires.

One of the PKK’s highest-ranking members, Murat Karayılan, also previously hailed the method of using arson in terrorist attacks in a statement. “Two or three youths may well gather and do something. They may say ‘we don’t have a weapon’ but their weapons are lighters and matches,” he said. The PKK-linked group used almost verbatim these sentences in their threat.

Şemdin Sakık, another high-ranking PKK terrorist, also previously said that the terrorist group would resort to similar actions if need be. “If we run out of weapons, we will go to Bodrum and burn their yachts, go to Antalya to burn their greenhouses, go to Istanbul to burn their cars and go to Izmir to burn their forests,” he said.

Last October, four provinces around Turkey also fell victim to the PKK’s hatred of nature, with almost simultaneous fires destroying forests in various parts of the country. Turkish authorities were quick to detain suspected arsonists who burned forestland in southern Hatay province’s Belen district, and it was not long before a PKK-aligned terrorist group claimed responsibility for the attack. The "Children of Fire Initiative" glorified the attacks on Turkey’s forests, praising the terrorists who initiated the fire. The so-called "initiative" was responsible for many arsons in recent years, and the group is known for its close ties to the PKK terrorist group.

Meanwhile, PKK sympathizers took to social media and further manifested their hatred of forests with jokes making fun of the fire, in a collective effort of terror propaganda. Sharing the links of PKK-linked websites Fırat News Agency (ANF) and Nuçe Ciwan’s articles that glorify the arsons, the group’s sympathizers continued to celebrate the damage dealt to the environment by the terrorists. In 2019, the group also claimed responsibility for wildfires in Turkey's western, northwestern and southern provinces, declaring "fiery revenge" against the state.

Arson attempt at base

Suspicion over the role of the terrorist group in forest fires grew with an incident on Sunday. Two suspects set a shrubbery near a military base housing a training center for Turkish soldiers on fire. When soldiers guarding the base noticed them, they fled. The fire department of the base extinguished the flames before they could spread into the base. Security sources quoted by Anadolu Agency (AA) said it was a sabotage attempt to burn an area housing the barracks of the base. An investigation was launched into the arson attempt.

On July 28, a suspect was captured outside a military base in the capital Ankara’s Polatlı district as he set a grassy patch inside the base on fire. The suspect had reached through fences surrounding the base, home to a school for artillery officers. A passerby noticed the attempt and nabbed the suspect, who was then handed over to law enforcement. The small fire, which damaged trees inside the base, was put out.

The first major fires started last Wednesday and the biggest among them broke out in the town of Manavgat, in the Mediterranean province of Antalya. The blaze still continues as firefighters, aided by water bomber planes and helicopters, struggle to contain flames that gutted hundreds of houses, mostly in villages. Overall, 13 fires broke out in the province’s Manavgat and Gündoğmuş districts and only two remain burning.

A fire in the Gazipaşa district, which threatened to spread to other towns in the area, was extinguished as of Sunday. In Antalya’s western neighbor Muğla, a province also home to popular vacation resort towns, three out of eight fires are still burning, affecting the towns of Marmaris, Köyceğiz and Milas. Another major fire in Bodrum, a gem in “Turkish Riviera” wildly popular among local and foreign tourists, was also contained. In Adana, the southern province that saw 20 wildfires break out since Wednesday, all fires were brought “under control,” officials announced.

Though the fires are under control, flames are still seen while cooling efforts are hampered by occasional strong winds fanning the flames. The wildfires were deadliest in Antalya, where five people, including two firefighters, were killed after they were stranded in the midst of fast-spreading flames. The sixth victim was a young man trying to aid firefighters in Marmaris, who died when his motorcycle crashed in a fire-hit area and he was caught in the middle of a forest fire. On Sunday, media outlets reported that a Turkish man and his German-Turkish wife were also found dead in their burned home in Kalemler village in Manavgat, bringing the death toll to seven in the town. The blazes left a large number of people homeless, especially in Manavgat.

The country has declared the place “a disaster area” and pledged aid and new residences for locals affected by the fires. Most were villagers, who, along with their homes, lost livestock, their main source of income. A total of 42 rural neighborhoods were affected by the fires, with forced evacuation occurring in 27 neighborhoods. Some 279 people were hospitalized for smoke inhalation and burns in Manavgat, where the first fires started in four different spots. On the fifth day, small fires are still burning in the Sırtköy area of Manavgat and on the slopes of Güğlen Mountain. In Kalemler, one of the villages most affected by the Manavgat fire, bulldozers started demolishing houses that were completely burned or heavily damaged by the fire on Sunday. Locals are taken to a safe location in the district where aid delivery spots were established.

In Marmaris and Köyceğiz, firefighters spent Saturday night fighting flames on the ground as the night impeded efforts to intervene from the air Helicopters and planes resumed operations on Sunday morning. In Marmaris, 100 firefighters dispatched by Azerbaijan aided local firefighters on Sunday.

A fire that began in the Armutalan neighborhood quickly spread to eight neighborhoods heavily populated by holidaymakers. A fire in Milas had spread to Bodrum, prompting evacuation in the Mazı neighborhood.

At a press conference in Muğla on Saturday, Minister Pakdemirli had warned that caution will be needed to combat the massive fires on Sunday when humidity is expected to drop 10%. Blazes broke out in at least 21 provinces, including several Mediterranean provinces.

President Erdoğan said on Saturday that $5.91 million (TL 50 million) has been allocated to meet the urgent needs in areas that have experienced destruction and property damage. He said Turkey was mobilizing all means to bring the blazes under control.