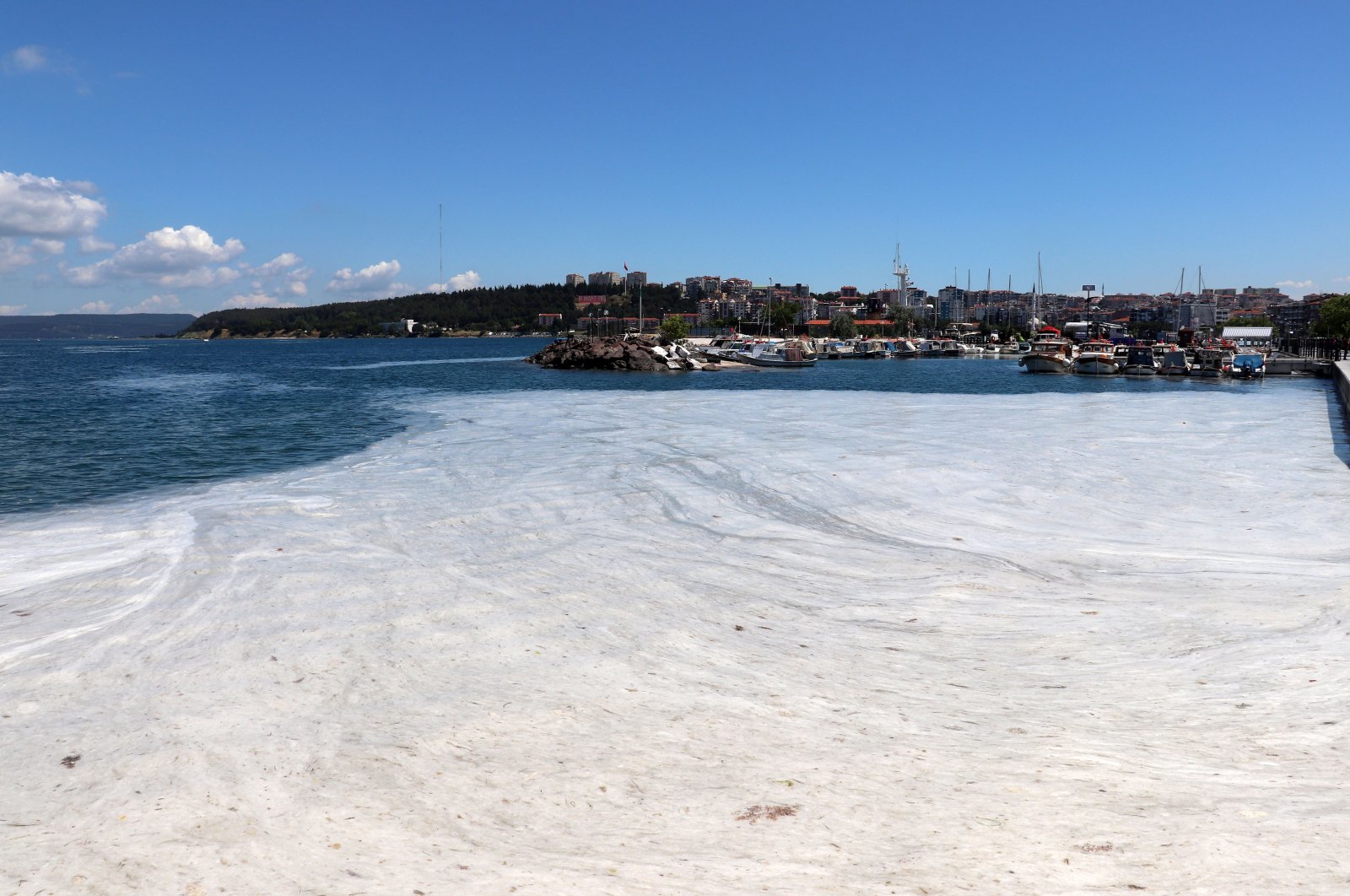 Sea snot covering parts of the sea in Çanakkale, which is one of the closest locations to the Greek island of Lemnos, Çanakkale, western Turkey, June 21, 2021. (DHA PHOTO)
by Daily Sabah with Reuters Jun 25, 2021 2:21 pm
RECOMMENDED

"Sea snot" or marine mucilage which has been affecting Turkey's Marmara Sea may have made inroads into Greece. Scientists in the neighboring country are examining whether the mucus-like layer of microorganisms sighted off the coast of the Greek Aegean island of Lemnos is connected to the sea snot in Turkey.

Lemnos is situated southwest of Gökçeada and west of Bozcaada, the Turkish islands and districts of Çanakkale province. Although not as dense as in other Turkish provinces littoral to Marmara, Çanakkale, on the southwest of Marmara, has its share of sea snot. A total of 678 cubic meters (23,943 cubic feet) of sea snot was cleaned off the shores of Çanakkale in the past 17 days, Ministry of Environment and Urban Planning had announced Friday.

Authorities on Lemnos, which has about 30 sandy beaches, have reported mucous spots on parts of its coastline and in the sea to the north, east and west of the island.

Greece's environment ministry has tapped experts on oceanography and marine biosciences monitoring the phenomenon via satellites and drones "to determine if and to what extent the phenomenon in the sea of Lemnos is linked with the planktonic mucous intensely evident in (the Marmara Sea)." The experts are using the Sentinel-2 satellite of the European Union's Copernicus program and will also rely on visual input from drones, the ministry said.

Scientists say climate change and pollution have contributed to the proliferation of the organic matter, also known as marine mucilage, which contains a wide variety of microorganisms and can flourish when nutrient-rich sewage flows into seawater.

Drone footage shot over the Marmara Sea has shown ferries and cargo ships crisscrossing harbors and seawater blanketed with the viscous, greyish substance that can suffocate marine life.

A Greek coast guard official told Reuters spots of mucilage were visible at some of the island's beaches. Local authorities have sent samples to the state chemistry lab for analysis and are awaiting the results. "Heat in the last days may have led to an overproduction of phytoplankton but we must wait for the results," the official said.

Theodosis Dalavitsos, head of Lemnos's environment service, said the slimy layers were phytoplankton that tend to appear every year due to the stillness of sea waters and high temperatures. "It appears every year and we can't connect it to (the sea snot) of Marmara," he said. The service sent samples of seawater from different spots of the island to a private laboratory in Athens but oceanology experts need to look into the cause of the phytoplankton formation, he said.