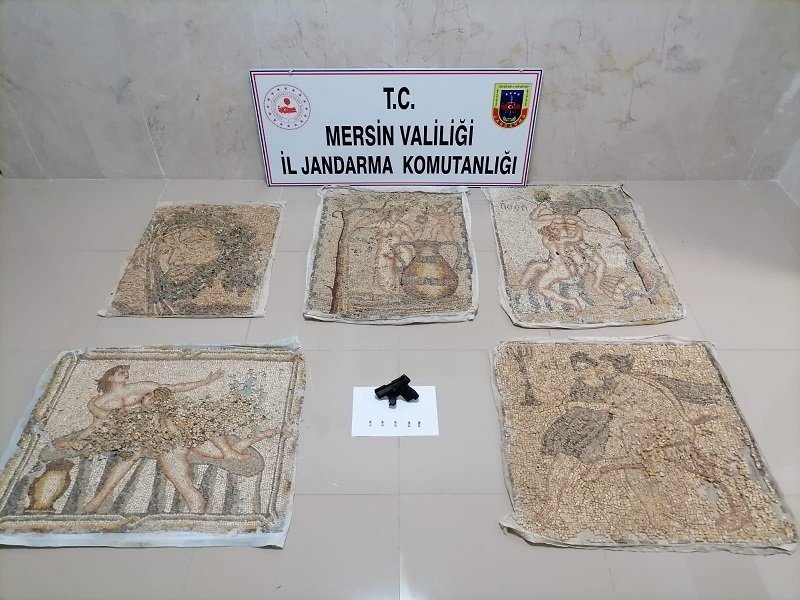 Gendarmerie teams fighting organized crime in southeastern Şanlıurfa province raided the address of a suspect, who had been found to have smuggled historical artifacts. Some 110 ancient gold coins were seized during the operation in the district of Viranşehir. Artifacts belonging to the Byzantine period were handed to local authorities.

Separately, five mosaic paintings believed to be historical artifacts were seized in southern Mersin province, and a suspect was arrested, according to the local gendarmerie command.

Gendarmerie teams acted on a tip off that a suspect was trying to sell historical artifacts in his workplace, it said in a statement, adding that an unlicensed gun, a charger and five cartridges were also confiscated during the raid in Yenişehir district. The suspect was later released by a court pending trial, the statement said. The paintings were handed to the provincial authorities to be examined.

In southwestern Muğla province, gendarmerie forces seized a 42-gram rare Athens Greek coin and arrested six suspects in an operation launched in Ortaca district. It is said that there are only 42 such Athens Greek coins – dating back to the fifth century B.C. In an anti-smuggling operation in northwestern Ardahan province, gendarmerie teams found ancient sculptures of the Virgin Mary, the Greek goddess Artemis and a Viking in a village in the Göle district.

Artifact smuggling is unfortunately common in Turkey, which historically has been home to a diverse array of civilizations. Last year, 65,000 artifacts were seized at once in one of the biggest anti-smuggling operations in the country's west.