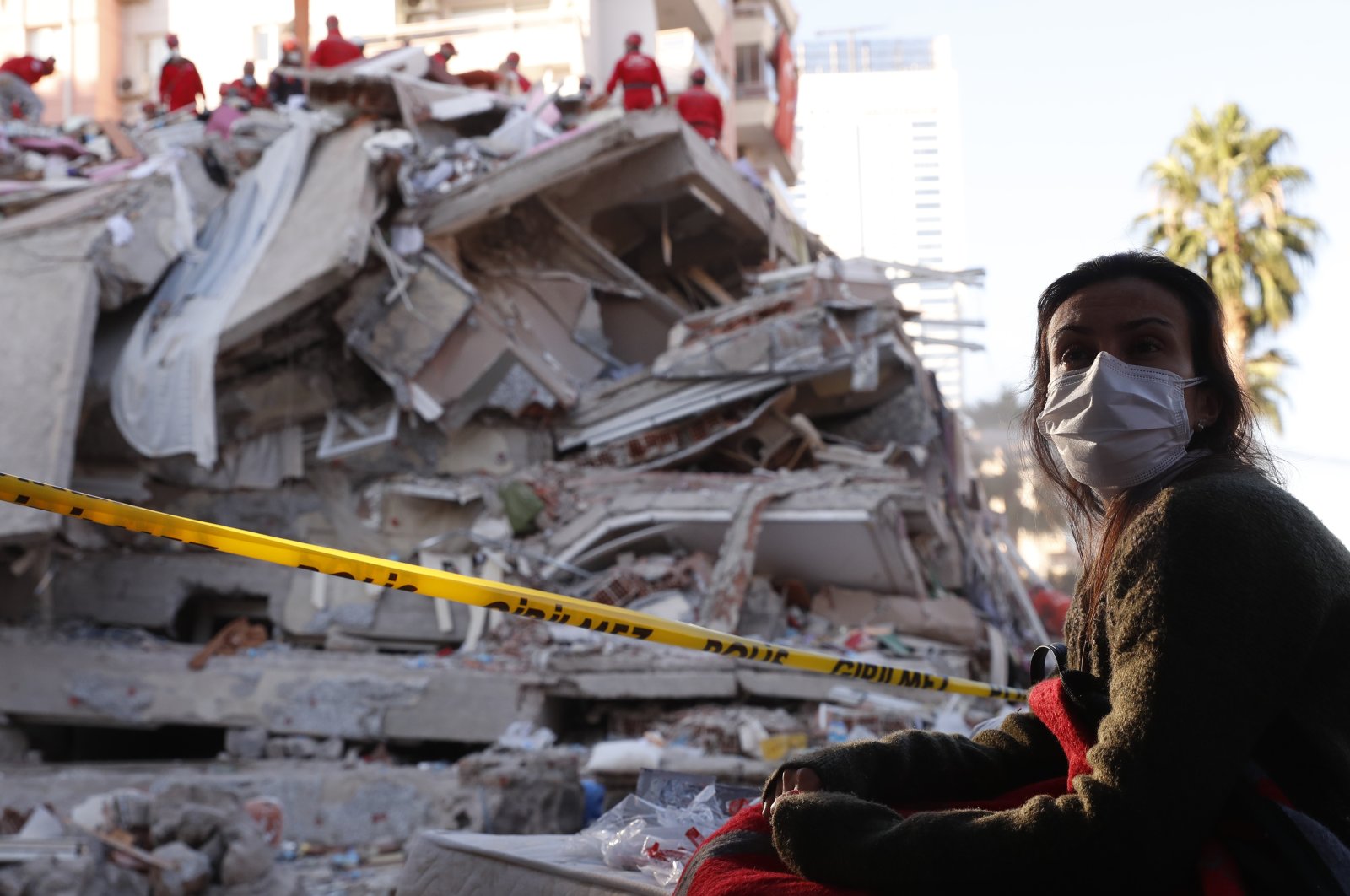 As Izmir continued to reel from the devastating 6.6-magnitude earthquake, rescue teams offered hope for the city as they continued to pull survivors from debris on the third day following the disaster

The death toll from the 6.6-magnitude earthquake that hit Turkey's third-largest city Izmir increased to 79 on Monday, with rescuers racing the clock to save people trapped under collapsed buildings throughout the weekend.

The Friday afternoon quake that struck Turkey's Aegean coast and north of the Greek island of Samos toppled buildings in Izmir and caused varying degrees of damage to hundreds of others, including ones in neighboring provinces.

In an earthquake-prone country where everyone expects "the big one" and people sleep with "earthquake bags" filled with water and snacks under their bed, the response was quick. Within minutes, search and rescue teams from the Disaster and Emergency Management Authority (AFAD) were dispatched to the scene.

They were later on joined by teams from the nongovernmental organization (NGO) Search and Rescue Association (AKUT), while the Turkish Red Crescent (Kızılay) tended the injured. As the night settled, the entirety of the Turkish government was mobilized with its institutions and ministers, as many of them arrived in Izmir to personally oversee the operations.

According to Environment and Urbanization Minister Murat Kurum, around 5,000 rescue personnel, 20 sniffer dogs and 751 vehicles were dispatched to the city as of early Saturday.

After the initial shock was over and the dust had settled, those who had relatives missing started their agonizing wait as rescue teams had already begun excruciating search and rescue efforts, while millions watched the around-the-clock live broadcasts.

Many people spent the night out in the streets, too frightened to return to their homes, even if they sustained no damage. The authorities warned residents in Izmir not to return to damaged buildings, saying they could collapse in strong aftershocks.

In small green spaces close to the damaged buildings, tents went up for frightened families to spend the night.

Authorities registered more than 800 aftershocks since Friday, dozens of them stronger than a 4.0 magnitude quake, complicating the search for those believed to still be breathing under mountains of concrete debris.

In Bayraklı, one of the worst-hit districts of Izmir, families and friends looked on in agony, exhaustion and hope as workers painstakingly lifted slabs of flattened apartment blocks.

Perhaps the most heart-wrenching moments came from a collapsed apartment in Bayraklı, where rescuers pulled out several survivors after countless hours.

Buse Hasyılmaz was visiting a dentist when the earthquake struck and collapsed the building she was in. She was found by rescue teams after she managed to call her relatives and alert them.

As rescuers tried to reach the 29-year-old buried under concrete slabs, Agriculture and Forestry Minister Bekir Pakdemirli, who arrived in Izmir earlier, called Hasyılmaz to encourage her to hold on.

In her call with Pakdemirli, Hasyılmaz asked the minister to "unleash the dogs" and that said she would "make cat noises" to help K-9 units locate her.

The minister played along, told the shocked young woman to make cat noises and that she would be rescued soon. Nearly 10 hours after the disaster struck, rescue teams managed to open a tunnel to where Hasyılmaz was located and pulled her through.

Her mother, however, was not among the lucky as teams found her lifeless body under the rubble.

Inside the same devastated eight-floor apartment building was Inci Okan and her dog Fıstık, or Pistachio.

A video showed a female rescuer trying to calm down the 16-year-old girl under the debris as she inserted a catheter. "I'm so scared," the girl cried. "Can you hold my hand?"

"We are going to get out of here soon," the rescuer, Edanur Doğan, said. "Your mother is waiting outside for you."

Several hours after Hasyılmaz, Okan and her dog were pulled from the building.

With every hour passing, news of a new survivor became less and less frequent.

But hope grew that more survivors could be found after a mother and her three children were rescued on Saturday afternoon, some 23 hours after disaster struck.

She was joined by a 65-year-old man, who was saved in the 26th hour and another woman pulled out on the 30th.

The latest survivor was a 70-year-old man who was rescued some 33 hours into the disaster. His condition was reported as stable by the health minister.

As of Sunday evening, authorities said more than 100 people had been rescued from under the debris, while efforts were still ongoing in eight collapsed buildings.

The quake occurred as Turkey, like the rest of the world, was already struggling with the resurging coronavirus pandemic.

And with residents spending nights in tents and temporary shelters, fears grew over a potential increase in infections across the disaster-hit city.

In a respectful but firm tone, the health minister said while it was understandable that practicing social distancing was near-impossible in crowded tents or other temporary relief centers, he still warned everyone to not forget about the coronavirus threat.

"We are going through unprecedented times as we suffered a major earthquake during a pandemic," Koca said.

"We urge all our citizens to continue carrying out precautions against the coronavirus pandemic. We cannot give in to the pandemic while we deal with the aftermath of the earthquake," he said.

The Health Ministry brought in large quantities of masks and disinfectants to the city, which were distributed by the AFAD and National Medical Rescue Team (UMKE) personnel.

Arriving in Izmir on Saturday night, President Erdoğan visited scenes where rescue efforts were ongoing and thanked the teams for their efforts.

Speaking about the disaster, Erdoğan said the government had made every resource available to help Izmir, adding that reserved spaces across the city were already being allocated for reconstruction purposes.

"We will hopefully rebuild new apartments and give new homes to our citizens who lost theirs during the earthquake," Erdoğan told reporters.

The president said the government would also provide rent for families during the reconstruction process, as well as compensation for lost belongings.

"We have done this before in Elazığ and Malataya, where similar earthquakes happened. We will do the same here. Aside from that, we have container homes. We can offer families a place to live during the process," Erdoğan said and added that the families could also move into student dormitories as a temporary solution if they wish.

Speaking about the Education Ministry's move to close schools in the city for a week, Erdoğan said the decision could be extended depending on the situation.

The president said the leaders of 88 countries have contacted him to offer condolences.

"I thank each and every one of them on behalf of myself and our people."

Speaking again on Sunday, Erdoğan reiterated the government's support for the victims.

"We are determined to heal the wounds of brothers and sisters in Izmir before winter arrives," he said.

This was the second deadly earthquake so far this year in Turkey, after a 6.8-magnitude earthquake hit the eastern province of Elazığ in January, killing 41 and injuring 1,600.

As a country situated on several active fault lines, Friday's earthquake renewed fears over when Istanbul might be hit by a big tremor after the devastating 7.4-magnitude one in 1999 in Gölcük that killed more than 17,000.

Despite being located among the world's most seismically active zones and suffering several major earthquakes in the past, the Gölcük disaster left everlasting scars in Turkey's memory and led to some major changes in both regulations and people's awareness of the issue.

Over the past two decades, however, studies have shown that the city will inevitably suffer from one with great force, probably greater than the one in 1999, and experts warn that it is not a question of "if" but "when."

Earlier this year, a study commissioned by Istanbul Metropolitan Municipality revealed that in case of a 7.5 magnitude earthquake, tens of thousands of buildings across the city would suffer critical structural damage, especially in the city's European side.

According to an expert at Gazi University's Earthquake Engineering Research Center, however, the Izmir earthquake should not be seen as an indicator for Istanbul.

"We also need to show the excellence we have shown in responding to the earthquakes in reducing risks."