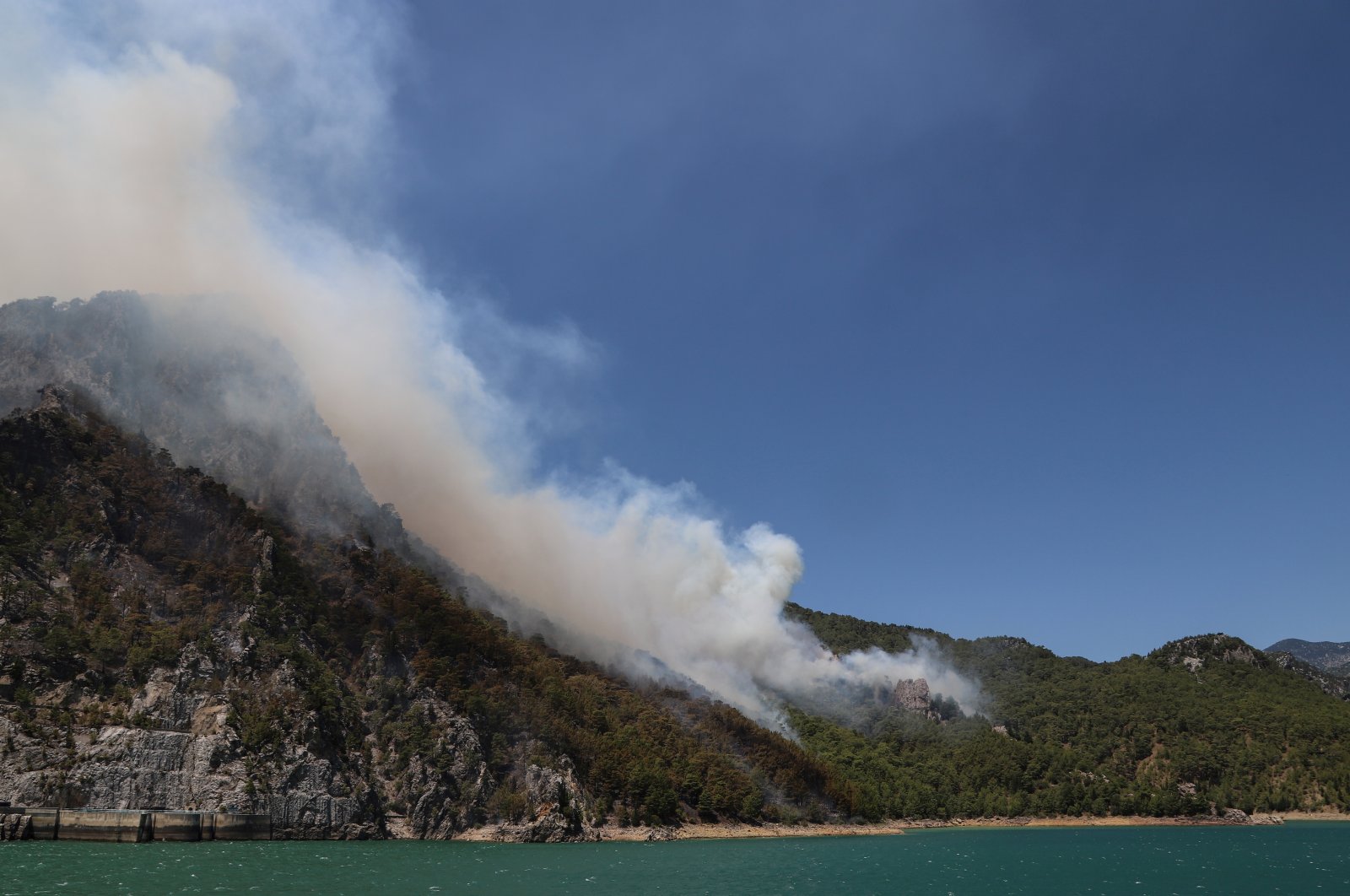 Turkish people on social media were quick to put the blame on the PKK terrorist group-linked "Children of Fire Initiative" late Thursday for a series of fires that have hit Turkey recently, as PKK sympathizers also hailed the fires on Twitter.

The PKK has a long history of burning Turkey's forests as a method of "vengeance" from the Turkish state and causing civilian deaths and environmental destruction in the process.

Forest fires spread to a vast area in southern Turkish provinces earlier on the same day, from the summer getaway of Antalya to Adana and Mersin. Fires started Wednesday, threatening residential areas.

Their almost consecutive nature triggered concerns that they might be the result of a string of arson attacks, which Turkish netizens blamed the PKK for. The so-called "initiative" has yet to claim responsibility for the fires, but their past makes them the prime suspect in the incidents. One of the PKK’s highest-ranking members, Murat Karayılan, also previously hailed the method of using arson in terrorist attacks in a statement.

“Two or three youths may well gather and do something. They may say ‘we don’t have a weapon’ but their weapons are lighters and matches,” he said.

Şemdin Sakık, another high-ranking PKK terrorist, also previously said that the terrorist group would resort to similar actions if need be. “If we run out of weapons, we will go to Bodrum and burn their yachts, go to Antalya to burn their greenhouses, go to Istanbul to burn their cars and go to Izmir to burn their forests,” he said.

The worst fire was in Manavgat, a town in Antalya province that is popular among holidaymakers. It erupted on Wednesday noon in four different spots of the town surrounded by forests. It did not reach the town center but affected the villages near it. Eighteen villages and neighborhoods were evacuated, while authorities announced that 62 people were hospitalized for burns and smoke inhalation. Three people were killed in the fire and the Disaster and Emergency Management Authority (AFAD) announced Thursday that 122 people were "affected" by the fire while 58 were still hospitalized.

Elsewhere, a forest fire broke out in the Kozan district of Adana Wednesday evening and again, strong winds fanned the flames. Firefighters battled the flames until the early hours of Thursday, while seven villages near the fire's epicenter in a rural part of the district were evacuated.

Cumali Yücel, a local, told DHA that “a small fire” on the banks of a dam reservoir got out of control quickly and reached their neighborhood. Yücel, who lost his house to the fire, said security forces took them to safety. In Mersin, Aydıncık and Bozyazı towns were gripped with forest fires Wednesday. Wildfires that had started in pine forests continued into Thursday. Another fire broke out in Silifke district in the early hours of Thursday, leading to a brief closure of a road connecting Mersin to Antalya.

Also in Adana, a fire broke out in a forest in the Aladağ district and led to evacuations, while 10 people trapped in a burning area were rescued. Three neighborhoods in areas near the fire were evacuated. Adana Governor Süleyman Elban told reporters that 22 forest fires broke out in Adana Wednesday and 20 of them were put out on the same day.

In Adana's neighboring Osmaniye province, firefighters were still fighting Thursday to contain flames from a forest fire that broke out near a village on Wednesday. Helicopters and planes poured water on the fire while bulldozers struggled to clear the path for firefighters trying to reach the scene by land.

Last October, four provinces around Turkey also fell victim to the PKK’s hatred of nature, with almost simultaneous fires destroying forests in various parts of the country. Turkish authorities were quick to detain suspected arsonists who burned forestland in southern Hatay province’s Belen district, and it was not long before a PKK-aligned terrorist group claimed responsibility for the attack.

The "Children of Fire Initiative" glorified the heinous attack on Turkey’s forests, praising the terrorists who initiated the fire. The so-called "initiative" was responsible for many arsons in recent years, and the group is known for its close ties to the PKK terrorist group.

The "Children of Fire" were also implicated by Turkish authorities in several earlier fires. However, the PKK is partly active in the Amanos (Nur) Mountains, stretching southward from the Taurus mountain range in Kahramanmaraş to the Osmaniye and Hatay provinces. To deny the terrorist group a safe passage route from war-torn Syria, Turkish security forces have been conducting regular operations in the region.

Meanwhile, PKK sympathizers took to social media and further manifested their hatred of forests with jokes making fun of the fire, in a collective effort of terror propaganda.

Sharing the links of PKK-linked websites Fırat News Agency (ANF) and Nuçe Ciwan’s articles that glorify the arsons, the group’s sympathizers continued to celebrate the damage dealt to the environment by the terrorists.

In 2019, the group also claimed responsibility for wildfires in Turkey's western, northwestern and southern provinces, declaring "fiery revenge" against the state.

In a written statement published on a pro-PKK website, the group took responsibly for starting 27 separate fires in western metropolitan cities between July 11 and Aug. 24, including in the western province of Izmir, which affected more than 500 hectares (1,235 acres) of forest in the Karabağlar, Menderes and Seferihisar districts.

The PKK-linked group says they have caused this environmental destruction in Turkey's western districts as a so-called act of revenge, further claiming that they will continue to set fire to other green areas and lands until a "free autonomous 'Kurdistan'" is established.

The terrorist group is also known to have claimed responsibility for various incidents unrelated to the group as acts of sabotage and attacks. In July of last year, the PKK-affiliated ANF reported that a forest fire on the outskirts of Mount Aydos in Istanbul’s Pendik district was claimed by the "People's United Revenge Militia" group, which is a part of the "Peoples' United Revolution Movement" umbrella group of several illegal extreme left-wing terrorist groups – mainly backed by the PKK. However, the Istanbul Governorate had said in a statement that the investigation into the fire revealed that two children accidentally started the fire.

Nevertheless, another fire that broke out two months later in the same area was indeed perpetrated by a PKK-aligned militant, as proven by a Turkish court.

Some 4,865 square meters (52,366 square feet) of land burned in the wildfire that started in the Aydos Forest on Sept. 19, 2019. The investigation by security forces revealed that the fire was started by Yakup Akman on behalf of the PKK terror group.

Moreover, during Turkey's Operation Olive Branch in 2018, which was aimed at clearing the Syrian border city of Afrin of the PKK's Syrian affiliate YPG, fleeing members burned down hundreds of acres of forestland on the Amanos Mountains in the adjacent southern Turkish province of Hatay. PKK terrorists also burned forests in the Dörtyol district of Hatay and the Havran district of northwestern Balıkesir province.

In another case, three terrorists were arrested after they were identified as the perpetrators of a 2011 forest fire in the Foça district of the western province of Izmir.

In August, another incident took place, this time in northern Iraq, that further proved the terrorist group’s hatred of the environment. On Aug. 10, Turkish drones captured images of PKK terrorists setting fire to forestland in northern Iraq.

The terror group uses various tools to wrongfully accuse Turkish forces of destruction in the areas it has cleared in successful counterterrorism operations, said sources, who asked not to be named due to restrictions on speaking to the media.

Formed in 1978, the PKK – recognized as a terrorist group by Turkey, the United States and European Union – has been waging violent attacks against the state and citizens since 1984, during which nearly 40,000 people have been killed. In addition to suicide bombings, deadly ambushes and massacres of civilians, the PKK either claimed or was accused of starting many forest fires in the past.