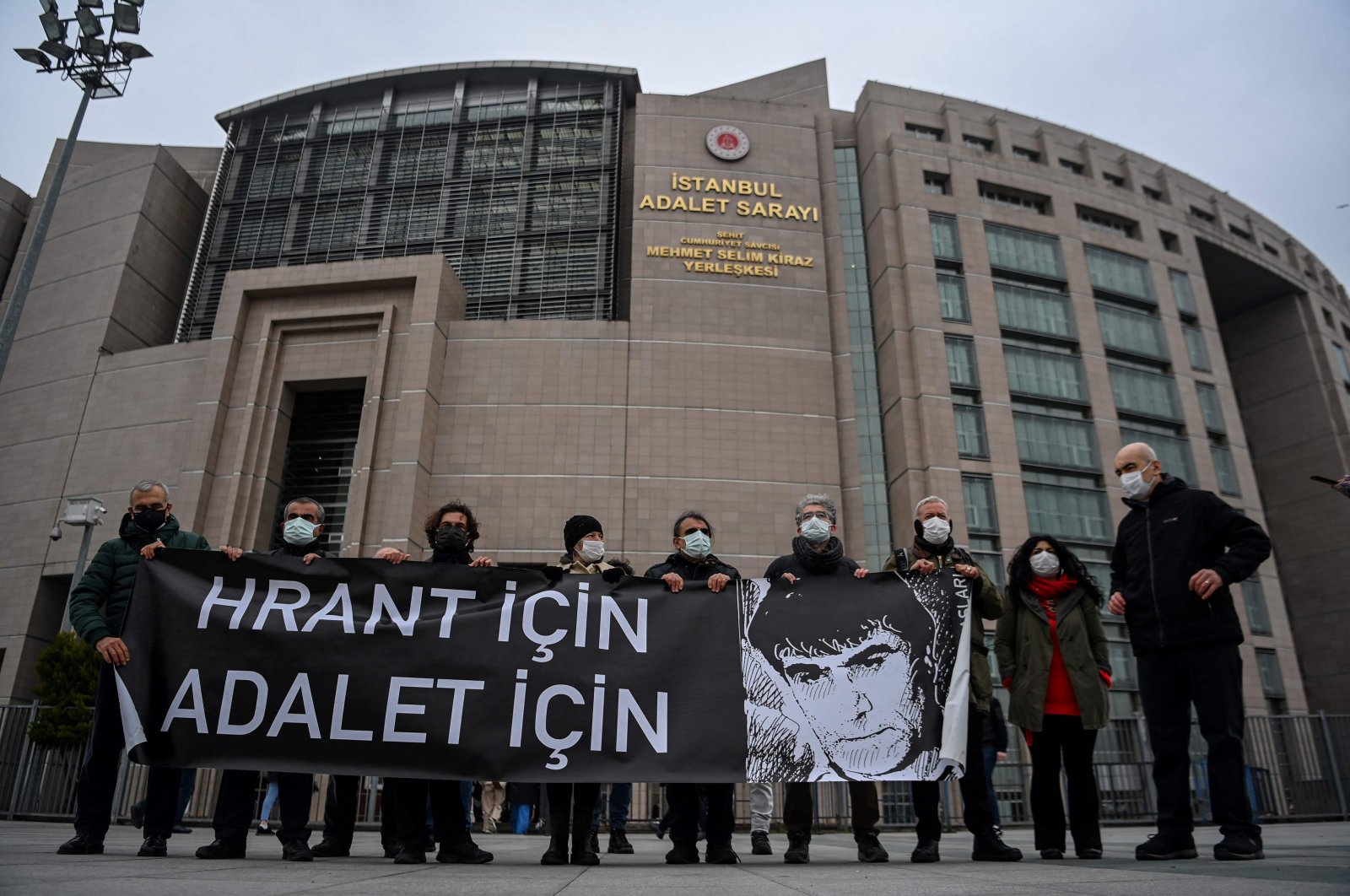 Demonstrators hold a banner reading "For Hrant, For Justice" with a drawing of Hrant Dink, outside the courthouse where the trial is being held, Istanbul, Turkey, March 26, 2021. (AFP Photo)
by DAILY SABAH Mar 26, 2021 11:40 am

Six suspects, including police chiefs linked to terrorist group FETÖ, were sentenced to life and lesser prison terms on Friday by an Istanbul court over the murder of Hrant Dink, an Armenian Turkish journalist, in a plot orchestrated and covered up by the group

An Istanbul court on Friday handed down prison terms to former police chiefs, gendarmerie officers and others linked to the Gülenist Terror Group (FETÖ) for a cover-up related to the murder of the prominent Armenian Turkish journalist Hrant Dink. A separate trial will be held for FETÖ leader Fetullah Gülen and 12 other fugitive defendants.

Ramazan Akyürek, former head of police intelligence, was sentenced to aggravated life imprisonment on murder charges and an additional sentence of five years and seven months for destroying official documents in a charge related to the cover-up of intelligence tip-offs for murder. Ali Fuat Yılmazer, another former police chief, was sentenced to aggravated life on similar charges. Both men were already serving lengthy prison terms for other FETÖ-related cases.

A total of 76 defendants were on trial, but only six were in custody while others were released earlier pending trial. The court dropped charges against Celalettin Cerrah, who was the Istanbul police chief at the time of the murder, citing the statute of limitations. Charges against Sabri Uzun, a senior police intelligence official, were also dropped for the same reason.

Muharrem Demirkale, a former military officer, was handed down two sentences of aggravated life imprisonment for “violation of Constitution” and “aiding murder.” Military officers Okan Şimşek and Veysel Şahin, as well as Ali Öz, who was the gendarmerie commander in Ogün Samast's hometown Trabzon at the time of the murder, were sentenced to 28 years on murder and forgery charges stemming from the cover-up. Ercan Gün, a journalist in the case, was sentenced to 10 years in prison for being a member of FETÖ. Two other public officials, Trabzon's former police intelligence chief Engin Dinç and Ahmet Ilhan Güler, a police intelligence official who was stationed in Istanbul at the time of the murder, were acquitted.

Dink was shot dead on Jan. 19, 2007, outside the office of Agos, the newspaper where he served as editor-in-chief, in broad daylight on a busy street in Istanbul. Seventeen-year-old Ogün Samast was the sole gunman in the case and was sentenced to 22 years in prison as he was underage at the time of the murder. He was captured en route to his hometown in northern Turkey and two more suspects with ultranationalist motives were accused of helping him and motivating him to kill Dink.

Dink’s murder sparked public outrage in Turkey, with days of protests and solidarity rallies with the Armenian community. The journalist was known for his outspoken editorials that tried to end the outright hostile rhetoric he believed had “poisoned” relations between Turkey and Armenia and the Armenian community in Turkey. He was at the forefront of reconciliation efforts between the two communities at odds over the alleged genocide of Armenians during World War I by Ottoman forces.

The murder would have been a closed case if not for some new revelations and the insistence of Dink's family that a larger network was involved. Ultimately, former police chiefs linked to FETÖ were detained for covering up information on the murder.

The terrorist group was known for maintaining a network of infiltrators in law enforcement and the judiciary, which was largely exposed after FETÖ’s notorious coup attempt in December 2013. New investigations first discovered the connection of Ramazan Akyürek, then head of police intelligence, to the phone wiretaps of the judge who oversaw the trial into the murder. After prosecutors linked to the terrorist group were dismissed and taken off the case, a new probe was launched in 2014 into the role of public officials in the murder. Akyürek and Ali Fuat Yılmazer, another high-ranking official at the police’s intelligence department, were detained. Further arrests netted gendarmerie officials. The new indictment toward 26 defendants accused them of homicide, running a criminal organization and forging official documents related to the murder and the alleged cover-up of the murder, as well as hiding intelligence about a possible attack against Dink before his death.

Along with Gülen, prominent FETÖ names, including journalists Adem Yavuz Arslan and Ekrem Dumanlı, both believed to be in the United States, will be subject to a separate trial. Zekeriya Öz, a well-known prosecutor who was behind some of the sham trials orchestrated by the terrorist group’s infiltrators in the judiciary, will also be tried in that trial. Öz is believed to be in hiding in Europe, possibly in Germany, according to media reports.

An indictment against the defendants says that FETÖ-linked police officers deliberately hid intelligence reports about the expected murder of Dink and destroyed documents containing personal information about the gunman. Ramazan Akyürek and Ali Fuat Yılmazer were aware of the murder plot, according to the indictment, but “they waited for it to happen to serve the purposes of FETÖ, which planned to pin the blame for the murder on defendants in the Ergenekon and Balyoz (Sledgehammer) cases.” Ergenekon and Balyoz refer to a string of trials where FETÖ-linked judges, prosecutors and police officers are accused of orchestrating sham trials to imprison FETÖ’s critics. Muharrem Demirkale, who was also involved in FETÖ’s July 15, 2016 coup attempt, was among gendarmerie officers who were secretly following Samast as he traveled to Istanbul and committed murder, according to the indictment.

Hakan Bakırcıoğlu, a lawyer for Dink’s family, told reporters after the hearing that they would appeal to the verdict. “It did not rule for all the perpetrators and did not shed light on all aspects of the murder,” he said. Bakırcıoğlu said there was also no indictment against “those who carried out a lynch campaign against Dink before his murder.”

“Neither was there an indictment about other public officials who were involved in the murder or had responsibility. The trial did not shed light on who ordered the murder and how it was staged,” he said.