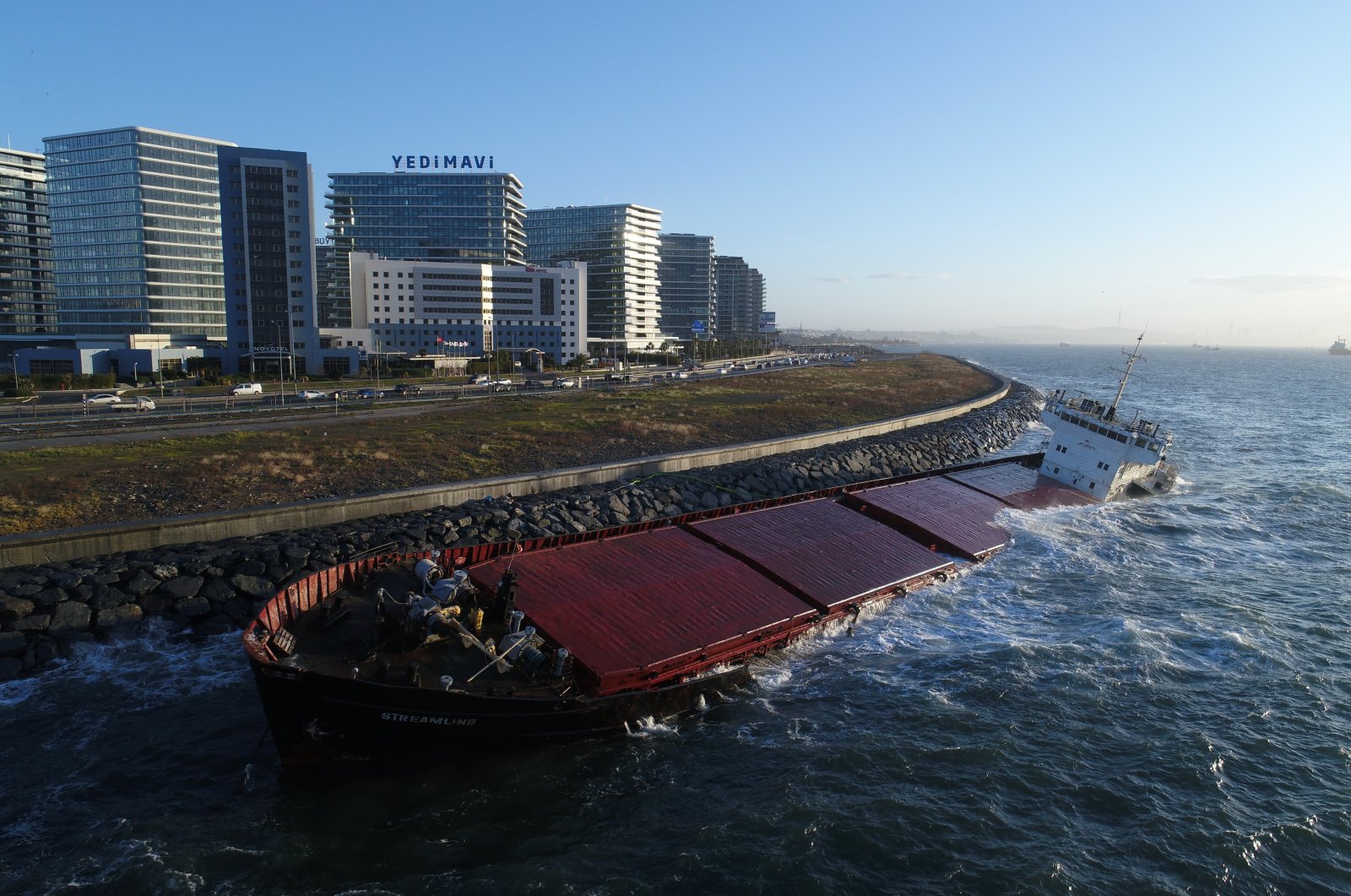 A cargo ship that ran aground on Jan. 29,2021 is seen in the aftermath of a storm, off the coast of Zeytinburnu district, Istanbul, Turkey. (IHA Photo)
by DAILY SABAH WITH AGENCIES Feb 09, 2021 12:44 pm
RECOMMENDED

The Presidency of Disaster and Emergency Management Authority (AFAD) said in a statement on Tuesday that three citizens were injured in Istanbul due to falling objects. Some 193 rooftops in 18 districts and 191 vehicles throughout the city were also damaged, the AFAD stated, adding that they are continuing to respond to calls and are assessing the destruction.

The storm began late Monday with light rain on Istanbul's European districts, including Sultangazi, Gaziosmanpaşa, Bakırköy, Bağcılar, Beyoğlu, Kağıthane, Bayrampaşa and Esenler, later increasing its effects to the Asian districts of the city.

Strong winds toppled a tree outside the Florya station but did not affect the services of the Marmaray suburban line. The tree was removed by staff at the station. In nearby Ataköy neighborhood, a tree caused damage to a parked car when it fell onto the vehicle.

A cargo ship that had run aground on Jan. 29 off the coast of Zeytinburnu district started taking on water and sliding toward the sea. Officials from the local branch of the General Directorate of Coastal Safety (KEGM) told Anadolu Agency (AA) that the ship stayed in its position and has not yet caused any pollution or fuel leaks.

Some ferry services in the city have been canceled due to strong winds, local operators said Tuesday. The Istanbul Sea Bus Company (IDO) and its local competitor BUDO of Bursa said they canceled some services, including lines between Istanbul and Bursa provinces.

The regional directorate of the Turkish State Meteorological Service (TSMS) said in a statement that strong southwesterly winds will continue for a couple of days, urging citizens to take measures and be cautious against falling objects, carbon monoxide poisoning and delayed transport services.

The 15-million megapolis is particularly vulnerable to storms and gale-force winds approaching the city from its southwest due to its 80-kilometer (near 50 mile) layout on an east-west axis on the northern shore of the Marmara Sea.

The storm also affected ferry services in the Dardanelles, with local operator GESTAŞ scrapping several trips in the strait as well as services to the Turkish islands of Gökçeada and Bozcaada in the Aegean.

Further south, the coastal towns Edremit, Ayvalık, Burhaniye and Gömeç in the western province of Balıkesir were also hit by strong winds and accompanying waves that were measured at 3 meters (almost 10 feet) in some areas, damaging fishing and leisure boats.

Similar scenes were also witnessed in the resort towns of Bodrum and Marmaris in southwestern Muğla, where trees were uprooted and rambling yachts were rescued and towed to safety.

In the western city of Izmir, winds severed pieces of concrete from the minaret of a mosque in Karabağlar, prompting police and firefighters to take measures. Waves and rising sea levels inundated several sections of the waterfront and the tram line in the Karşıyaka district, causing disruptions in services.