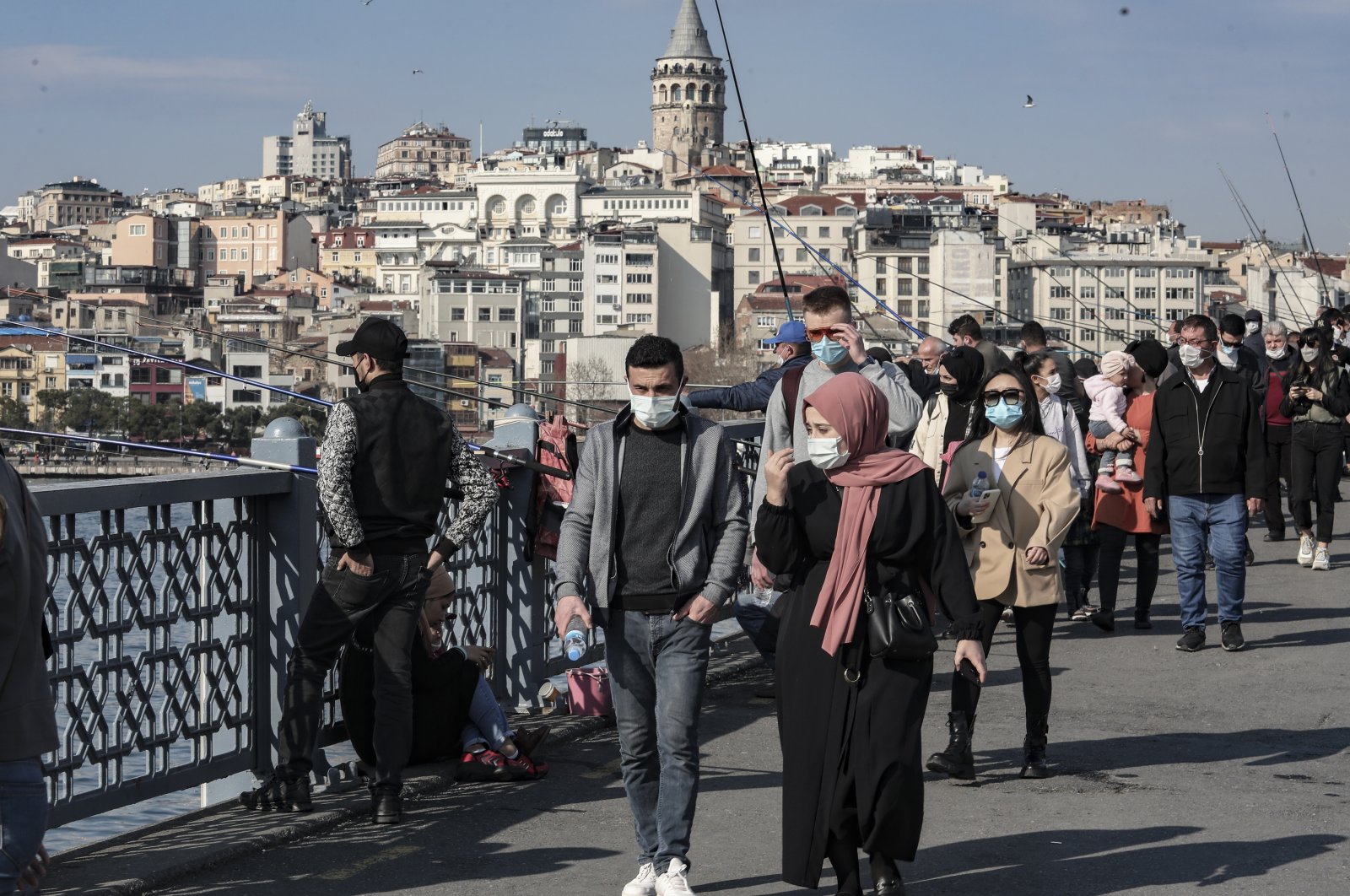 A member of the Health Ministry’s Coronavirus Scientific Advisory Board says Turkey's biggest city, where the number of weekly cases per 100,000 people has reached 178, is now in its 'third wave' of the COVID-19 outbreak and far from its 'peak'

Istanbul turned “red” this week in a color-coded map showing the level of risk from the coronavirus in 81 provinces of Turkey. With roughly 178 cases per population of 100,000 people, the country’s most crowded city of more than 15 million people is now in the “third wave” of the outbreak, Serap Şimşek Yavuz said. Yavuz, a member of the Health Ministry’s Coronavirus Scientific Advisory Board, which advises the government on measures, said the city is still far from the “peak,” a level in cases that is usually followed by a drop in cases.

Turkey dialed down restrictions for most provinces, based on the number of weekly cases, earlier this month. This new “normalization” process, however, appears to threaten the improvement in controlling the outbreak. Experts say increased social mobility with normalization that has seen partial removal of weekend lockdowns and reopening of some businesses like restaurants and cafes might have contributed to a rise in the cases. The number of daily cases exceeded 20,000 on Thursday, while daily fatalities surpassed 80 for the first time this year.

Yavuz, who also works at the infectious diseases department of the Istanbul Faculty of Medicine at Istanbul University (IÜ), told Demirören News Agency (DHA) on Friday that they have seen an upward trend in cases in Istanbul. “Positive test rates exceeded 10%. The current average number of weekly cases is already a high number. It is safe to say we are in the midst of a third wave. We see the impact of (reopening). At our hospital (at the faculty) alone, we have seen an influx of new patients this week and a positive test rate of around 12%. I believe we have difficult days ahead,” she warned.

She said the number of fatalities would be lower after vaccination but the majority of people in Istanbul have not been inoculated yet. “They are under a very high risk of infection. Therefore, we have to comply with rules, like not coming into close contact with others, avoid staying long in enclosed public spaces, always wearing protective masks and regularly ventilate enclosed spaces,” she stressed.

Professor Sait Gönen, who heads the Cerrahpaşa Faculty of Medicine in the city, says alarm bells are ringing for Istanbul and their hospital has seen a 30% rise in hospital visits due to the coronavirus, although hospital stays did not change. “People should not think that normalization means the outbreak is over,” he told DHA. “We cannot live with restrictions forever but we should not remain indoors in (public) places too long without a mask,” he warned.

Gönen noted that their hospital had 38 patients as of Thursday and six others were in intensive care. “We had 55 patients in intensive care during the peak after the second wave,” he recalled. Cerrahpaşa’s laboratory has run more than 180,000 COVID-19 tests since March 2020, when the first cases were reported in the country and 21,000 among them turned out positive.

“This corresponds to a rate of about 11% (of all tests) and in the past 45 days, this rate is around 5%,” he noted. But Gönen is less concerned about the third wave. “We now know more about the coronavirus than we knew back in March 2020. The second wave in October-November 2020 was more like a tsunami for us and we had far more patients than those in the first wave. I don’t think the third wave would be as intense as the second because we have an upper hand and that is, the inoculation of people in risk groups,” he said. He added that the weather was also getting warmer and more people would spend time outdoors, decreasing the risk which is higher indoors. “But we need to be cautious anyway. You see a significant rise in cases in European countries nowadays, despite vaccinations,” he added.

The World Health Organization (WHO) had warned in November 2020 that Europe would be hit by a third wave of the pandemic in early 2021. French Prime Minister Jean Castex announced on Tuesday that the country had entered the third wave, with the weekly average of cases exceeding the 25,000-mark.

The rest of Turkey also faces the risk of a third wave. Since the normalization process kicked off on March 1, the number of cases increased by 70%, while the number of critically ill patients has seen a 22% rise. Professor Sema Turan, another member of Coronavirus Scientific Advisory Board, told the newspaper Sabah on Friday that it could take another 15 days before Turkey reaches a “new peak.” Like other experts, she says that preventing this is possible by full compliance with the rules.