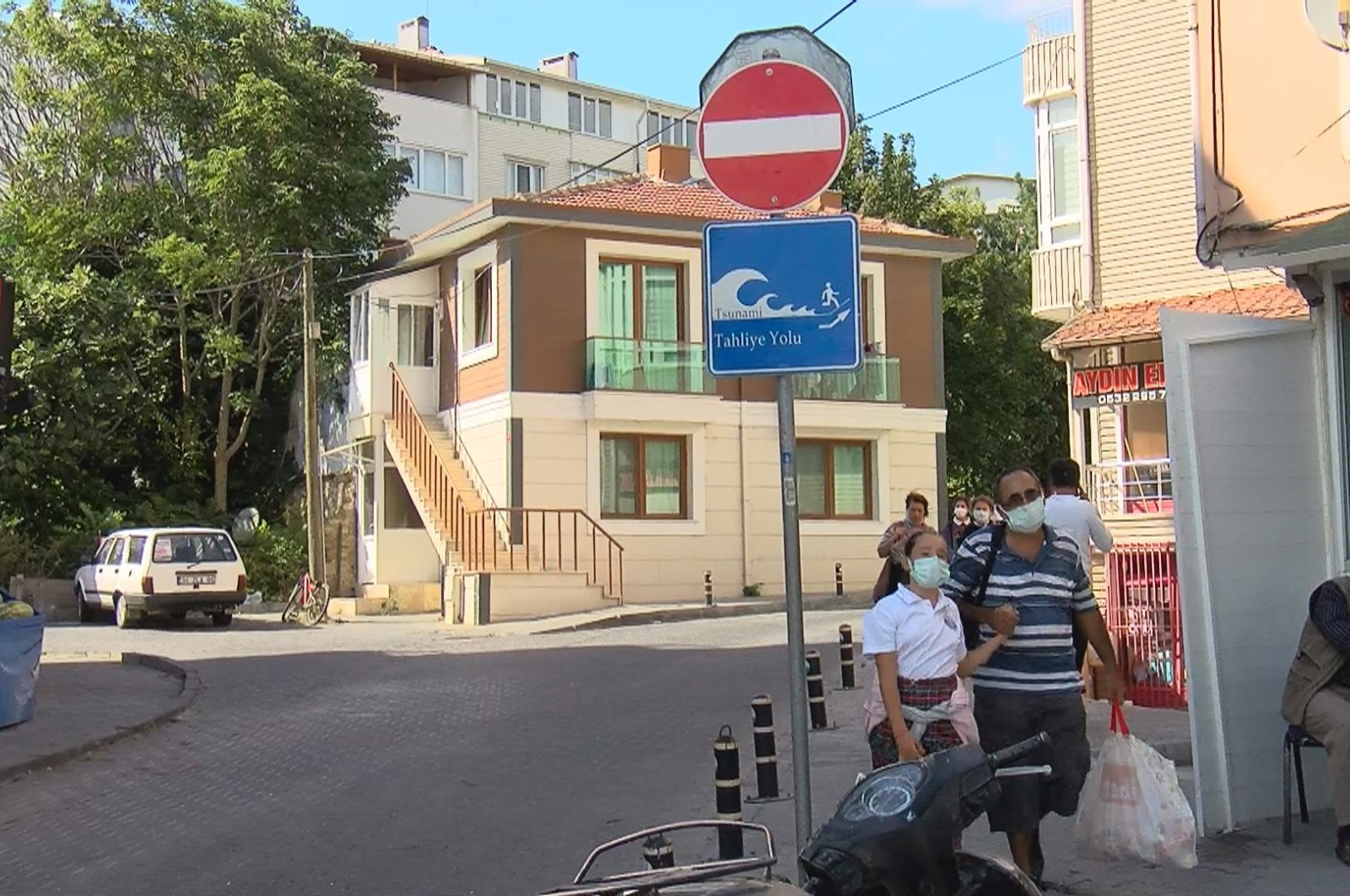 The Istanbul Metropolitan Municipality (IBB) started installing road signs directing people to evacuation areas in case of a tsunami. The signs aim to divert people to higher ground from the shores of the Marmara Sea.

Experts had earlier warned about the high possibility of a tsunami hitting the city of more than 15 million people. The first signs were placed in Büyükçekmece, a district on the European side that hosts a long coastline divided from densely populated areas separated from the sea by only beaches and a long promenade. An early tsunami warning system was also recently installed in the district.

Professor Şükrü Ersoy, an earthquake and tsunami expert from Yıldız Technical University (YTÜ), says Büyükçekmece, along with Küçükçekmece, Bakırköy, Ataköy, Zeytinburnu and Topkapı could be severely damaged by a tsunami. “The Marmara (Sea) is landlocked, but tsunami risk is there. It happened in the past and it still has potential. The sea has fault lines and any major earthquake can trigger a tsunami,” he said, noting that more than 30 tsunamis have been recorded in the Marmara in the past 2,000 years.

“It won’t be as bad as tsunamis in the Pacific but still, tsunami waves can reach a few meters high,” Ersoy told Demirören News Agency (DHA) on Thursday. He warned that even at such heights, a tsunami wave hitting some 50 meters (164 feet) inland can pull people and vehicles into the sea. “The first wave in a tsunami is usually ‘kind’ and not devastating but the following waves can be worse. Both during the tsunami and after the waves recede, devastating damage can be seen. We need to know how to act in case of such a disaster,” he said. Ersoy highlighted the need to assess potential damage to buildings located along the coast and building permits should be required to show their resilience to tsunamis.

Waves would take five to 30 minutes to reach the shore, according to Ersoy. “Even if it happens in a narrow stretch of land, it would still be devastating,” he said. Ersoy hailed the erection of signs as a step in the right direction, saying people may be confused and panicked on which direction to head in case of a tsunami.

A recent report presented to the Turkish Parliament called attention to the lingering threat of tsunamis in the Marmara Sea, putting Turkey's big cities along its coast at risk. The report, drafted by a parliamentary subcommittee investigating earthquake risks, says it could take just 10 minutes for towering tsunami waves to reach the shores in the event of an earthquake. Turkey has experienced devastating earthquakes in the past, including a 7.4 magnitude earthquake in Gölcük in 1999 that killed more than 17,000 people in the greater region. The country is located in one of the world's most seismically active zones as it sits on several active fault lines, with the Northern Anatolia Fault, the meeting point of the Anatolian and Eurasian tectonic plates, possessing the potential to cause the most devastation. The last big earthquake took place in October 2020 when a 6.6 magnitude earthquake struck off the coast of Izmir, killing a total of 115 people. The report by the Research Committee for Measures Against Earthquakes and Minimizing Earthquake Damage details that Turkey is “open to tsunami threat” due to high seismic activity. It notes that the Mediterranean, Aegean and Marmara coasts are particularly susceptible due to the “heavy use (settlement) of the shores.” The most recent tsunamis took place in 2017 in an area between the southwestern town of Bodrum and the Greek island of Kos and in October 2020, affecting Izmir’s Seferihisar district (near the epicenter of the deadly earthquake) and the nearby Greek island of Samos to the north.

Most tsunamis were reported in the Marmara Sea, as well as off Izmir, the southern town of Iskenderun and the southwestern town of Fethiye. The Marmara Sea featured heavily in the report, which recalled that the tsunami waves exceeded 2 meters (6.6 feet) in height in 1999 when one of the deadliest earthquakes rocked the country. The 1999 tsunami impacted the Tütünçiftlik, Hereke and Değirmendere districts, all in the province of Kocaeli, where the epicenter of the disaster was located.

The Istanbul-based Kandilli Observatory and Earthquake Research Institute, the country’s leading earthquake observation center, is working to establish a tsunami early warning system. The institute monitors around the clock all earthquakes of a magnitude of 5.5 or higher that have the potential to create tsunamis.

The report also lists a number of tsunami precautions. “All relevant agencies, primarily the Disaster and Emergency Management Presidency (AFAD), should draft emergency evacuation and action plans for coastal settlements after determining dangers and risks and susceptibility to the damage,” the report urges. The report calls for the installation of seismometers on the seabed, the drafting of tsunami danger maps for the Marmara Sea and establishing or increasing the number of early warning systems in the Marmara, Aegean and Mediterranean seas. Lastly, it recommends applying special measures to minimize tsunami damage to structures on the coasts.