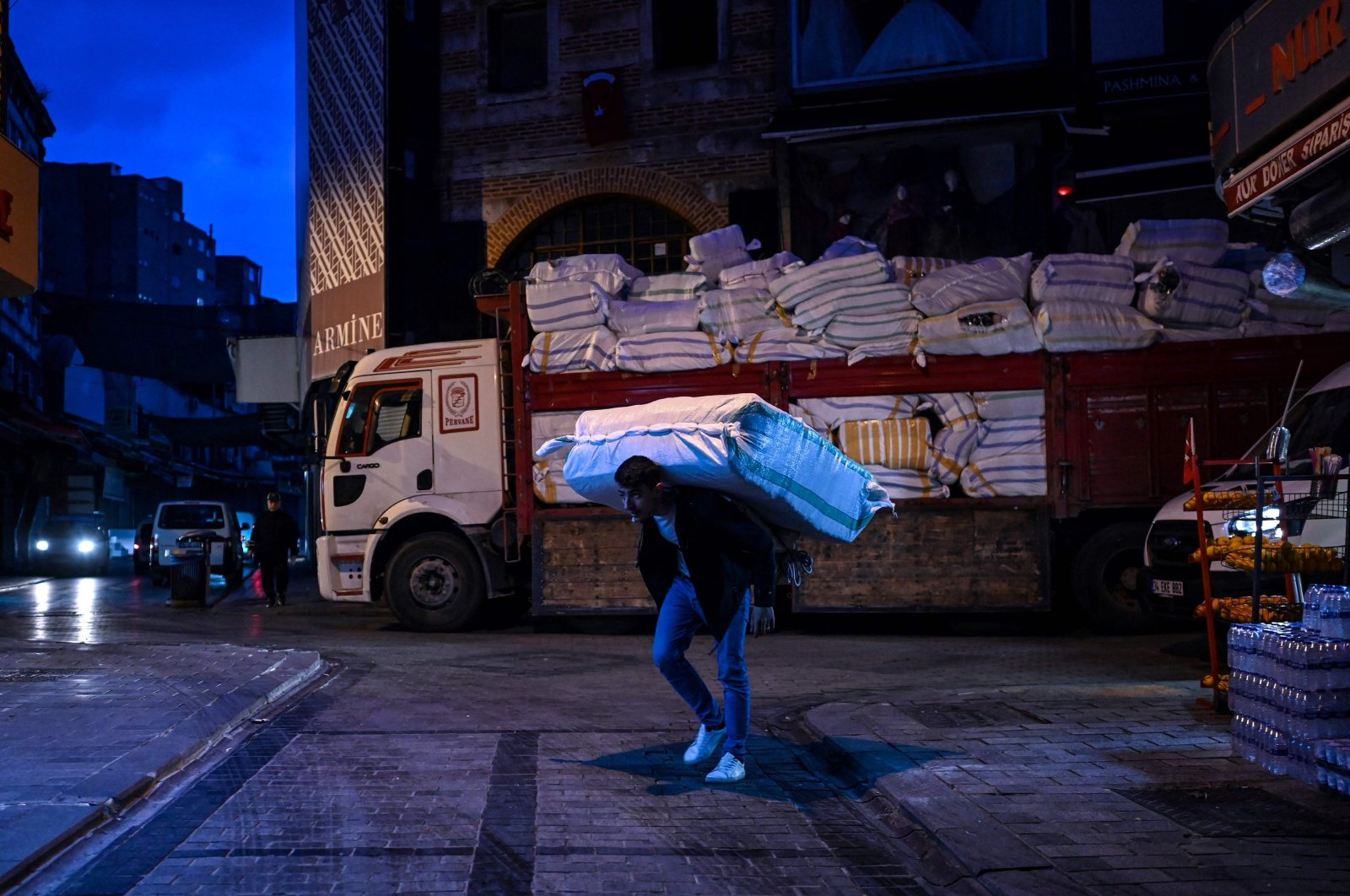 Just blocks from Istanbul's Grand Bazaar, porter Bayram Yıldız waits his turn in a dark alley to heave a huge bale on his back nearly double his body weight.

A few others linger beside him, picking up textiles from a lorry and lugging them to local shops before sunrise, their heads bowed and their knees bent.

"I am half Hercules and half Rambo," the muscle-bound 40-year-old joked, claiming he can carry up to 200 kilograms (440 pounds) at a time.

Yıldız is one of hundreds of men who gather before dawn in the ancient heart of Turkey's commercial capital, extending a tradition stretching back to Ottoman times.

Loaded with clothes and fabrics, they move in slow motion across deserted streets before the city wakes, carrying its trade on their backs, some grumbling about their luck.

"It is the worst job, but there is nothing else to do," said fellow porter Osman, who has been doing this backbreaking work for 35 years.

Urban historian Necdet Sakaoğlu dates the zenith of Istanbul's porter tradition to the early 1800s, when Sultan Mahmud II ruled what was still known as Constantinople.

Most of the porters (called "hamal" in Turkish) were then Armenian, reflecting the throbbing metropolis's multicultural history.

Today, the trade is mainly held by Kurds from the ethnically diverse provinces of Malatya and Adıyaman in the southeast, where generations of families have cultivated relationships with the Istanbul merchants.

"These porters were able to develop trust (with the business owners) before there were cell phones," Sakaoğlu said.

The porters usually work in squads, under the leadership of a captain who is responsible for coordinating jobs with merchants and distributing pay at the end of shifts.

But the job requires a strict code of conduct, with each squad controlling a particular micro-district and unable to cross into another's territory.

"If I try going over there, they won't let me – it's their territory," said porter Mehmet Toktaş, 49, pointing to buildings on the opposite side of the street.

For nearly 30 years, six days a week, Toktaş has been carrying loads up the stairs of the same seven-story building, developing the physique of a wrestler but earning less and less with time.

More than a hundred merchants in the building rely on men like Toktaş – ordinary carts on wheels are of little use in old dwellings without elevators and only narrow hallways.

But standing under a pale neon light on the ground floor, Toktaş feels like one of the last survivors of a vanishing trade, abandoned by merchants who move to more easily accessible locations and friends who opt for less grueling work.

"There were once four or five of us here, but the older ones have left and now I am alone. At the time, it paid well," he said.

"Now, the amount of work has fallen and we do not earn as much."

Toktaş says he still earns up to $20 a day, but can hardly afford to take any time off if he wants to make the official minimum wage, which is now worth about $350 a month.

In addition, he has no health plan or social security, meaning that he has to take extra care to make sure his back holds out until his planned retirement at the age of 60.

"Everyone who is older than me has had their knees or backs operated on," said Toktaş.

Around the neighborhood, some of the porters look like old men, their hair silver and their legs as thin as stilts.

Still, despite the damaged cartilage and occasional hernias, some of the porters work until they are 70.

For the old city's traders, these men are a blessing.

"They are the link we cannot give up," said trader Kamil Beldek, standing behind the counter of his tiny shop.

"To us, what they do seems very difficult, but for them it is easy."

Toktaş is less certain. Although he feels useful and needed, he doubts that many others will follow in his steps.

The upper floors of his building are now empty, with wholesalers preferring to move out to more remote locations where logistics are easier to arrange.