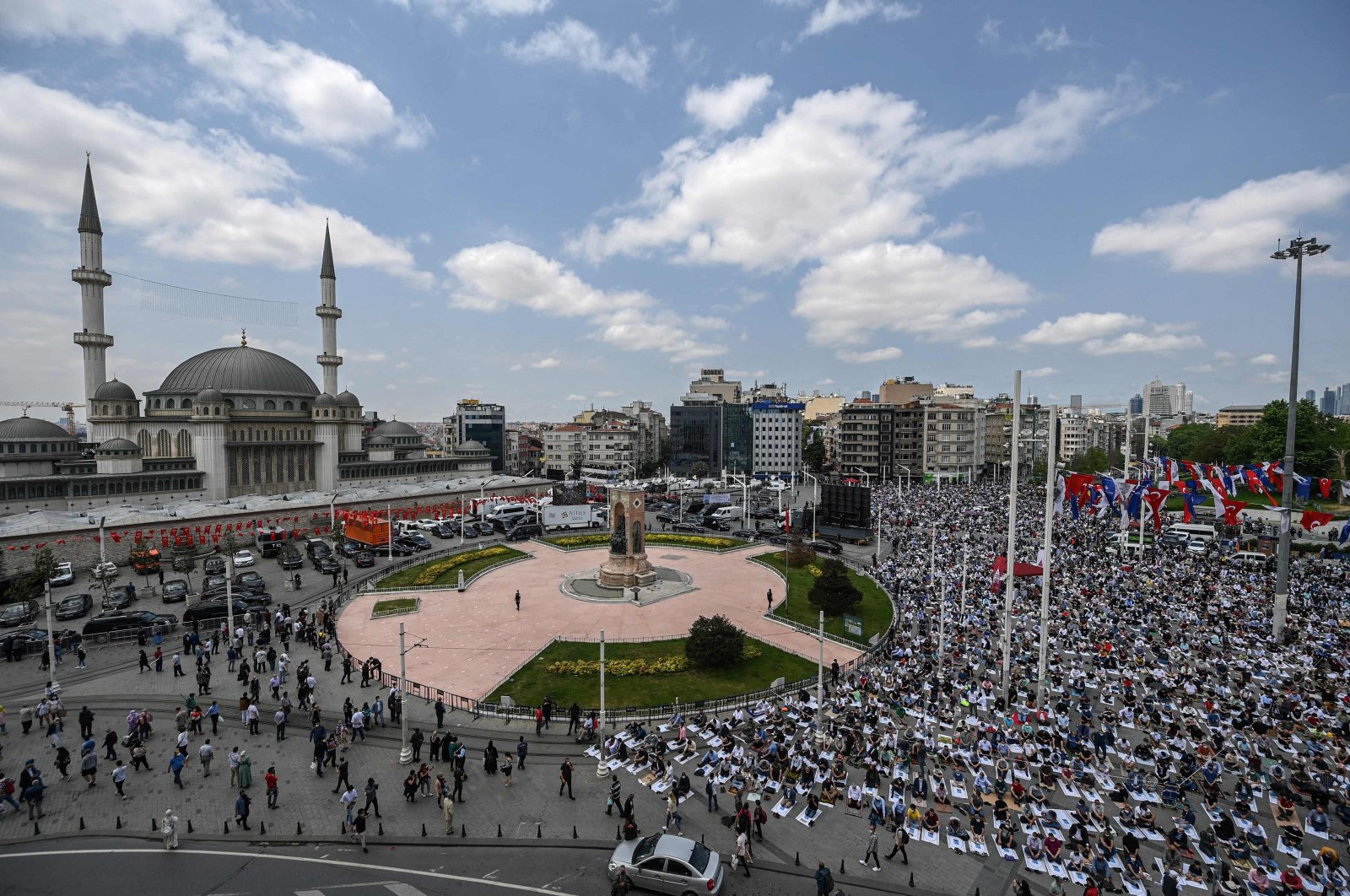 Taksim Mosque in Istanbul’s eponymous square was opened on Friday by President Recep Tayyip Erdoğan, marking an end to countless efforts and legal challenges to build it in the secular but Muslim-majority country.

The mosque, whose construction began in 2017, is the first of its kind in Taksim Square, which is located in a district dotted with churches. Its size dwarfs nearby, small Ottoman-era mosques and it has a capacity that allows 4,000 people to perform prayers at the same time.

Situated on one corner of the square visited by millions and a gateway to renowned Istiklal Avenue, the mosque is located across from the Atatürk Cultural Center, a new venue under construction that will have an opera house and other cultural venues. To its west lies Gezi Park, which was at the center of notorious riots back in 2013.

Speaking at the inauguration ceremony, Erdoğan summed up the list of efforts to construct the mosque and lamented "this place suffered too much."

“I grew up in Kasımpaşa (district) and remember the times when Muslims were forced to perform prayers, on newspapers, on a small space. We now wish that this new mosque will be filled with the faithful and sound of adhan (call to prayer) will be heard forever,” he said.

The president added that the mosque, with its digital library, reading spaces, exhibition halls, would also be an important culture and arts center for Istanbul.

“I view Taksim Mosque as a place greeting Hagia Sofia Grand Mosque and a gift for 568th anniversary of the conquest of Istanbul we will observe tomorrow,” he said. He stated that the mosque was a dream pursued for more than one century. "Have no doubt that this sound (of adhan) disturbs those who plot against our country. Taksim Mosque is one of the signs of the birth of a great and strong Turkey which gives hopes to its friends and brothers," he also said.

The mosque was built with a “top-down” architecture system, described as the only mosque in Turkey built with this technique. Thus, no deep ground excavation was required and the area around the mosque was preserved. The place fuses traditional mosque architecture with modern touches inspired by architectural features of 19th-century buildings in the Beyoğlu district. The mosque also hosts a cultural center where exhibitions will be held. A 2,950-square-meter (31,753-square-foot) area is open for worship. The mosque, built on an area of about 16,000 square meters, also houses a 163-car parking lot.

Designed by two Turkish architects in the art deco style, the triple-story mosque was financed by three brothers who own a prominent construction company.

Titanium-zinc alloy domes top the mosque whose exterior was built with choice marbles brought in from Bursa and Antalya. Two 64-meter-long minarets accompany the domes. The interior features works of calligraphist Davut Bektaş and miniaturist Adem Turan. Buff-colored carpets specially woven in western Manisa province have been installed in the mosque. An 8.5 meter-high (nearly 28-foot) mihrab (prayer niche showing the direction of Kaaba) was built, while 60 luminous chandeliers – 12 meters in diameter (over 39 feet) and 20 meters (over 65 feet) in length – are also installed in the mosque. The structure and its perimeter were sprayed with 25 tons of rosewater on Friday brought in from the country’s rose hub Isparta, to carry out a tradition dating back to the Ottoman era for new mosques.

Building a mosque may seem like an easy task in Turkey, a country, though secular, home to a Muslim-majority population. But Taksim Mosque, originally planned to be constructed in the 1950s, hit snags over the years, from lack of funding to opposition by authorities. Erdoğan himself was a member of a foundation set up in the 1990s to build the mosque and during his tenure as Istanbul’s mayor in that decade, he had voiced his desire to build it.

For some historians, plans to build a mosque in Taksim date back to the early 20th century, in response to a splendid Orthodox church built in the district, which was largely inhabited by non-Muslims during Ottoman times. Renowned poet Nazım Hikmet was among those lamenting “solitude” of Ağa Camii in Taksim, “in this faithless quarters,” in a poem he penned in 1921, while Istanbul was under the occupation of Allied forces after World War I.

It was deemed "unnecessary" by past governments, and any attempt to build it had faced fierce opposition from the secular elite that argued it was an act of "Islamization," despite high demand from practicing Muslims.

The first step was taken in 1952 by an association headed by Feridun Nafiz Uzluk, a descendant of famed Sufi philosopher Mevlana Jalaladdin Rumi. However, the association’s efforts did not come to fruition. In 1960, a group of businesspeople tried to revive the project while then-Prime Minister Süleyman Demirel ordered the sale of a plot belonging to the Treasury and a state-owned bank to the Directorate of Foundations, with the purpose of mosque construction in 1965. Yet, Istanbul's mayor from Demirel’s political rival Republican People’s Party (CHP) took the matter to the court and the court blocked the allocation of land for the mosque. In 1979, Demirel tried to pave the way for the mosque’s construction again, this time with a Cabinet decree. Yet, a military coup in 1980 thwarted the plans again. A lawmaker, the father of the Elmas brothers who took up the construction work in 2017, sought financing construction of the mosque in 1983, at a time when Motherland Party (ANAP) came to power after the junta rule. But a top court dealt a blow to plans by ruling that the mosque was not “appropriate for public benefit and city planning principles.”

In 1991, a group of businesspeople and dignitaries founded the Taksim Mosque Culture and Arts Foundation for the establishment of the mosque. Among them were members of Koç and Sabancı, two most prominent business dynasties of Turkey, a professor, a former head of Presidency of Religious Affairs (DİB), academics, journalists, writers and Erdoğan, who was then an active member of Welfare Party (RP) and a lawmaker candidate. The foundation sought a change in zoning plans from the municipality but its request was long ignored.

Erdoğan was elected as Istanbul mayor in 1994, after an election campaign where he pledged to authorize the construction of the mosque. “We will have President Süleyman Demirel inaugurate it,” Erdoğan then said. Then-Prime Minister Necmettin Erbakan also sought the construction but again, it hit political and bureaucratic hurdles. Three years later, Erbakan handed in his resignation for his post soon after a 1997 coup, which was a culmination of a lengthy campaign against the “Islamist” government and its supporters who have been subjected to a witch hunt by the secular elite. Erdoğan renewed his pledge for the mosque in 2013 while he was prime minister, along with a rebuilding of a historic Ottoman barracks at nearby Gezi Park. But protests over reconstruction plans hijacked by terrorist groups and escalated into riots delayed the plans again. The president had renewed his pledge in a speech two days after a coup attempt in 2016, and Altan Elmas had asked the president to allow him to build the mosque.

The mosque was approved in January 2017 by the Board of Preservation of Cultural Monuments, which oversees construction on preserved, historic sites, thus clearing the final hurdle for the construction of the mosque.