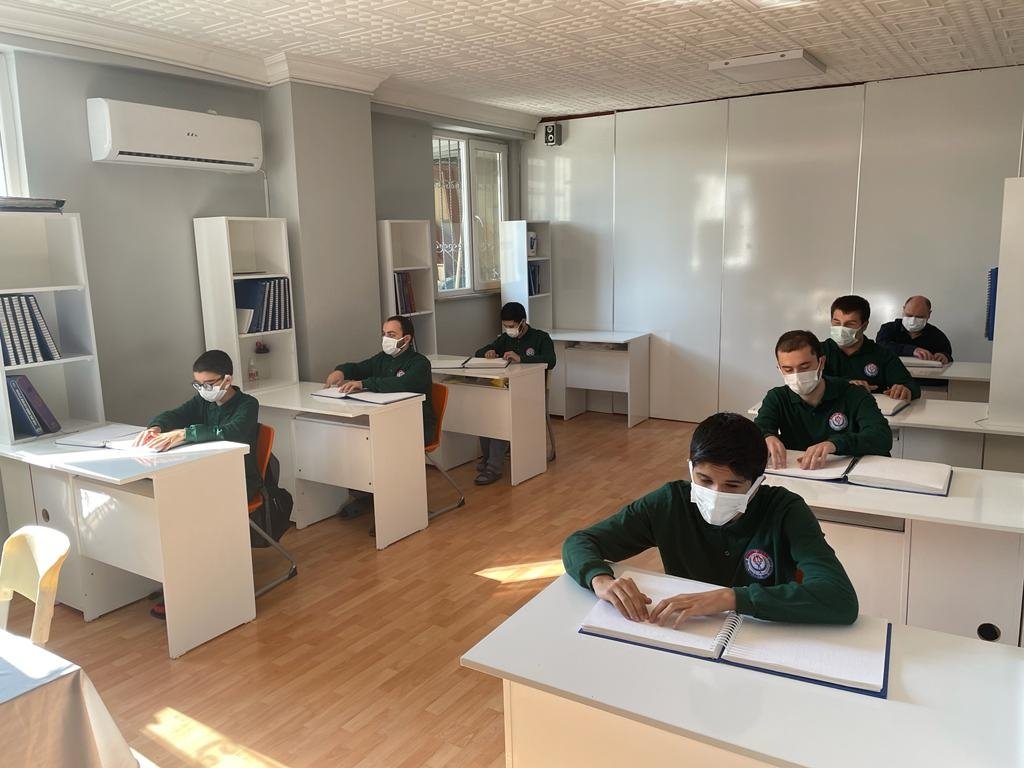 The Çamlıkaltı Quran School for Boys in Istanbul’s Küçükçekmece district is one of a kind in Turkey and among the few in the world to have a curriculum entirely based on braille. Visually-impaired youth from around Turkey and other countries flock to the school to learn all about Islam’s holy book.

The school, opened in 2012, was converted into a place exclusively for the visually impaired and staffed with teachers who also suffer from vision loss. Students follow a curriculum that also includes Turkish and Arabic language lessons before taking up the intense program of learning the Quran.

It has a capacity of 100 students but is currently serving only eight students. It has a dormitory, an audio and braille library for students.

Ali Duman, a Quran teacher at the school, says they did not have any Turkish students last year as coronavirus restrictions shut down in-person education but instead, they had two Sudanese graduates. This year, the number increased to eight. Some have basic knowledge of the holy book while others are not familiar with it at all.

“We first teach them Turkish in braille if they do not know it and then, teach them Arabic alphabet. It takes a year before they are ready to learn memorizing the Quran. Quran classes are provided in hybrid classes where they study with students who are not visually impaired,” he says.

Those who do not prefer “hafız” education, which involves memorizing the Quran, are offered Arabic lessons instead. Duman, who was born visually impaired, prides in educating “valuable students.”

“I did not have a chance to learn my profession with visually impaired teachers and this has been a challenge for me. But I am able to impart everything in a proper way as I am capable of teaching Quran in braille. I feel blessed by Allah for being able to teach Quran to these people,” he says.

Eray Öğün, a 17-year-old student, hails from the western province of Manisa and came to the city to learn the Quran. “I thought I would never be able to learn Quran because I was blind before I discovered this school. This place motivated me and I am happy to be here. Teachers are very supportive,” he says. Öğün says he wants to be a teacher like Ali Duman once he graduates. He said the school also provided him a chance to socialize, something visually-impaired people also need.

More than 100 students have graduated from the school so far after learning Arabic and taking Islamic classes while 11 visually-impaired students have become “hafız.”

Selahattin Yerlikaya, the administrator of the school, says they also run a printing press for Quran in braille and deliver them to other countries.