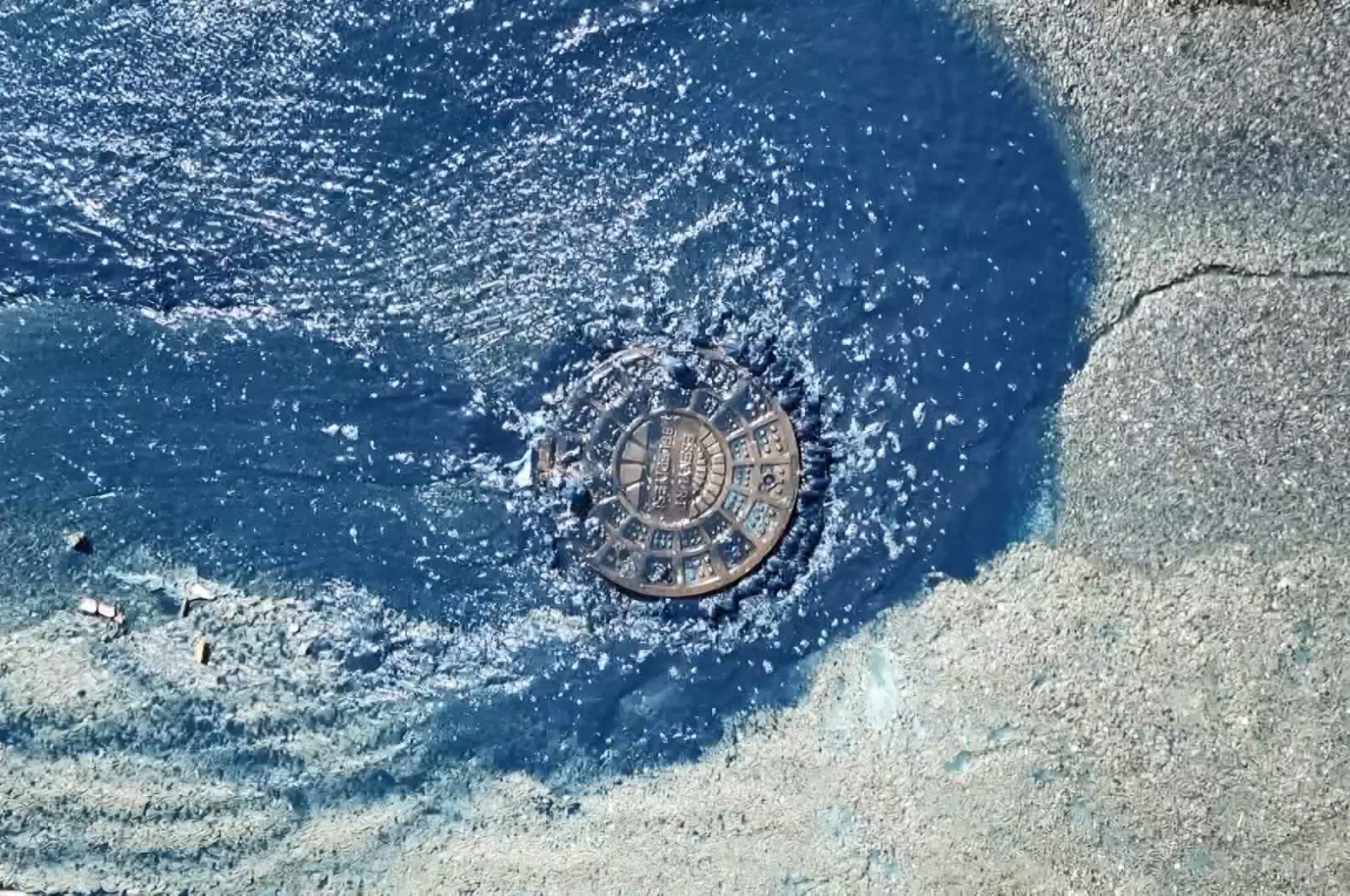 The stream flowing in different colors every day in the Esenyurt district of Istanbul is seen gushing from a manhole, Esenyurt, Istanbul, Turkey, April 14, 2021. (DHA Photo)
by Daily Sabah with DHA May 05, 2021 12:15 pm
RECOMMENDED

The confusing case of a stream in Istanbul's Esenyurt district that flows a different color every day has been resolved. A textile washing facility has been held responsible for the changing colors, Turkish officials said Wednesday. The owner of the facility has denied the accusations claiming that he is "not the only reason" for the excessive pollution of the stream.

The stream that runs right through the Haramidere neighborhood of Esenyurt started flowing in different colors 17 months ago. The stream flowed blue on Tuesday, green on Wednesday, red on Thursday and black on Friday, reports said.

After an investigation initiated by the Istanbul Provincial Directorate of Environment and Urbanization and the Istanbul Water and Sewerage Administration (ISKI), it was determined that the source of the colored water was a textile washing facility located a few hundred meters from the stream. Officials stopped the operation of the facility immediately after.

However, the business has contested the decision by applying to court. The business owner Ayhan Alan told Demirören News Agency (DHA) that their facility has a treatment plant and has nothing to do with the colored water in the stream.

"The colorful flow of the stream has nothing to do with us. Research has not been done properly by the officials. There are a lot of factories here. I am not the only reason why the stream flows in a different color," he said.

The Istanbul Provincial Directorate of Environment and Urbanization, on the other hand, published a detailed statement explaining the research process. According to their statement, the officials took wastewater samples from both the discharge point and the enterprise, which is the possible cause of the colored discharge and sent them to the Environmental Reference Laboratory for a comparison test. The results showed that the source of the colored water originates from the textile washing plant located a few hundred meters from the discharge point.

"It has been understood that the wastewater originating from the said enterprise was pre-treated and delivered to the ISKI line, but the enterprise did not obtain the Discharge Quality Control License from the ISKI General Directorate."

The statement also explains why they narrowed it down to one facility being the contributing factor to the colored water.

"The wastewater flowing from the discharge point originates only from this enterprise because of the elevation difference of the infrastructure in the region. It has been reported that the problem is likely to be resolved within three days."

The factory's operations have been stopped since they are working without the permission of the Environmental Impact Assessment (EIA). However, the business has decided to apply to the relevant court to stop the implementation of the order.

The pollution of the stream should not be taken lightly as the chemicals in the stream can cause serious damage to the ecological balance, causing many fish species to die.

"They also have long-term effects. When the chemicals reach the seas via streams, they can cause serious pollution and damage in the marine ecology,” environmental engineer Mustafa Öztürk told DHA in March.

Environmental pollution has been hitting other streams of Istanbul as well causing mass fish deaths. The color of Riva Stream in Beykoz has turned black due to wastewater from factories around it.

Last year, when Istanbul’s famed Golden Horn changed color, the municipality claimed an “algae bloom” is responsible for the unusual color. However, some were under the impression that the municipality has not been cleaning it up.