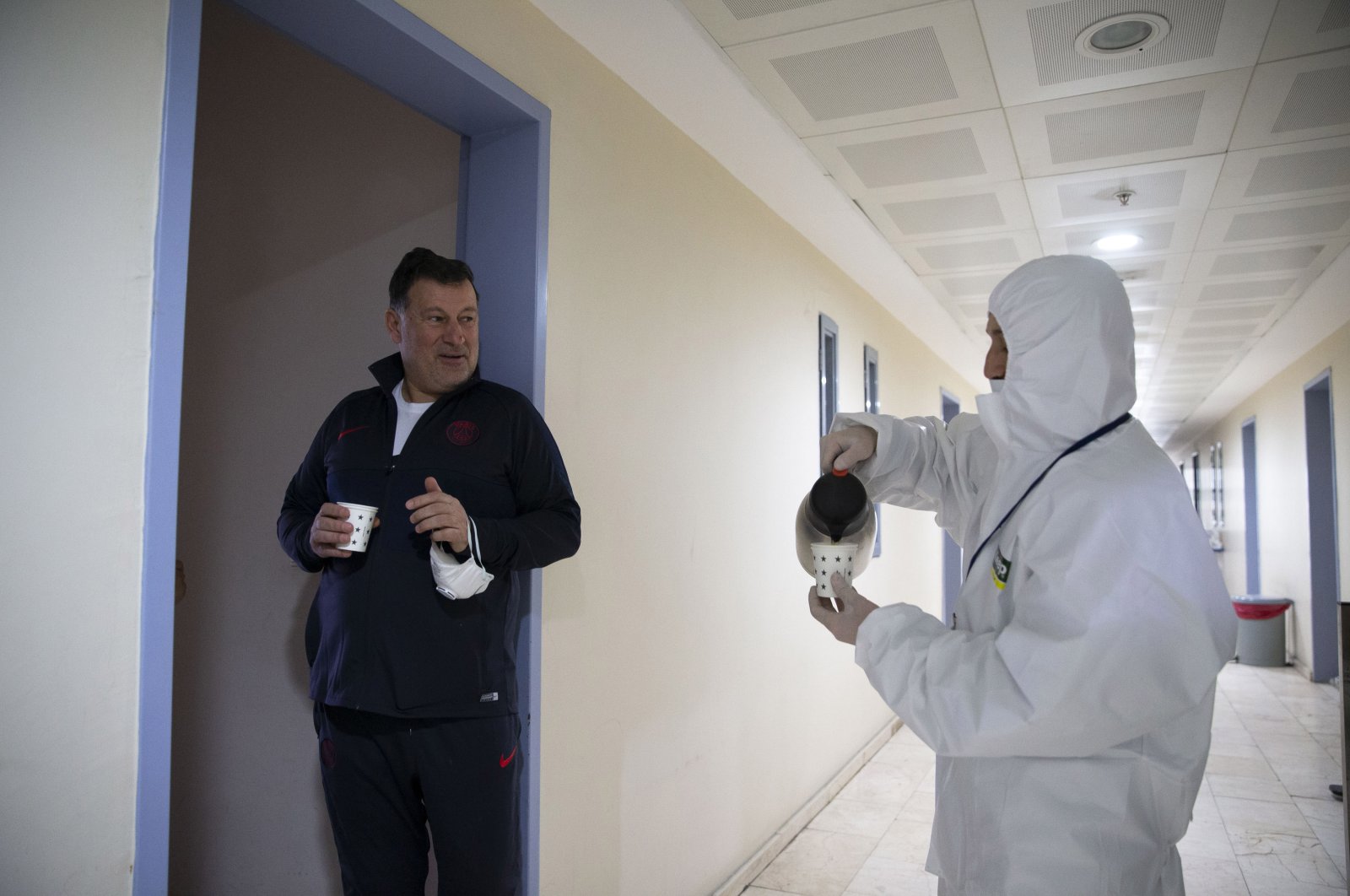 Turkey’s heightened measures against the COVID-19 outbreak continue as the death toll hits 59, while thousands of arrivals from abroad await the end of their quarantine period

Turkey is sticking to strict measures to stave off the COVID-19 outbreak, which has claimed 59 lives so far. For thousands who arrived from Europe and elsewhere, a quarantine remains in place at least through the end of next week while authorities roll out new restrictions almost every day.

The number of coronavirus patients in Turkey increased by 561 on Wednesday, taking the total number of infections to 2,433. Health Minister Fahrettin Koca announced the figures with a slight warning, saying that “precautions bind us to life.” “Some 5,035 tests have been conducted in the last 24 hours, 561 of which returned positive,” Koca said. “Fifteen of our patients have passed away .. Number cannot explain the grief of loss or anxiety. Let’s try to live with zero risks,” he added. Turkey has so far conducted nearly 28,000 tests. President Recep Tayyip Erdoğan said Wednesday that the country was monitoring a further 53,000 people at their homes and 8,554 others in hospitals. Also on Wednesday, the government announced that it would extend the closure of schools in the country until April 30 due to the coronavirus pandemic. Education Minister Ziya Selçuk announced after a meeting of a science council that education would continue with online and broadcast lessons, adding that make-up classes would also be held. The Council of Higher Education President Yekta Saraç announced Thursday that universities would also remain closed though university admission exams would be held in July.

About 11,000 people have been brought to Turkey from overseas since early March and placed under quarantine. Along with those who returned from a pilgrimage in Saudi Arabia, students attending European universities are staying in designated dormitories across the country, awaiting the end of a 14-day quarantine.

Turkey arranged dozens of flights to bring Turkish citizens from Europe and accommodated them at dormitories for university students who left after universities were shut down as a precaution against the outbreak. Health Ministry staff and crews tasked by the government have extended a helping hand for those in quarantine.

Returnees were screened at the airport and were then taken to dormitories where they would live for two weeks. Each returnee stays in one room and dormitories are staffed with personnel wearing head-to-toe protective gear. The Turkish Red Crescent supplies three meals a day for each person. The staff also regularly checks the health status of returnees.

The country also helps foreigners stranded in Turkey. About 1,500 passengers from Algeria, Jordan and Tunisia, who cannot go home as their countries’ airspace was closed to flights, were accommodated at dormitories in the northern city of Karabük. These passengers were waiting at Istanbul Airport for admission by their countries, but as the waiting prolonged, Turkey moved to accommodate them in dormitories.

Payment at home for the elderly

Turkey began paying pensions for citizens aged 65 and above at home, days after a curfew exclusively for them started. Senior citizens can already have all their needs, from grocery shopping to medical needs, met with a call to hotlines set up by the government. Crews deployed by governorates were also helping them to withdraw pensions from ATMs. On Thursday, the staff of a state-run PTT postal office also started delivering pensions to the elderly across the country.

The Interior Ministry on Thursday issued a notice to all 81 governor's offices, postponing metropolitan, provincial, district and local administrations' plenary sessions that were scheduled to be held in April, May and June. The planned plenary sessions of these administrations are now postponed until further notice. In the case of force majeure, local administrations may hold extraordinary meetings under relevant legislation to prevent any interruption to local duties as long as necessary health measures are taken.

To contain the virus, the country has closed or put restrictions on usually crowded venues, from cafes and bars to restaurants. Mass prayers at mosques were also suspended, along with sports events and flights to dozens of countries. Wedding halls, a potential ground for infection, were also closed. Municipalities officiating weddings, however, seek to keep this festive occasion impacted as little as possible by the coronavirus measures. In Istanbul, the municipalities either send civil servants officiating weddings to the homes of would-be couples or broadcast online wedding ceremonies with a few guests, allowing dozens or hundreds of relatives unable to attend the wedding parties to watch the couples wed. Couples at wedding halls run by municipalities are mandated to wear masks while a few select guests watching the wedding have to wait for a civil servant to officiate the wedding outside the hall. Couples and guests are also instructed to maintain 1.5 meters of distance between themselves.

There may be some positive effects of measures against the coronavirus as well. In the northern city of Trabzon, for instance, crime rates dropped 60% though police hotlines remain busy with complaints about people violating anti-virus measures. Still, police remain on alert against possible thefts from closed shops and other places. In Istanbul’s Arnavutköy district, locals complain about the increasing cases of shoe thefts from houses. While most people comply with advice to stay home, few apparently gave up the habit of leaving their shoes outside their apartments, giving an opportunity to thieves unable to break in to get away with whatever they can.

A glimmer of hope in June

The most pressing question for everyone is when the outbreak will end or the number of cases will drop. For professor Serhat Ünal, there might be “an improvement” in the situation if strict measures remain in place and people comply with them.

Ünal, a member of the Coronavirus Science Board set up by the Health Ministry for measures against the virus, told Demirören News Agency (DHA) Thursday that the more people that heed their recommendations, the earlier the danger will pass. “If citizens strictly follow the recommendations, stay at home, wash their hands more often, I guess there will be an improvement in the situation, God willing, in early June,” he said. Ünal said the virus arrived in Turkey later than other countries, giving them more time to prepare to fight against it.

“One of the most important measures to fight the virus is washing your hands frequently. If you can’t, you should use hand sanitizers, and if you don’t have them, clean your hands with cologne. Do not go into crowded places and keep your distance from others. We can break the chain of infections by not coming together, by staying at home and keeping our hands clean,” he said. He added that there were scientific calculations about when the number of cases will peak but they were all based on projections. He noted that antiviral drugs brought from China recently were being administered to COVID-19 patients and said they may help slow the virus from spreading.