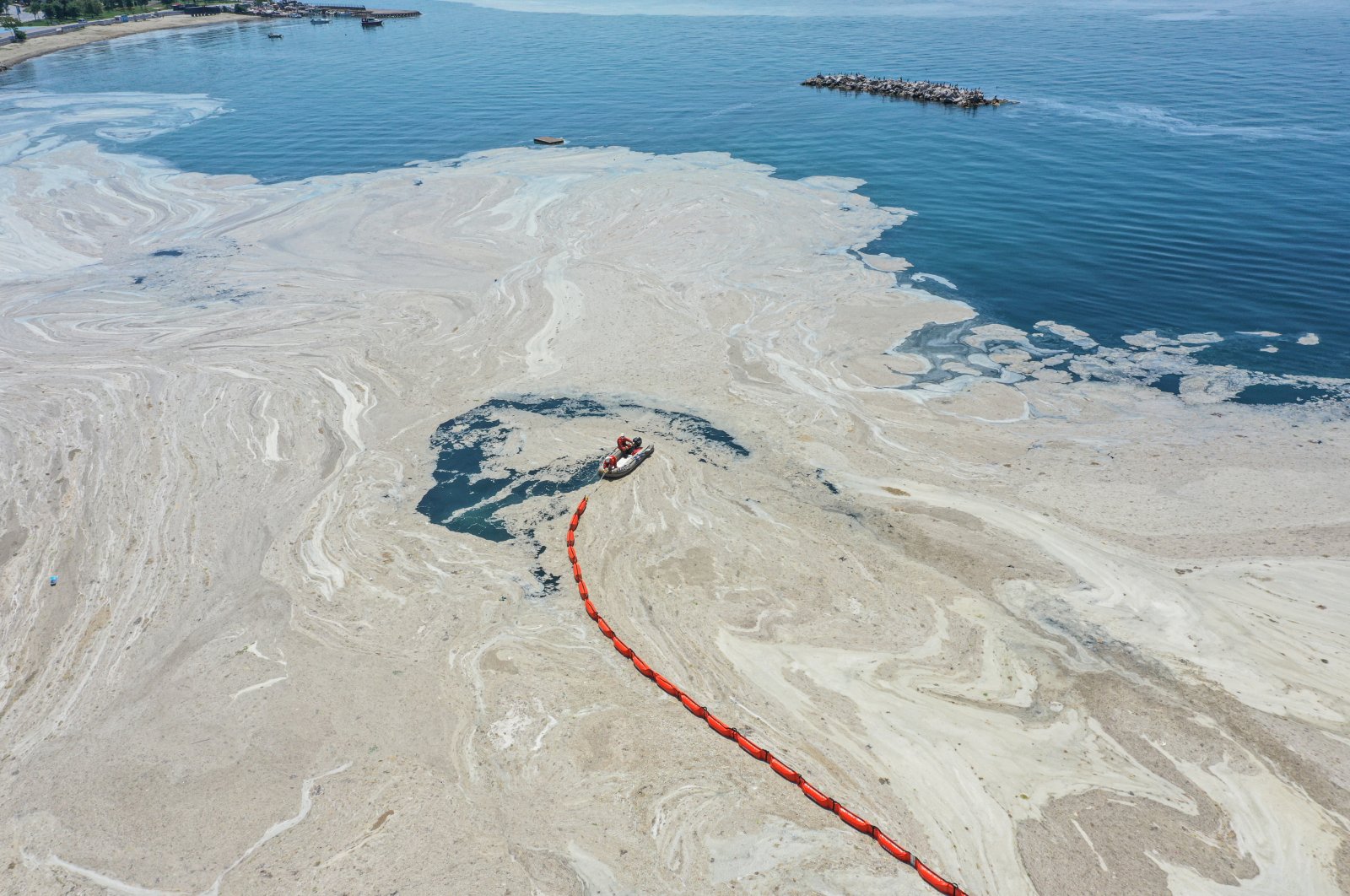 "We will not abandon our Marmara to its fate," Environment and Urban Planning Minister Murat Kurum said Sunday as he boarded a research vessel examining notorious "sea snot" in the eponymous sea. Kurum was in Kocaeli, one of the provinces affected by the thick layer of marine mucilage covering parts of the Marmara close to the shore. Mayors, academics and representatives of nonprofit groups have been running a workshop in Kocaeli to create an emergency action plan for the disastrous phenomenon threatening the ecosystem over the past few months. The plan is expected to be unveiled later Sunday.

"Sea snot," an organic matter, spread through the Marmara, already under threat of pollution, just in a few months, something attributed to rising seawater temperatures and pollution from untreated waste poured into the sea and its tributaries. Along with flora and fauna, it threatens the fishing industry. It depleted oxygen levels on the bottom while scaring away swimmers. So far, it was spotted in almost all cities littoral to the sea, from Istanbul to Kocaeli, Tekirdağ to Bursa. Cleaning efforts are underway, but experts say it will take at least a few years for it to completely disappear.

President Recep Tayyip Erdoğan on Saturday had pledged to "clear our seas from the mucilage scourge" and instructed officials to take action. Bilim-2, a research vessel of Middle East Technical University (METU), has been examining the body of water for the past week to analyze mucilage and give recommendations to officials on how to tackle the problem.

"Just as what our president did in the Golden Horn, we will take all the necessary steps to address this problem for 25 million people living in the region," he said, referring to Erdoğan's work to save the Istanbul water inlet during his tenure as the city's mayor in the 1990s.

Kurum said the research vessel collected samples from 91 spots across the Marmara, and they were working on long-term plans in cooperation with scientists, municipalities and industry representatives. "Hopefully, together we will protect our Marmara within the framework of a disaster management plan," he said. "We will take all the necessary steps within three years and realize the projects that will save not only the present but also the future together," the minister added. Kurum said municipalities would also be given technical and financial support to address the problem.

The minister stated that the action plan would contain a diverse program, from tracking and elimination of solid waste to faster collection of garbage dumped in the sea. He said they were also investigating the increasing seawater temperatures, noting findings that the Marmara was now warmer than the Aegean Sea in the west, and they were looking into its causes.

Sea snot is basically a huge collection of microorganisms that increases with the discharge of nutrient-rich sewage into the sea. Experts say wastewater treatment plants were needed to be improved and increased in the number. They also call for promotion of less-polluting industries relying on water less.

A report by the Turkish Academy of Sciences on mucilage says the burden of the population, as well as the industrial and agricultural activity in the Marmara Sea, have reached intolerable levels for the sea. It highlights that “excessive biological production” (of organic matter) leads to chronic problems like a decline in oxygen levels. It blames insufficient waste water treatment plants for increasing prevalence of mucilage. It calls for better “processing capacity” for plants.

Municipalities are currently dispatching boats to clean up the mucilage, which can only be dispersed by strong winds otherwise. In Bursa, a province littoral to the Marmara, the municipality and a university joined forces to use the collected mucilage in agriculture. Authorities plan to recycle sea snot into fertilizers. Professor Mete Yılmaz of Bursa Technical University (BTÜ), which oversees the project, said they were examining the mucilage to be used in fertilizing soil. He said they were now working on purifying the sea snot of salt and other components for its ultimate use in agriculture. “After safety tests, we will determine if the mucilage can be used as fertilizer. We know that materials in the mucilage have antibacterial, antifungal, antiviral features. We are examining whether it can be used as a biopesticide,” he told Anadolu Agency (AA) on Sunday.