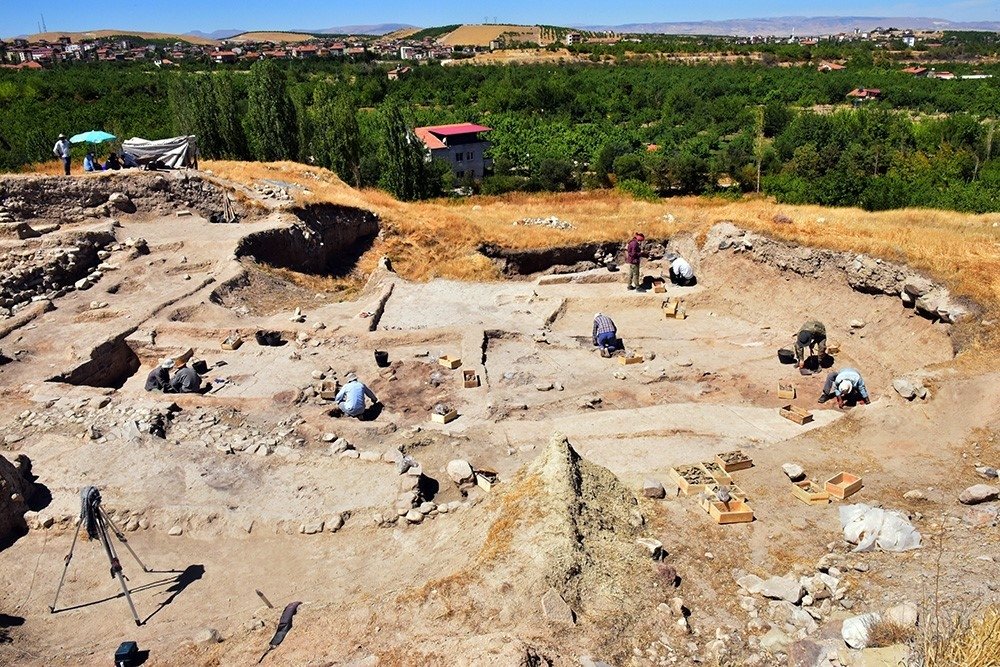 The graves and remains of houses are seen at the Arslantepe Mound in eastern Malatya province, Turkey, Sept. 4, 2021. (IHA Photo)
by Anadolu Agency Sep 05, 2021 1:12 pm
RECOMMENDED

Dozens of graves and the remains of houses were found during excavations of the 7,000-year-old ancient mound of Arslantepe, a governorate in eastern Turkey said Saturday.

Malatya Governor Aydın Baruş visited the mound to learn about the studies in the region from the head of the excavations, Francesca Balossi Restelli, local director of culture and tourism, Çetin Şişman, and the former head of excavation work, professor Marcella Frangipane, the provincial governorate said in a statement.

Teams are still working to complete the roof portion of the project as soon as possible, Baruş noted.

Twenty-four graves and the remains of six houses, estimated to date back to before 3600-3700 B.C., were discovered during excavations that started on Aug. 10 at the mound, said Restelli.

She said that during their work, the team discovered artifacts from the Late Chalcolithic Age to the Late Hittite Period.

It is estimated that the artifacts were built much earlier than Arslantepe Palace, she explained, adding that there are indications that the region was populated by the ruling class.

The archaeological mound was added to the UNESCO World Heritage List on July 26.

The decision to add the Arslantepe Mound was made during the Extended 44th UNESCO World Heritage Committee online session in Fuzhou, China.

Arslantepe, meaning Lion Hill, has been on the UNESCO's World Heritage Tentative List since 2014.

The mound brings the number of Turkish sites on the UNESCO World Heritage List to 19.

"It is a four-hectare and 30-meter-high archaeological mound dominating the plain and formed by the superimposition of settlements for millennia, from at least the 6th millennium B.C.E. to the late Roman period," said UNESCO.