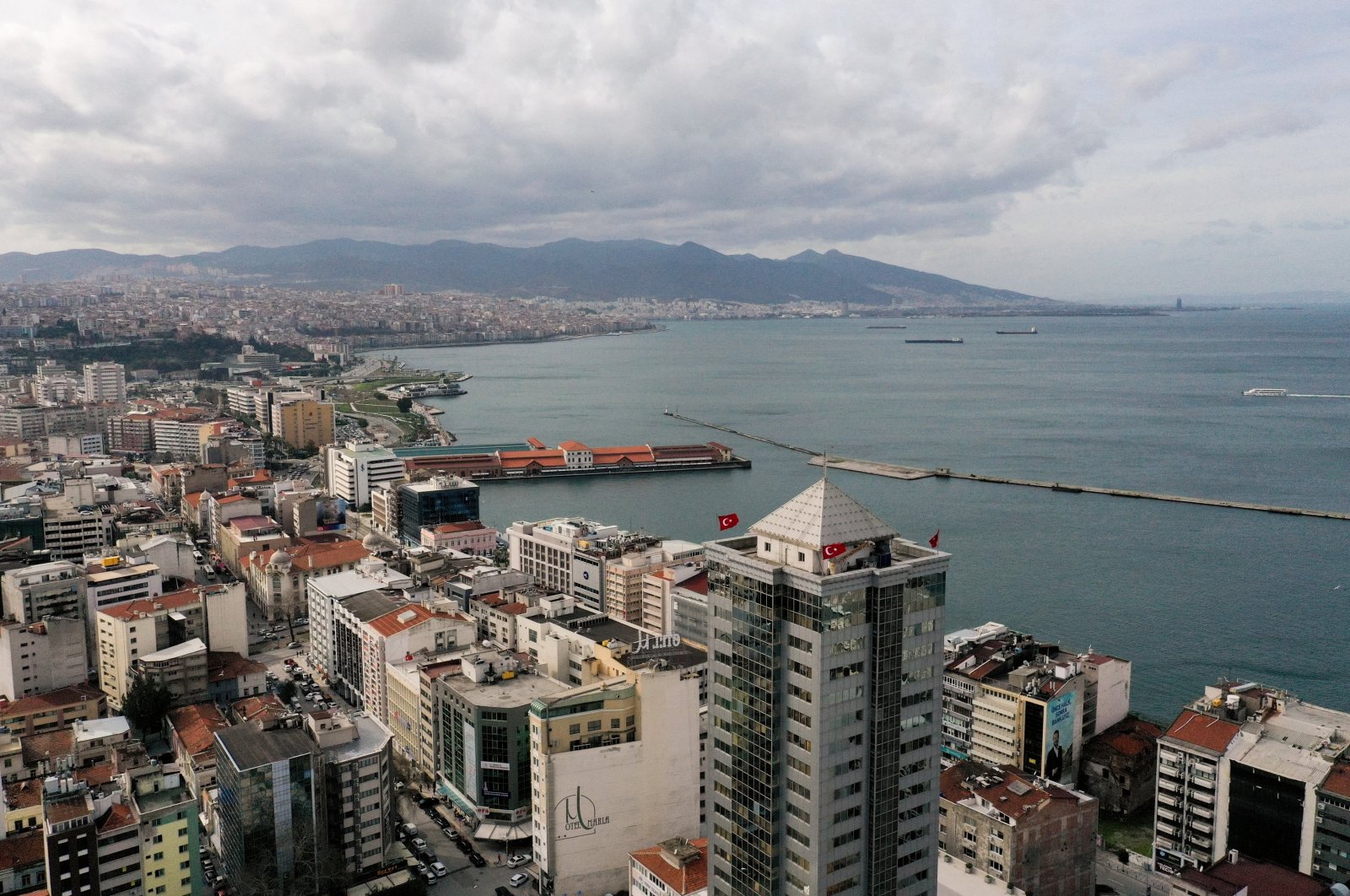 A view from downtown Izmir of the Karaburun peninsula in the background, which was the closest to the epicenter of two earthquakes in the Aegean, in western Turkey, Feb. 1, 2021. (AA Photo)
by DAILY SABAH Feb 03, 2021 2:26 pm

Izmir was shaken by two earthquakes on Monday and though the Aegean province got away unscathed a few months after a deadly temblor, experts warn that uncertainty surrounding the abundance of fault lines remains a concern

Stretching across the country’s western shores, the Aegean region is an indented swathe of cities and towns where the eponymous sea cuts through the land that mountains face. Most settlements face countless islands, small and large, dotting the sea. The geography owes its current shape to earthquakes and shifts in tectonic plates. Izmir, which lies at the heart of the region, now faces the risk from those same earthquakes.

The country’s third-largest province strives to recover from one of the deadliest tremors in its recent years which killed 117 people a few months ago. The fear prevails among locals not accustomed to such temblors usually seen in northwestern and eastern parts of the country. But experts warn that there may be more to come, in the wake of two 5.1 magnitude earthquakes that triggered concerns among locals on Monday. There were no casualties or damage, but as in each earthquake, it reignited fears of whether it is the harbinger of a bigger earthquake.

The wider region is located right in the middle of a place where three tectonic plates stretching to Africa, the Middle East and the Eurasian region meet up. Arabian and Eurasian plates collide to the east of the Aegean, in an area covering Izmir and other Turkish provinces. Their collision pushes the Anatolian plate further north toward the west, creating the potential for earthquakes. The October earthquake had its epicenter on the western edge of the Anatolian plate. To the east of Izmir, lies Gediz graben, a depressed block of the crust of a planet bordered by parallel faults. To the south, lies Küçük Menderes fault line while another called Tuzla fault line stretches from the province’s southwest to the northeast.

Professor Övgün Ahmet Ercan gives a grim outlook on the fate of Izmir when it comes to temblors. The prominent geophysics expert had advised locals to “go to their summer houses” as the earthquakes, preceded and followed by a series of tremors of lesser magnitude rocked an area off the coast of the Karaburun district of the province. Though the district was the nearest to the epicenter, some 40 kilometers (24.9 miles) off its coast, the earthquake is actually of “foreign origin,” stemming from the movement of the Lesbos fault which takes its name from the nearby Greek island. The earthquake was felt there too, as well as in Turkish provinces north of Izmir.

Ercan points out “an earthquake storm” in the region, something not every expert agrees with. “We first dismissed it as a minor earthquake as the 5.1 magnitude tremor followed a 4.1 one but 4.6 magnitude which followed it, indicates that this is not ‘a main earthquake.’ Then, we have seen more earthquakes throughout the day. This is unusual. There is a hail of earthquakes,” he told Demirören News Agency (DHA) on Tuesday. He pointed out an accumulation of stress on the Lesbos fault line and the line failed to emit it. “This region is pregnant with a potential earthquake. There was a 6.3 magnitude earthquake in this region in 2017 (off Greek island of Kos and 10 kilometers southeast of Muğla, south of Izmir), but the current stress shows that there is a potential for an earthquake as big as 7.2 magnitude. Until this big earthquake, we can expect consecutive earthquakes,” he warned.

“The fault lines may appear closer to Lesbos, but Turkey’s distance there is only about 15 kilometers. October’s earthquake in Izmir had its epicenter actually near the Greek island of Samos, but it wreaked havoc in (Izmir district) Bayraklı. Now, the earthquakes moved to Lesbos and Lesbos is close to Karşıyaka, Çiğli and Menemen districts. These districts, in turn, are close to wetlands where the ground cannot be sturdy enough,” Ercan added. He says that the ground is “tired” after recent earthquakes and may not support structures above it and even a minor earthquake may be devastating. “Some buildings in certain districts and neighborhoods like Karşıyaka, Bostanlı, Mavişehir, Bayraklı and Bornova may not be resistant enough to the next earthquake after they experienced the impact of (October) earthquake,” he added. Ercan says a potential earthquake in Lesbos will also affect all settlements in a perimeter of about 150 kilometers, from parts of Aydın province to Manisa.

Dr. Oğuz Gündoğdu, a geology expert, classifies Monday’s earthquakes simply as aftershocks of the October 2020 earthquake. “This is not an earthquake swarm as some people claim. I wish they would be so and then, the stress (on the fault line) would be reduced,” he told broadcaster CNN Türk. He said the Lesbos fault line is unable to generate a major earthquake. According to professor Şükrü Ersoy of Yıldız Technical University (YTÜ), the Lesbos fault has the capacity to generate earthquakes close to the magnitude of 7.0. “The danger was always there. Gulf of Izmir is particularly exposed to the risk of a tsunami,” he warns. Ersoy told CNN Türk that the Aegean Sea is crisscrossed with multiple fault lines that led to major earthquakes throughout history.

“We don’t predict one earthquake for Izmir. We predict 100 earthquakes because there are fault lines everywhere, to its north, to its south, at sea, on the land, in neighboring provinces. What we have not seen so far is an earthquake on the land. All recent earthquakes were at sea. We see a sequence of earthquakes south of Lesbos and the activity there continues,” he said.