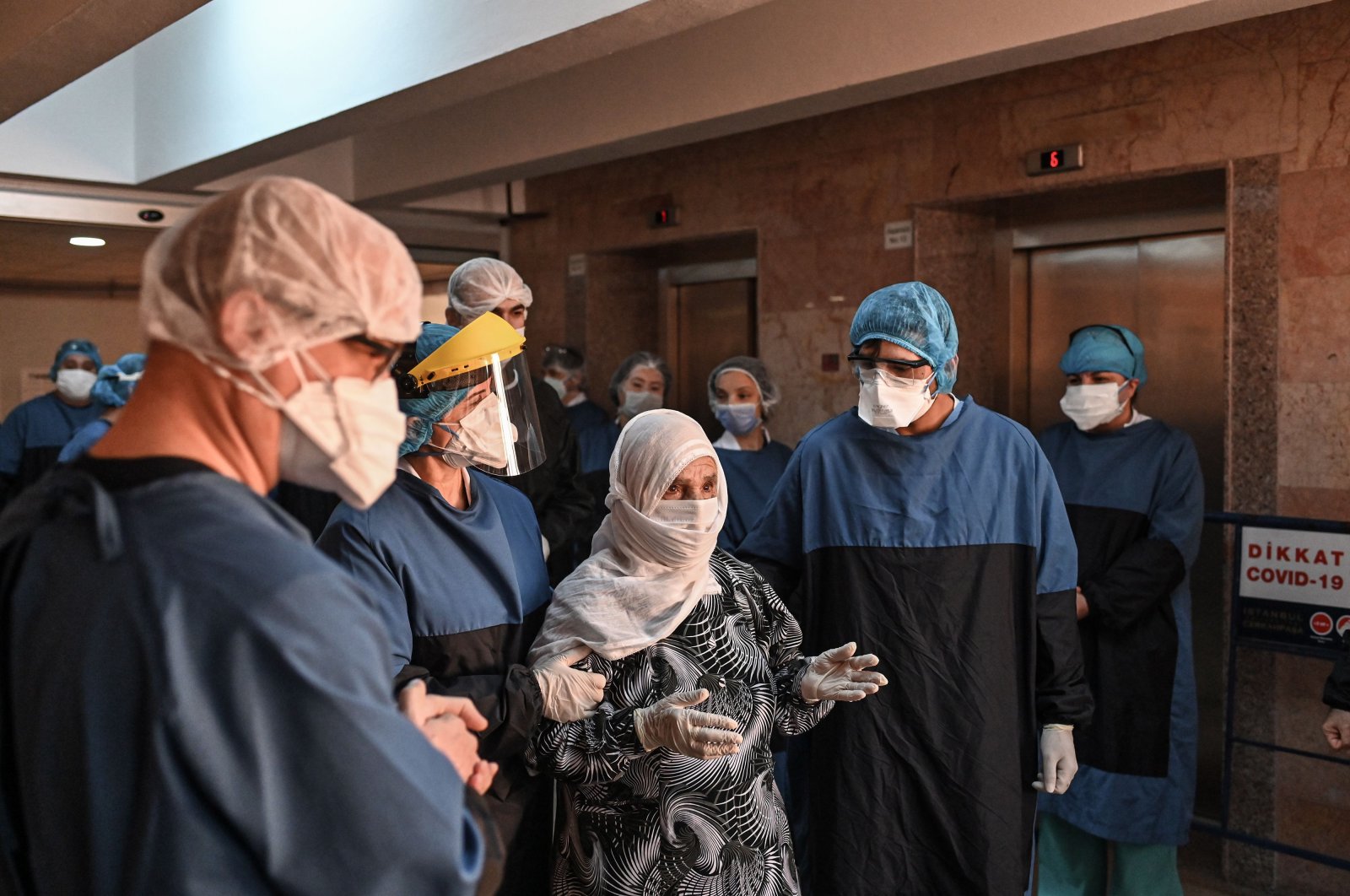 They may be among the most vulnerable to COVID-19, but a growing number of recovering nonagenarians in Turkey shows there is still hope against the pandemic, as the rate of increase in cases has started falling

A frail woman in a wheelchair received thunderous applause from doctors and nurses who lined up outside the hospital's exit after she recovered from COVID-19. This is a scene very common nowadays at hospitals across Turkey. Events like these spark hope among the citizens of a country that is facing difficult times due to the coronavirus pandemic.

They may be in the primary at-risk group from the deadly virus but senior citizens, particularly nonagenarians, are exhibiting a tremendous resilience against the disease. Certainly, the virus does not discriminate – it can affect anyone, regardless of race, nationality, ethnicity or age – but age-related illnesses can aggravate the symptoms of the disease for many.

So, how did the 107-year-old Havahan Karadeniz or 96-year-old İsmail Kırdar walk out healthy from hospitals after catching the virus? Experts cannot answer this question, though the answer is likely to do with stronger immunity, something lacking in younger generations mired in less healthy lifestyles, and other factors causing one’s body to drop its guard against viruses. Undoubtedly, the tireless work of health care professionals and early diagnosis should be credited for the recoveries of senior citizens. There is no vaccine yet for the virus, and doctors must resort to every treatment method at their disposal, using drugs proven effective against similar diseases.

Karadeniz is regarded as one of the oldest in the world to beat the virus. “This is a good hospital with good staff. May God bless them. I will tell everyone how they treated me,” she said as she left a hospital in Istanbul in the company of her great-grandson. Also in Istanbul, 93-year-old Alye Gündüz, who was admitted to the hospital on April 1, recovered after 10 days of treatment. She is 13 years older than Şadiye Sarıcık, another Istanbul resident who thought she had a cold when she tested positive for coronavirus but went on to recover.

Recovered elderly patients are not limited to Istanbul. In İzmir, 96-year-old Kırdar left the hospital fully recovered after testing positive. Similarly, 84-year-old Veli Seven, a nursing home resident in the western city, spent eight days in the hospital before he was discharged amid the applause of health care staff. Cemil Doğan Gencer, 85, is another survivor from İzmir. The 87-year-old İbrahim Özmen from the eastern city of Erzurum also recovered successfully.

The 82-year-old Bekir Karakaya stands out among other recovered patients. Karakaya, who was under treatment for 12 days, had other illnesses including chronic bronchitis, Type 2 diabetes and high blood pressure, but he recovered anyway.

Recoveries among the elderly have also been reported in other countries. In the Chinese city of Wuhan, where the virus first emerged late last year, a 103-year-old woman recovered after just six days of treatment at a hospital, and safely returned home. In Iran, a 100-year-old coronavirus patient recovered from the virus and was discharged from Alborz University of Medical Sciences’ Sarallah Hospital in northern Alborz province, Iranian Students News Agency (ISNA) reported last Thursday.

Drop in rate of increase

Some 842 coronavirus patients have recovered across Turkey in the past 24 hours, Health Minister Fahrettin Koca announced Tuesday. The figure marks a single-day record for recoveries.

Speaking on Turkey's effectiveness in curbing the spread of COVID-19, Koca said the rate of increase in the number of cases started falling in the fourth week since the first infection was reported. “Having a decline in the speed of increase and a decline in mortality rates are solid signs that we are on the right path in the fight against the virus, that our measures are working and that we will have tangible results,” he said.

"We have tried to identify and contact people that each of the patients diagnosed positive has been in contact with over the last three days," Koca said.

Some 4,600 teams are working to track down possible cases, including 1,600 in the worst-hit Istanbul province.

"General screening is not the right method, nor is it rational in order to get reliable results. We will proceed by pinpointing our target," Koca said as he again spoke out against widespread testing.

Authorities repeatedly warn citizens to stay home, avoid frequented public spaces and adhere to social distancing if they have to go out. Turkey already imposed a curfew for the elderly and youth while introducing a fine for violators of social distancing. Empty streets and squares across the country indicate that the majority of the nation is heeding the call for self-isolation at home against the outbreak. This is more visible in big cities like Istanbul, Ankara and İzmir. Istanbul’s usually crowded spots like İstiklal Avenue and Eminönü on the European side, and Salacak esplanade on the Asian side were relatively quiet on Wednesday. Only a few people could be seen jogging or walking their dogs on the coast of Sarıyer on the European side. Bus stops remained problematic as passengers had trouble maintaining distance while waiting for their ride.

In Ankara, Kızılay, Sıhhiye and Anadolu, three major squares of the capital, were silent while traffic was nowhere near pre-outbreak levels. Ulus Square, circled by shops selling textiles and food, was still a bit crowded. Police officers patrolled the streets, warning people to keep a distance of at least 1.5 meters between them.

In İzmir, Turkey’s third-largest city, Konak and Gündoğdu squares were almost deserted. However, open marketplaces in some districts were crowded while shoppers strived to adhere to social distancing.

Meanwhile, the Interior Ministry lifted the lockdown in 41 locations in 14 provinces Wednesday while 227 locations in 58 provinces remain under quarantine. Pandemic boards set up in each province by local governorates decide on imposing and lifting quarantines in places where coronavirus cases are confirmed. In some provinces, the quarantine may cover an entire village or neighborhood while in some cities, a quarantine may be imposed on individual apartment buildings, barring entries and exits.

Turkish authorities announced Wednesday that 5,575 fast test kits used for diagnosing the novel coronavirus were seized in a raid in Istanbul Tuesday.

Acting on a tip-off, police raided a textile workshop in the city’s Şişli district where kits were being sold without permission from authorities. Two suspects were detained in the operation. They were released with judiciary control. Demirören News Agency (DHA) reported that the kits were imported from China and sold for $18 per kit.

The sale or use of test kits without permission from the Health Ministry is illegal in the country. Only health care professionals at hospitals designated for COVID-19 tests are allowed to run the tests, which require a laboratory environment. Several privately run laboratories have made the headlines recently for offering paid tests to customers despite the government's announcement that the selling of tests is illegal.