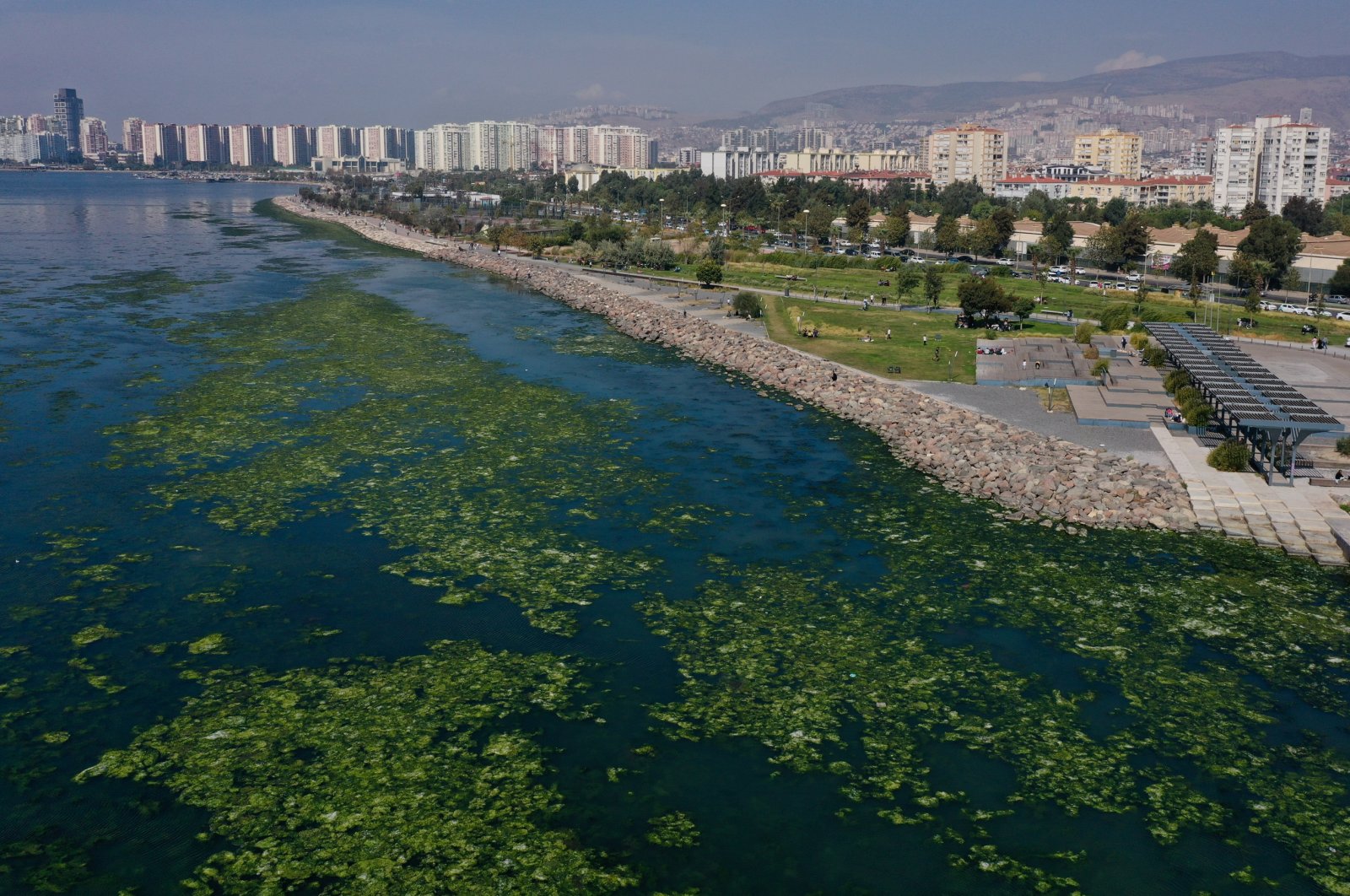 Months after the disappearance of 'sea snot,' Turkey’s seas face another threat from sea lettuce, which suppresses ecosystems, emerging on a coast in the western province of Izmir

It is not as much of an eyesore as "sea snot" and can be confused with common seaweed; however, sea lettuce, which covers swathes of water in the Gulf of Izmir, is just as dangerous. A type of edible green algae, the species is so far exclusive to the northern gulf of the Aegean Sea and across a lagoon that hosts a diverse array of birds from flamingos to egrets in the south. Sea lettuce is not a new phenomenon. Yet, it is back and bigger than ever.

A product of pollution like the sea snot that dominated the Marmara Sea for months, it may go away by itself soon and, if not, could be a serious threat to local marine life, experts warn.

The sight of lush green is unmistakable from a fishermen’s harbor in the Mavişehir neighborhood toward the Bostanlı pier. Çakalburnu lagoon, on the other side of the coast opposite Bostanlı, has not been spared by the lettuce. Workers of the Izmir Metropolitan Municipality continue to collect the lettuce for disposal, while calls grow for more action.

Professor Tevfik Tansel Tanrıkul from the province’s Katip Çelebi University says the lettuce is a type of algae that can grow in excess, “under the right environmental conditions and ground that provides nutrients.” The primary factors for its growth are the existence of nitrogen and phosphorus in the water, just like sea snot. These chemical elements are introduced to the unspoiled waters due to pollution. “It is a 90% possibility that household waste is behind this growth in nitrogen and phosphorus in places like gulfs,” Tanrıkul told Anadolu Agency (AA) on Monday. The waste is not directly dumped into the gulf, but Tanrıkul blames pollution in the streams or canals that connect to the gulf where the waste discharge is more prevalent. “Once the waste reaches critical levels, it creates a good environment for algae to grow,” he said. The shallow gulf is a convenient spot for sea lettuce, according to Tanrıkul, as it “has no currents” that will wash away the lettuce and the temperatures are rarely below 20 Celsius degrees (68 Fahrenheit degrees).

Though short-lived, the algae is still harmful to fauna. Its presence limits the light permeability in water, something essential for the fish below, as well as underwater flora, and reduces oxygen levels, again, a feature it shares with sea snot.

Its decomposition is another matter. Sea lettuce dies a natural death when circumstances for its growth disappear. Yet, rotting sea lettuce creates worse chemical pollution in the water, along with “an unsightly view,” Tanrıkul says. Rotting lettuce also emits hydrogen sulfide, producing a foul odor that causes a public nuisance. A long-term solution would be to reduce pollution in the water, but in the short term, experts recommend its disposal after removal from the water. “Not giving it an environment favorable for growth is not something you can do in a short time, but this is an environmental health concern,” Tanrıkul said.

He says that the sea lettuce is an unfortunate harbinger of sea snot for the Aegean. “If it has conditions allowing its growth, the same conditions can allow sea snot to grow as well. It is possible we will have sea snot in the Gulf of Izmir in the coming years,” he warned.

Most of the coasts in Turkey, surrounded by the Mediterranean, of which the Aegean is a part, and the Black Sea, are under the danger of chronic human-made pollution. The state of currents and appropriate seawater temperatures keep the risk lower but untreated waste discharge started looming large for seas, especially at a time of climate crisis. Nongovernmental organizations (NGOs) call authorities to improve wastewater treatment systems and invest more to increase their numbers. The landlocked Marmara is at particular risk as it is surrounded by big cities that also serve as industrial hubs.