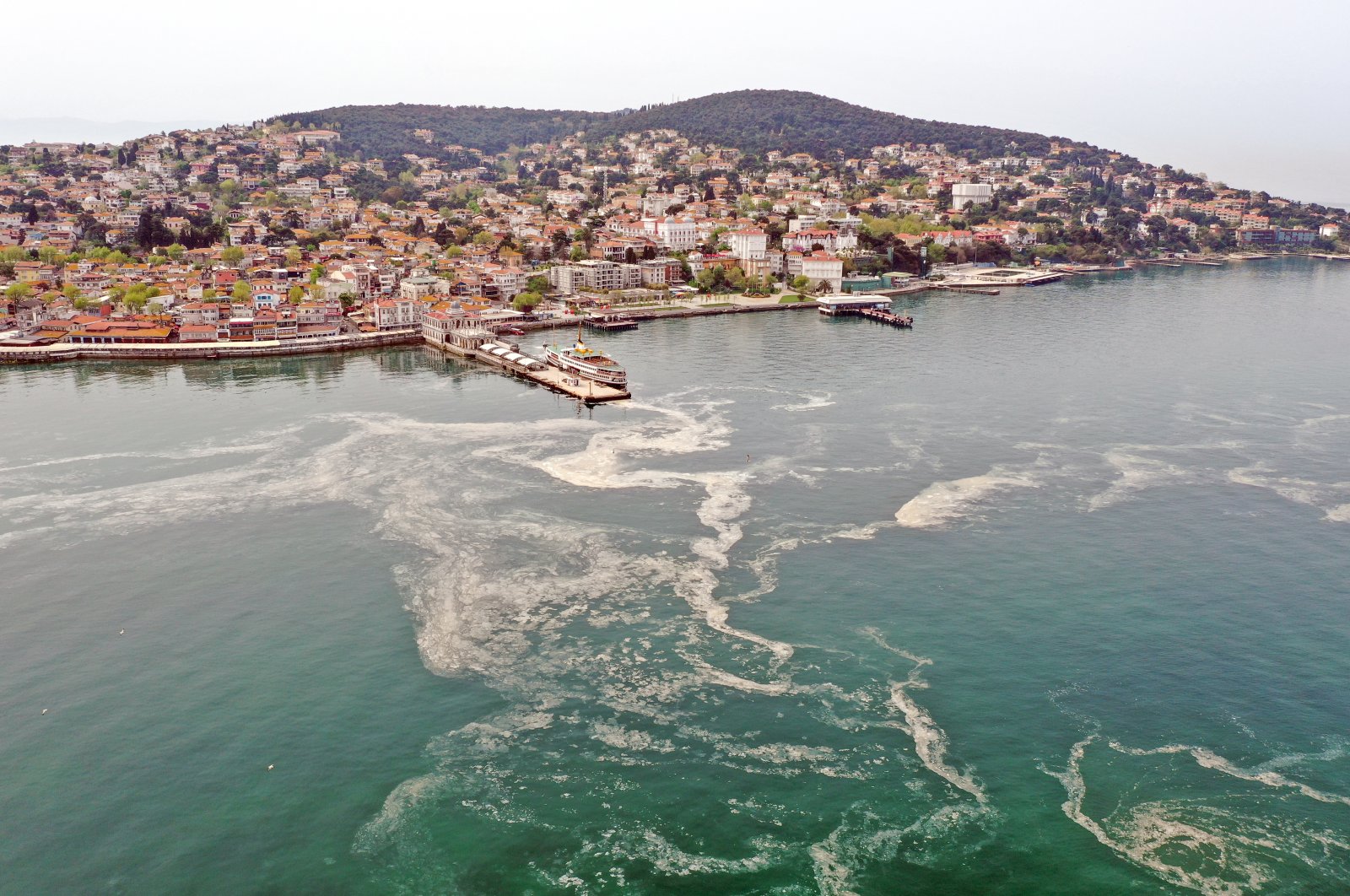 The sea snot is seen in this aerial picture taken near the pier of Büyükada, the largest of Istanbul's Princes Islands, in the Marmara sea, Turkey, May 2, 2021. (AA Photo)
by DAILY SABAH WITH AGENCIES May 04, 2021 12:11 pm
RECOMMENDED

The surface of Turkey's Marmara Sea has been covered in a thick jelly-like layer of slime for about six months. The sea snot, caused by sea pollution, poses a threat to the fishing industry as well as Turkey's tourism, which is already affected by the COVID-19 outbreak. Experts have called for local and governmental authorities to take action.

Sea snot, or marine mucilage, that has appeared due to the pollution in the Marmara Sea, which surrounds Istanbul and has a very important place in Turkish tourism, has reached worrying levels, causing alarm among the public and fishermen.

Sea snot is a jelly-like substance formed by the excessive proliferation of microscopic plants called phytoplankton, which enable biological life in the sea.

Sea snot has been present in the Adriatic and Mediterranean since the 18th century and mostly spread in the Marmara Sea during the winter of 2007-2008.

Bandırma Onyedi Eylül University Maritime Faculty Dean Mustafa Sarı explained the role of mucilages in nature and the reasons for their formation to Anadolu Agency (AA).

"The increase in the number of elements such as nitrogen and phosphorus in the sea is largely related to domestic waste such as sewage. Domestic waste released into the sea without treatment increases the nitrogen and phosphorus load of the seawater. The sea snot resulting from this excessive proliferation is generally seen from 5 meters (16 feet) to a depth of 25-30 meters."

It is predicted that if measures are not taken against sea snot, which makes it impossible to swim in the seas, tourism activities in the Marmara Sea will be negatively affected.

In addition, seafood may be more severely affected by pollution as sea snot sinks to the bottom of the sea. This is a factor that affects human health as well as the reduction of marine biodiversity.

The effect of sea snot on the economy is not limited to tourism. Fish prices are also expected to rise due to the crisis, which also makes fishing activities difficult.

Professor of Marine Biology at Çanakkale Onsekiz Mart University, Muhammet Türkoğlu evaluated this situation in an interview he gave to the AA.

"Divers and fishermen say that this situation has been going on for almost six months. For fishermen, especially the movement of the boats and the removal of fishing nets creates huge problems. When the reasons such as the decrease in the net capacity are added, the fish prices are expected to increase," he said.

Istanbul Metropolitan Municipality (IBB) announced on its website that they are involved in a new project to deal with sea snot. The project, in which IBB collaborates with the Ministry of Agriculture and Forestry and Bandırma Onyedi Eylül University, is seeking a solution to the crisis. For the project, the Marmara Sea is dredged and cleaned with sea surface cleaning boats.