Seven days amid flames: A journo’s account of wildfires in Turkey 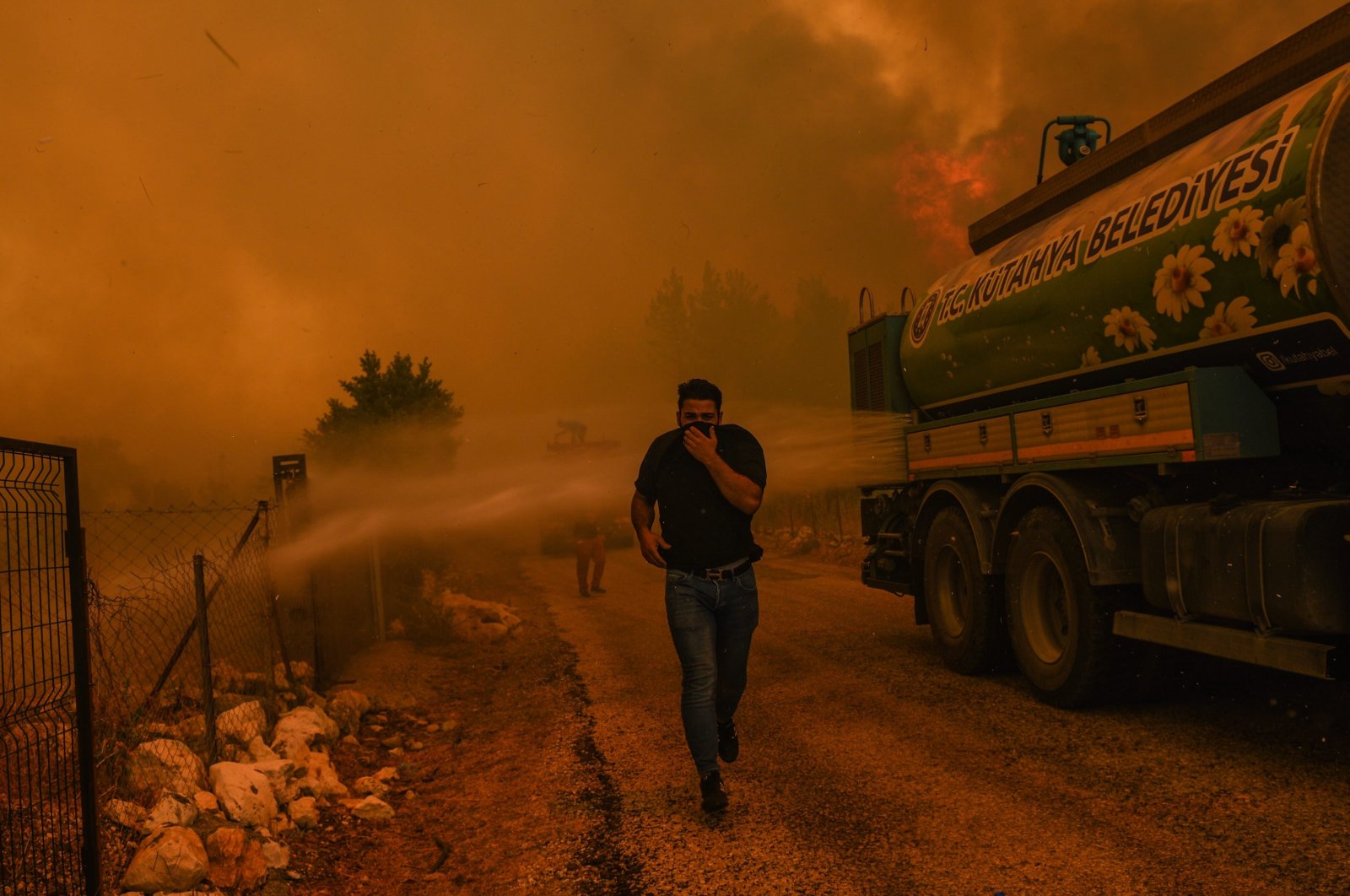 Turkey has been battling forest fires for days. Zeynel Yaman, a journalist for Sabah newspaper, gives a first-hand account of the tireless fight to contain the blazes

We have seen the fight, we have seen the struggle. Sometimes flames chased us, sometimes we were trapped under smoke. We have seen houses in villages reduced to rubble and we have seen how villagers heroically resisted the advancing flames. I still remember the words of villager Ibrahim Kaçar on the seventh day of fires: “We will not abandon our forest, our fields, our houses. We will regrow the forests, we will care for them again. There will be forests here again.”

The fire that broke out on July 28 in Manavgat (a district of Antalya province) encircled the villages on the outskirts of the Toros mountains. The villages, surrounded by pine forests, soon saw flames spread to neighboring villages, climbing towards the green slopes. I hit the road with my photographer colleague Murat Şengül to cover the fire the next day. We boarded an airplane, full of local and foreign tourists, on July 29. When the plane landed at Antalya Airport, we could see flames towering above Manavgat from the window.

As someone who has covered building and forest fires in Istanbul for years, I thought I had an idea of what the fire in Manavgat would be like. But when I saw the massive flames, everything I thought I knew about fires turned out to be nothing compared to what I witnessed in Manavgat.

It was about 2:30 a.m. when we arrived at a village and walked past citizens rushing to aid the extinguishing efforts. We approached crews of firefighters. Each one was exerting almost superhuman efforts against flames everywhere. Each was like mythical heroes fighting against "dragons" made of fire. We huddled together with a diverse crowd, from those uttering lamentation to those struggling to put out the burning pine cones propelled long distances by the fire and finally, those who arrived to help but ended up waiting in despair as there was nothing they could do other than watch the firefighters. I remember tightly grabbing a bottle of water all the while, but the moment never came to take a sip. Seeing the dire need for water to put out the fire, I somehow felt even this bottle could come in handy. Hours later, firefighters managed to put out the flames. I approached a forestry worker, an apparent veteran of such fires, and congratulated him. “We just did our duty. We will now go to other fires. They need us,” he solemnly said.

A great disaster had unfolded before our eyes and the images of the catastrophe had still not left our minds when we retired to our hotel rooms. In the morning, more striking yet odd images awaited us. Outside the hotel, people were having breakfast and swimming amid thick smoke in the air and ashes raining on the area like delicate snowflakes. I was puzzled at this scene. The hotel was mostly staffed by workers hailing from the villages fighting the fires. Finding out that we were journalists, they would often ask about the state of fires any time they could find in between serving tourists. During our week in Manavgat, we often bumped into them in their villages, helping the extinguishing efforts once their shifts at the hotels ended.

Our next stopover was the Kalemler village, one of the places most affected by the wildfire. Driving through burned forests and fields, we arrived at a scene of destruction. I have seen enough buildings in my lifetime that fell victim to fires. But this time, the number was much higher. There were more than 50 houses and stables completely destroyed by the fire. There wasn’t even a single piece of furniture or household item left untouched by the flames. Kalemler was almost a summary of the devastation the wildfire left behind. A heavy stench from burned wood and ash was ubiquitous. It was so intense that it blocked the stench of the bodies of a couple who died in the fire. Their bodies were found days later.

Temperatures were not helping either. At more than 40 degrees Celsius (104 degrees Fahrenheit), we started our round of coverage in affected places. We stopped by the village of Salur, where we came across a small fire. We had barely started taking photos when the flames rapidly spread across the forest within a few minutes. A violent wind fed the flames. A cold wind blowing from the sea through lush mountains was worsening the fire. It was turning everyone, everything, from firefighters to water bomber planes and helicopters, into soldiers fighting a giant with their primitive swords. Right before our eyes, everything was on fire, from trees to cemeteries. We had nothing we could do other than crying in front of this sheer scale of destruction. Soon, we found something we could do, though: convincing a family to leave the area, as they were swinging fresh olive branches towards the flames taking over their field. Just then, the wind changed its course and in the blink of an eye, flames reaching the height of two pine trees atop each other stopped moving.

One thing that will stay with us long after the fires will certainly be the fight of villagers against the blazes. These people, who trace their roots in these villages back to a thousand years ago, did all they could against the fire. In the Taşağıl and Sırtköy fires, we were literally inside the fire, with flames showing up at every corner. In some fires and floods, you can protect yourself from the disaster by reaching a safe area – but nowhere was safe from flames there. As we were watching helicopters and planes pouring water on flames, there were more and more coming out of almost nowhere, burning through grass and trees. Villagers, from boys and girls to women and men, were like in a war. Some were filling water into bottles, others were cutting off trees near their homes to prevent the fire from reaching them. Others were riding bulldozers to pour soil on the grass.

I came across Durkadın Kaçar there. The woman, with a 20-year-old disabled son, was constantly weeping, trying to do something against fires while in a state of fear and sorrow. Her husband Ibrahim Kaçar was the only force to stop her crying. “Why are you crying? If there is a fire, there is us too. We are not helpless against it,” he resolutely told her. Kaçar then joined fellow villagers and, together with firefighters, they put out the fire within hours. I didn’t know the names of these people then. I only found out who they were when I returned to the village to find them and asked the villagers about the man who scolded his wife. When we sat down for an interview, we discovered they were among villagers who planted that forest some 40 years ago as forestry workers. “We will plant again and there will be forest again,” Kaçar told me.

The fire in Sırtköy was scarier, more violent. As we climbed up a steep hill to reach the village, we crossed a blindingly white forest, what remained of a once lush place. As we arrived, flames were advancing towards LPG tanks of a plant set up to process bay laurel. We were watching the flames reaching the height of a high-rise building just outside the village when the firefighters, through loudspeakers, urged everyone to run away. I have been to countless fires before, but for the first time, we were running away from a fire together with firefighters. It was an inferno. I have seen firefighters praying to God to spare their lives.

In the company of villagers, we left for a safe zone outside the village. Everyone was waiting. Relatives of those in the village were frantically calling their families trapped inside. It hurt to hear the voices calling out “father, please answer, please get out.” About two hours later, the flames were contained inside the village but the fire was still continuing outside. I have seen scenes straight out of a war movie: people running around, paramedics rushing to the injured, helicopters, planes hovering above amid smoke. I took some photos of crying villagers but they were angry. They did not want to be viewed as desperate. Indeed, I witnessed them overcome the fear and agony and join the struggle against the fire. As we were leaving the village after the fire was contained, I saw women who had been crying earlier. All of them were smiling now. “We lost our homes but we did not lose our lives,” one of them said.

After a week, I returned to Istanbul, to my wife and my eight-month-old daughter and thanked God for reuniting me with them. But I still felt like I had abandoned people I shared fate with.