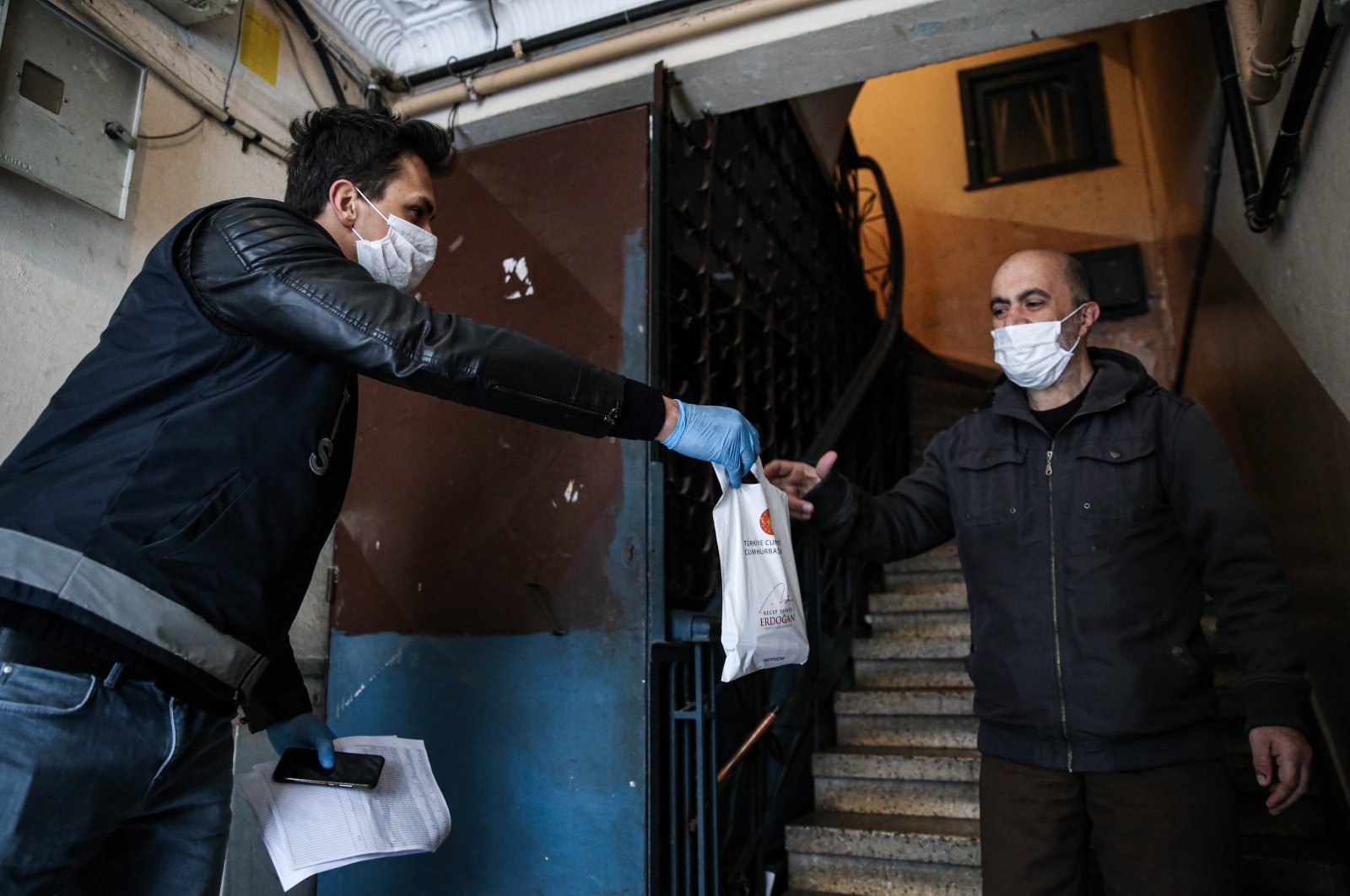 Free distribution of disinfectant cologne and masks for citizens aged 65 and above started in Istanbul as part of measures against the coronavirus outbreak in Turkey. The delivery comes a few days after the country announced that all citizens can place online orders for free masks. Istanbul is the first city to receive the deliveries, which will be made in other cities in the coming days as well.

More than 1.1 million people in Istanbul will receive bags containing a bottle of cologne and five masks. The deliveries cover those subject to a curfew for the elderly and people with chronic illnesses. Istanbul Governor Ali Yerlikaya said Wednesday that the campaign was a joint effort of the government and companies donating the materials in the bags, which also have a letter from President Recep Tayyip Erdoğan. In his letter, Erdoğan assures public for all measures against the outbreak and urges senior citizens not to leave home.

“We will not abandon our citizens in the high-risk group and people with no next of kin to help them. Our teams are ready to address your needs. Rest assured that no virus is stronger than Turkey,” the letter said.

“Turkey shows what it means to be a social state while the world is engaged in a war for masks. We set an example for the world,” Governor Yerlikaya said in a video recorded at a warehouse where masks and cologne are stored in Gebze, a town near Istanbul. Yerlikaya said that Turkey was acting with a spirit of unity and listed companies contributing to the campaign. Among them are two sugar manufacturers and a company producing alcoholic beverages that contributed raw materials for making cologne and the country’s leading cologne producers. Masks are supplied by an association of exporters, Istanbul Chamber of Commerce, an association of cloth manufacturers and two prominent textile companies. Amazon’s Turkey branch handles packaging and delivery, while police and gendarmerie units will deliver the bags to homes.

The country is already mobilized for the production of masks and other materials to help the health care workers and the needy. Defense Minister Hulusi Akar said Wednesday in a televised interview that the army’s factories and workshops producing textiles for the Turkish Armed Forces (TSK) are mass-producing masks, protective suits and disinfectants. He said they boosted the capacity with additional machinery and they were currently able to produce up to 4 million surgical masks weekly. “We can also produce 110,000 protective suits weekly and 5,000 liters of disinfectant. Next week, we will increase our production capacity for surgical masks to 10 million weekly so we can also send them to our allies,” he said.

In the meantime, a national solidarity campaign prevails with more donations. “We are self-sufficient campaign” launched by President Recep Tayyip Erdoğan last week saw donations reaching to more than TL 1.4 billion (about $206.8 million) with personal contributions. The public also sent 46 million text messages, each equivalent to TL 10 for the campaign. Officials say the donations will help to about 2.3 million families.

Erol Kohen, one of the leaders of Turkey’s Jewish community, announced on Wednesday he personally donated TL 1.2 million for the campaign. Earlier, İsak Haleva, chief rabbi of the Turkish Jewish Community, donated five months of his salary to the campaign. “I join this call for solidarity and support our health care workers who do an extraordinary job to save people infected with this virus and our country’s leaders. I believe we will overcome this disaster as soon as possible,” Kohen said.

Outbreak may subside in a few months

Turkey will be able to contain the coronavirus outbreak in the next few months if cases plateau out in the next three weeks with the help of measures, a member of the country’s task force for the virus said.

As the death toll from the COVID-19 pandemic mounts, Turkey sees a glimmer of hope in the coming weeks. Professor Levent Yamanel, a member of the Health Ministry’s Coronavirus Science Board, says they can bring the outbreak under control within the next two to three months if circumstances improve.

“If people comply with measures to prevent the virus from spreading, we will reach a critical threshold in two to three weeks and ensure a downhill trend after a peak period. If we can succeed in having cases plateau out, we will accomplish our mission and thus, in the next two to three months, there will be a possibility of having the outbreak under control,” Yamanel told Demirören News Agency (DHA) on Wednesday. “Citizens should comply with the measures and act with precaution. If they don’t, it will take us longer to reach the peak period and we will have more and more cases. I appeal to everyone to be cautious and stay home as long as possible,” he said.

Turkey on Tuesday confirmed 3,892 new coronavirus infections, a single-day record, as the total caseload exceeded 34,000. Health Minister Koca said 76 more patients died of COVID-19 in the past 24 hours with the death toll reaching 725. Koca also said Turkey has performed 222,868 coronavirus tests so far, including 20,023 in the past day. "We increased our test capacity. We expect the number of daily tests to exceed 30,000 next week," the minister said. Around 1,582 patients have recovered and have been discharged from hospitals, while 1,474 patients remain in intensive care, Koca added. The occupancy rate of intensive care units across Turkey stands at 62%-63%, he said.

Daily coronavirus infections in Turkey – the world's eighth-worst hit country by the number of active cases – have risen for the sixth consecutive day. Suggesting that curfew measures for people aged under 20 and over 65 have yielded results, Koca also said that new infections are now mostly seen in people aged between 20 and 65. The minister also dismissed rumors about a high mortality rate among patients under the age of 60, noting that only 10% of cases under 60 – excluding those with comorbid conditions – died due to COVID-19. Koca also announced that a new mobile application has been developed to monitor infected patients and their mobility. The application will send a warning to those leaving self-isolation procedures at home and will direct health care crews to the patient.

Yamanel said Turkey has been able to see the outcome of measures taken by the government in about three weeks. “What is crucial now is if we can reach the peak period that will be followed by a decline in cases. I recommend everyone who does not need to go out to stay home, to isolate themselves. Those who need to work should adhere to social distancing, wear masks in crowded areas and be careful about hand hygiene," he said.

He said daily life may not return to normal as quickly as expected after the cases peak. “Some countries eased restrictions after cases peaked and numbers dropped but this led to another surge, another peak period. We have to be cautious and resume our daily lives in a controlled way,” he said. According to Yamanel, the number of recoveries is good enough. “We have a good health care system, one of the best in Europe. We also have the advantage of an almost two-month delay in the first cases. This gave us time to prepare,” he said.