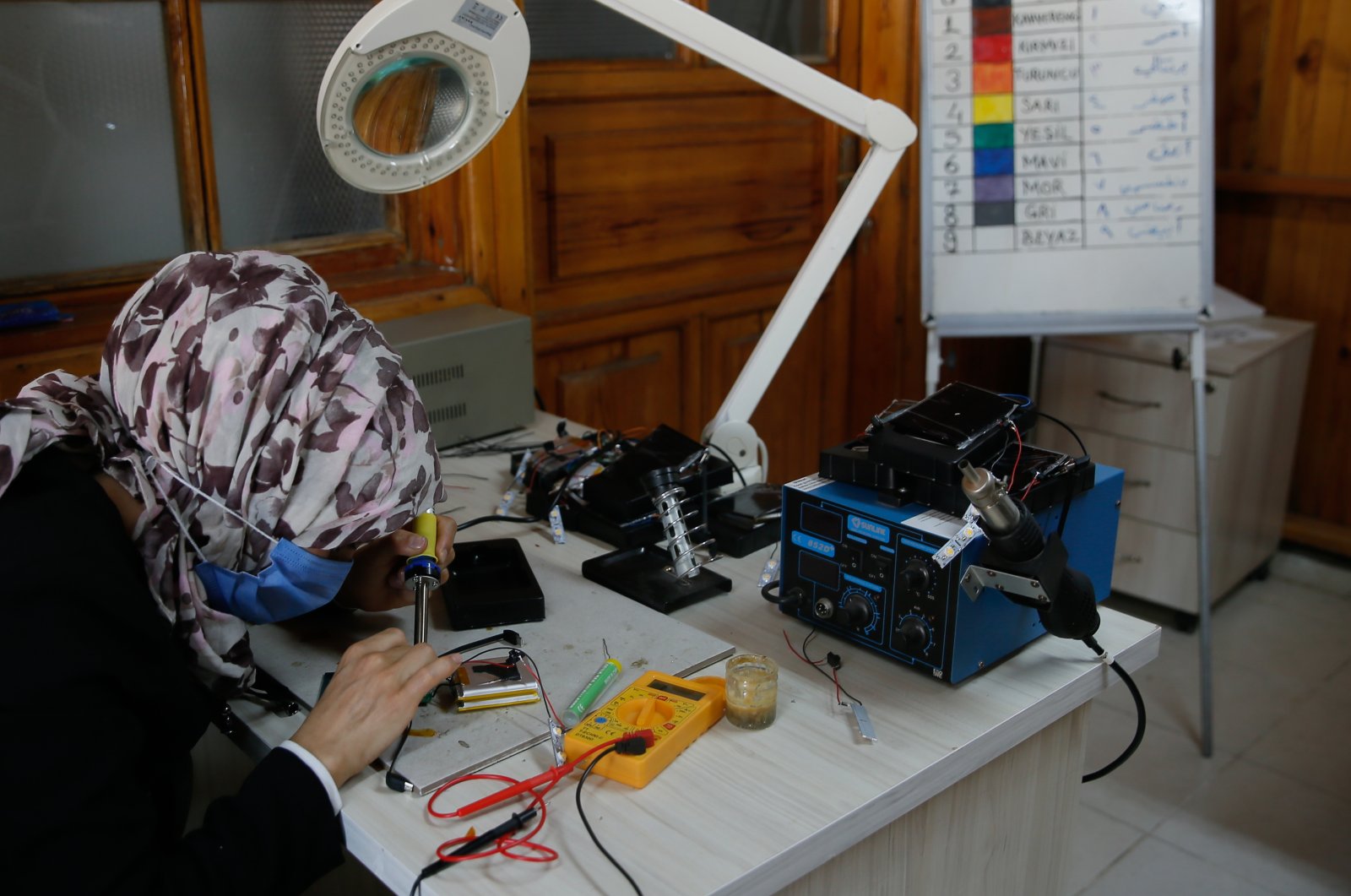 Some take sewing classes, others grow crops but a nonprofit organization in Turkey's western province of Izmir found a unique job opportunity for women who took shelter in Turkey after fleeing civil war in their homeland Syria. The "Solar Age" program by Imece Initiative teaches Syrian women how to produce solar-powered rechargeable power banks.

The project originally developed in 2018 to contribute to the diversification of resources in the face of climate change and environmental problems, while at the same time helping disadvantaged women in need of employment. Over the years, it transformed into a project that empowered Syrian women living in Turkey by providing them work to help them earn a livelihood.

Inspired by the Barefoot College of India, the program hosts Syrian women and their children at the village of Imece in Izmir's Çeşme district, from where many asylum-seekers try to make perilous journeys to cross into Europe. The trainers of the Imece Initiative provide courses in solar engineering, solar energy systems, and electrical engineering to Syrian women, while their children engage in educational play with international volunteers.

The project ultimately aims to teach Syrian women how to produce an Energy For Everyone or "EFE" device – a portable power bank made of waste wood that can be recharged through its solar panel or by standard plug-in power. The EFE also features two strong LED lights.

Vice director of the Imece Initiative Irem Somer told Anadolu Agency (AA) that the initiative was established in 2014 by a group of university students who wanted to support disadvantaged groups with the motto "empathy makes us human."

Çeşme has become a gateway from where almost 800,000 people tried to illegally cross into Greece in 2015. Somer explained that many who attempt to make these treacherous journeys could have been better helped if they were able to stay connected through charged mobile communication. This would have enabled mobile navigation to avoid risky routes, ensured that others know of their whereabouts, and diverted help where needed. These journeys were the inspiration behind the Solar Age Program which created the EFE device keeping these trips in mind, but its availability was soon extended to all users.

"We learned about the Barefoot College movement in India where they offer similar training to poor women living in rural communities to help them participate in sustainable solutions," Somer said. These women did not have the opportunity to go to school and Barefoot College began to train them worldwide as solar engineers, entrepreneurs and educators, she explained.

Many have benefited from the program that started with six female volunteers in 2017 who began transferring their experience and knowledge to Syrian women in Turkey. Ezgi Özcan is one such volunteer who initially received six months of training from Barefoot College in India and then became a Solar Age project trainer at the Imece Initiative to offer training to Syrian women on electricity and solar energy.

"In Syrian culture, women are mainly responsible for child care in families usually with many children. Therefore, we thought that we could help and empower them, providing them with a new line of work," Özcan stressed.

In 2018, 175 Syrian women received solar energy training, but the COVID-19 pandemic has restricted participants to only those living in Çeşme. "With the removal of lockdowns and restriction measures, we restarted our training one and a half months ago. So far, 250 Syrian women have completed our courses," she said.

Turkey hosts nearly 4 million refugees, including over 3.8 million Syrians, more than any other country in the world.