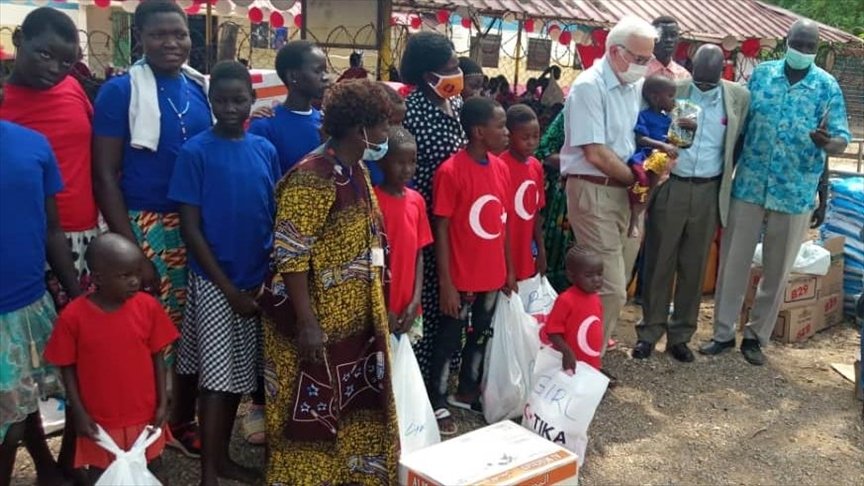 Alajabu, 10, lives at the Divine Mercy Orphanage located in the Gurei suburb of Juba, which recently received food and other aid from the Turkish Embassy.

He says the timely donations from the Turkish government have brought hope and relief as he will no longer go to bed hungry.

“I am grateful to the Turkish people for providing us with food since over the past months we did not get enough meals,” Alajabu said.

The donations were made to mark Turkey's National Sovereignty and Children’s Day, which falls on April 23.

John, a 15-year-old orphan, thanked the Turkish Embassy for the food donation and said they are "really suffering." He added that he would like to meet President Salva Kiir to inform him about their plight.

“We are children of South Sudan, we don’t know where our parents are apart from those who are taking care of us now,” said John.

“If I get a chance today to meet President Kiir, I would tell him to support all the orphanage centers across the country. We are really suffering, like now we are sleeping in tents and some orphans are sleeping in the streets,” he added.

John also said they lack clothes and sandals, leaving some of them to walk barefoot.

The orphanages also face a shortage of medicines for treating diseases like malaria.

“We survive on donations from friends and well-wishers to take care of the children,” said Father Paulino Tipo Deng, founder of Divine Mercy Orphanage Center.

Deng said some of the children in this center lost contact with their parents, while the caretakers of others are languishing in prisons.

He said the donation from the Turkish Embassy will help them run the orphanage, but he conceded that more support is needed to sustain the orphanage.

Helen Murshali Boro, director of the nonprofit organization Confident Children out of Conflict, hailed the Turkish government for supporting the orphanage.

“Now we will not be having any shortages of food and non-food items,” said Boro.

She said that the Turkish government has always supported their center with food and non-food items, which helps them take care of the children at the center.

Mutaf said it is very important to support the children because they are the future of the country.

"Children are our future and hope, investing in children means investing in our future. With these thoughts in mind, I wish a happy Children’s Day to all South Sudanese children, together with their Turkish friends,” said Mutaf.

South Sudan has been struggling to recover from five years of war that one study says killed almost 400,000 people.

Meanwhile, within the framework of Türkiye Scholarships, 140 South Sudanese students have been granted scholarships so far. In the 2019-2020 academic year, 26 students received a scholarship.

Bilateral relations have been developing between Turkey and South Sudan ever since.