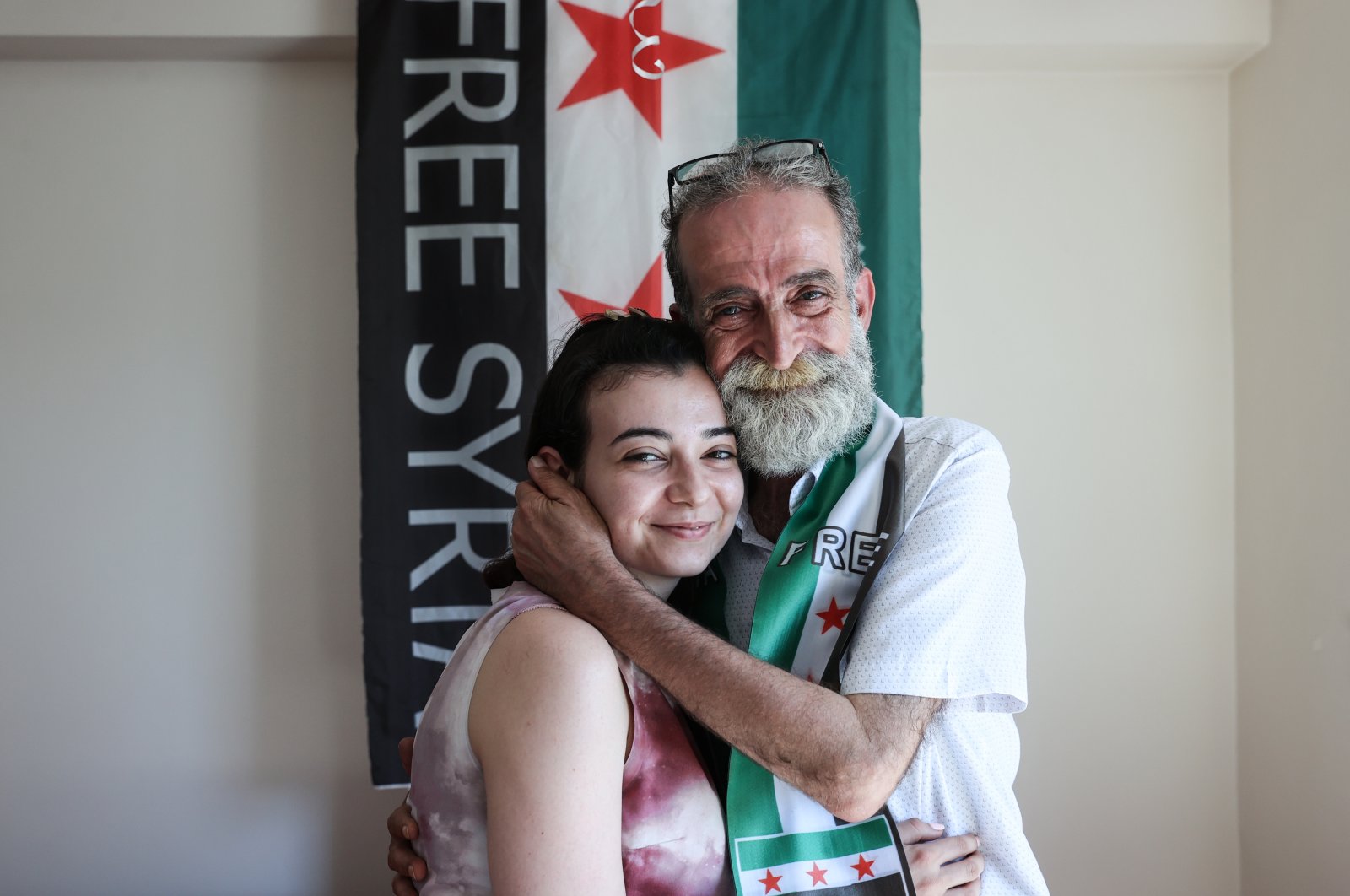 After a dozen years apart, a former prisoner of Syria's Assad regime and his daughter were reunited in Istanbul. The father and daughter recounted their years away from each other, and they hope to remain united in Turkey

A gaunt old man extends his arms in excitement as a young woman runs toward him just outside an airport terminal. This is a common scene in such places where people meet their loved ones, even after brief flights. But the story of Ammar Haidar and his daughter Marwa was different. This was their first meeting in 12 years. Haidar, with a "Free Syria" flag draped around his neck, tightly embraced his daughter, now 28, while Marwa burst into tears. Their video of reunion made rounds on social media last month but little was known about the father and daughter.

Haidar, a politician, was imprisoned by the Bashar Assad regime in 2009, before his reunion with Marwa in Istanbul. Born in Hama, Syria, Haidar, since his youth, has opposed the Assad family due to their anti-democratic practices.

He started his political activities in the early 1980s and was sentenced to prison many times over dissent. He was imprisoned for two years in 2009. Not satisfied with putting Haidar in jail, the Assad regime also put pressure on his daughter and wife. Haidar, who was a well-off contractor in Syria, sent his wife and daughter to Jordan due to this pressure. After he was released with the amnesty following the start of the civil war in Syria in 2011, Haidar decided to fight the Assad regime with other oppositionists in Syria instead of going back to his family. He continued his struggle until 2014 and was arrested again in the same year and imprisoned for a short time, and later went to Turkey in 2015 because Jordan did not accept political refugees.

His daughter Marwa had to go to Jordan with her mother when she was a 16-year-old high school student. After graduating from high school there, she studied graphic design at a private university but was forced to leave her education in her third year due to the deterioration of her father's financial situation. She worked various jobs to take care of her mother and make a living. She also drew graphic designs.

Although she and her father wanted to meet during this process, they could not get together due to various obstacles. A father living in Turkey and a daughter living in Lebanon had an opportunity to meet in Istanbul after 12 years. The Haidar family now wants to live together in Turkey, without falling apart again.

Speaking to Anadolu Agency (AA), Haidar said he attended a meeting in Lebanon in 2009 with many people from different countries but was detained after returning to Syria for speaking about human rights violations in his country. "I was in prison until 2011. After I was released in 2011, the war had started. All politicians were released as Assad issued a general amnesty. That's why I was released. All people started to oppose the Assad regime. I also took an active role there," he added.

Noting that he was arrested again in 2014, Haidar said he spent one month in prison. "This one month was the hardest. I have witnessed many prisons, but this time it was very bad. They tortured a lot. There were 17 people in a 2-meter (21.5-square foot) area. The toilet was in the same place. In a one-month period, three to four people were killed in front of my eyes every day."

Haidar said the people working in prison "were not normal people." "Even the regime couldn't control them. They were very cruel people. After one month, my health condition deteriorated too much and with a little luck I was able to get out," he said.

Later, Haidar moved to Lebanon. "When I went there, I hoped that I could fight more, but the conditions were bad in Lebanon as well. Hezbollah was doing a lot of harm to the Syrian people. There was a lot of discrimination and I faced a lot of pressure. I stayed in Lebanon for one year," he added. Haidar went on to say that he wanted to cross to Europe from Turkey as well, and, although he tried 12 times, he did not succeed, and was caught and sent back by Greece each time he tried.

Haidar said he had not seen his wife and daughter since he was imprisoned in 2009. "When I was imprisoned, I couldn't even communicate with them for a long time. Then I had a chance to talk to my family and asked them to go to Jordan. My family was also oppressed by Assad. They were also in a very bad state psychologically," he said. Haidar also stressed that since that time he has only spoken to his family over the phone. "This moment of reunion has been in my mind for 12 years. I used to dream of this meeting before I went to bed (all those years)."

Marwa said she missed her father very much, adding that it was very difficult to live without a father in a foreign country, and her only consolation was the hope of seeing him again. "For 12 years I lived with the dream of seeing my father (again) ... I used to feel upset seeing children walking with their fathers," she said.

"When I saw my father at the airport gate, I hugged him tightly. I looked away and hugged him again. This was my father and he was in good health. I looked, hugged again and again. It took me a while to believe that," Marwa added.