This is how SOLOTÜRK, architect of daredevil airshows, prepares 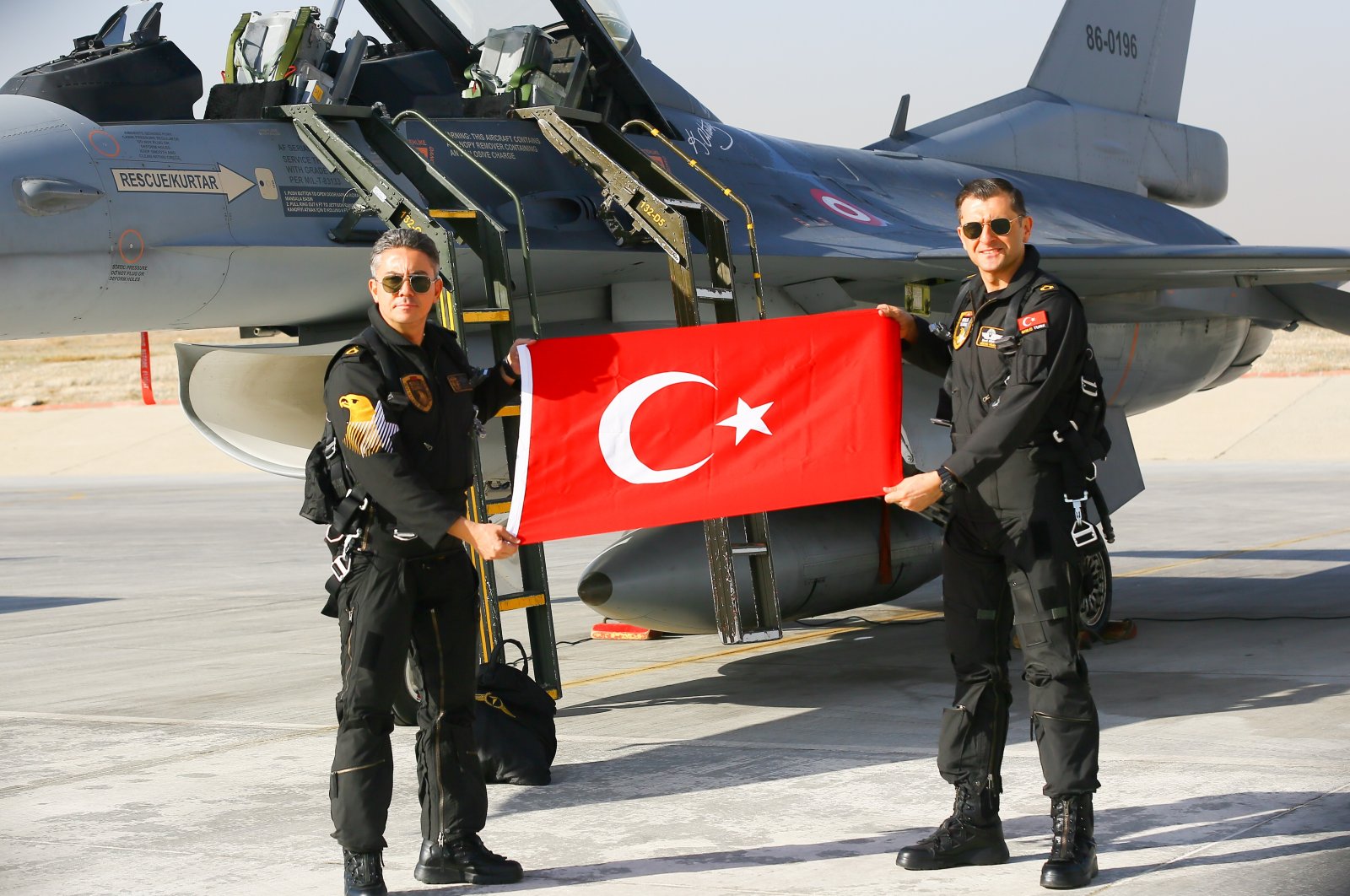 SOLOTÜRK has conducted well over 200 flights in 17 different countries in its 10-year history, passing into the literature with maneuvers unique to SOLOTÜRK and others that aerobatics teams from other countries\' air forces find \'impossible\' to do

SOLOTÜRK, the F-16 demonstration team of the Turkish Air Forces Command, has recently opened their doors to reveal how they are getting ready for breathtaking performances ongoing for the last decade.

The SOLOTÜRK aerial acrobatics team performs its daredevil aerobatics with specially modified F-16 fighter jets and had its first show in 2011 as part of the 100th-anniversary events of the Air Forces Command. Over the past 10 years, the SOLOTÜRK team has carried out 217 demonstration flights.

Combat pilots in the air force can become a SOLOTÜRK pilot voluntarily after the training they receive. The pilots of the SOLOTÜRK team still continue to play an active role in military operations as well as their demonstration flights, hitting targets with pinpoint accuracy as soon as the order comes. The SOLOTÜRK team successfully conducts exhibition flights at home and abroad with pilots Maj. Emre Mert, Maj. Murat Bakıcı and the voice of SOLOTÜRK, Capt. Bircan Biçer.

Maj. Mert noted that the team used used an F-16 aircraft during the establishment of SOLOTÜRK, with all the paints and designs on this F-16 aircraft belonging to the team.

"Apart from that, we created a package. We figured out all the maneuvers involved in this show package ourselves. Among them, there are maneuvers such as the SOLOTÜRK aileron roll, reverse take-off, bowing and slow flight, which have entered the world literature. In summary, we can say that SOLOTÜRK emerged as a synthesis of the knowledge and experience of the Turkish Air Forces Command over the years."

Maj. Mert stated that there is approximately three months of training to become a SOLOTÜRK pilot and the number of sorties to be flown within this training is specifically prescribed. The major underlined that they continue to fly one or two sorties every week to stay warmed-up at all times and said: “Of course, our rehearsals take place before the demonstration flights. We try to bring out the best result by doing brain gymnastics such as 'Which movements will we do in which order, how can we get more effect with which music production'.

"Apart from that, we first conduct an environmental survey of the show area. If there are any dangerous areas that will affect us, we check them and then do our demonstration flight. It is a long process, the result is a 20-minute airshow watched by our people but its preparation takes quite a long time."

Emphasizing that every flight is very important to them and that they experience the pride of waving the crescent and star flag under their aircraft on every flight, Maj. Mert further explained: "All pilots in the Turkish air force are the same. We are people who love and are in love with flying. So, there is no difference. But of course, if we think of it as an exhibition, we are representing the Republic of Turkey abroad. We are waving the crescent and star flag under our plane, in the sky and trying to attract people's reactions and attention. Therefore, the flights have a different meaning of course.

"I enjoy our performances on our national holidays, on our national days, when we unite with our people. Of course, besides SOLOTÜRK, we have an operational mission side. In this context, frankly, I take the same pleasure in all the missions that can be flown for my country and nation."

Touching on the fact that SOLOTÜRK brought many new maneuvers to international flight literature, Maj. Mert said that the maneuver he liked the most is the slow flight maneuver.

"While doing that move, we also developed the 'cobra' move, which is a move that the F-16 can't quite do. In other words, at that first entry moment, you see the F-16 rearing at a low speed. Therefore, about 100 knots, we reduce it to 95 knots. F-16 demonstration teams of other countries can reduce this slow flight to only 120 knots. But we, as Turkish pilots, can reduce them up to 100 knots and 95 knots with our training.

"Of course, in this position, since the flow is slower, I can see the energy of our people and the sparkle in their eyes more clearly. In other movements, when we pass at a high speed of 1,000 kph (621.37 mph), the event flows fast. We don't see much. That's why I like the slow flight movement so much," he said.

Maj. Bakıcı, who was included in the SOLOTÜRK team to replace Capt. Serdar Doğan this year, described the qualifications required to become a SOLOTÜRK pilot: "To be a SOLOTÜRK pilot, of course, one must first be an F-16 pilot and have a certain amount of experience. Our books and guidelines state this experience as 1,000 hours of flying. However, Maj. Mert and I both have more than 3,500 hours of F-16 experience. Other than that, you have to volunteer because the task you have undertaken is a very difficult task indeed. In addition, you should not have a flight incident where you experience any flight insecurity or crash."

Underlining that each of their flights has a different importance and pleasure for them, Maj. Bakıcı said: "Being an airplane pilot means getting married to the sky and an airplane. We had our first wedding with our airplane and we had it in the sky. Therefore, all our flights are very enjoyable for us. However, the moral pleasure and moral satisfaction of operational missions is greater. Therefore, I cannot describe the pleasure I get while flying on operational missions."

Noting that SOLOTÜRK has unique maneuvers, Maj. Bakıcı said: "My favorite move among SOLOTÜRK's maneuvers is the 'reverse take-off,' which bears SOLOTÜRK's signature. As the adrenaline kicks in, it rises to the highest level. At that time, you experience the pleasure of flying at the highest level.

"Let me explain the reverse take-off as follows: During take-off, we continue to take off at altitudes very close to the ground, at heights of 10 feet (3 meters), in such a way that we turn the airplane upside down and climb upside down. Close to the ground and at low altitudes, it is more difficult for the airplane to hold on at low speeds. This raises the risk even more. But we do this safely thanks to the training we have received."

Capt. Bircan Biçer, the voice of SOLOTÜRK who enthusiastically explains the maneuvers to the audience in the exhibition areas, spoke about SOLOTÜRK's achievements over the last 10 years. "With our exhibition flight that is praised around the world, in 2011, the first year of our establishment, we were named the team with the ‘best flight show’ out of the 29 teams in Fairford, England.

"Following that, we were awarded the 'best show flight' award at SIAF 2017 held in Slovakia and awarded the 'best solo jet show' award among 32 teams in RIAT 2018 England, one of the most prestigious air shows in the world. Our flight choreography is admired in every country we go to. Spectators are not just interested in our flights but many visitors and photographers flock to the area where our plane is parked," he explained.

Capt. Biçer said that during SOLOTÜRK's 10-year history, the team performed in 17 different countries in addition to many provinces and districts in Turkey.

The captain further said that SOLOTÜRK had many projects for its 10th anniversary, but they could not realize them due the pandemic. "But I hope we will do this better in the future and we will appear in front of our people with better demonstrations.

"SOLOTÜRK has completed approximately 217 flights in its 10-year history so far. This is not an easy achievement. Because although nearly 150 of these demonstrations were in the country, nearly 67 of them were held abroad. When you divide it into 10 years, it corresponds to approximately 21 shows per year; this turns out to be a great success when we divide it into weeks," Capt. Biçer explained.