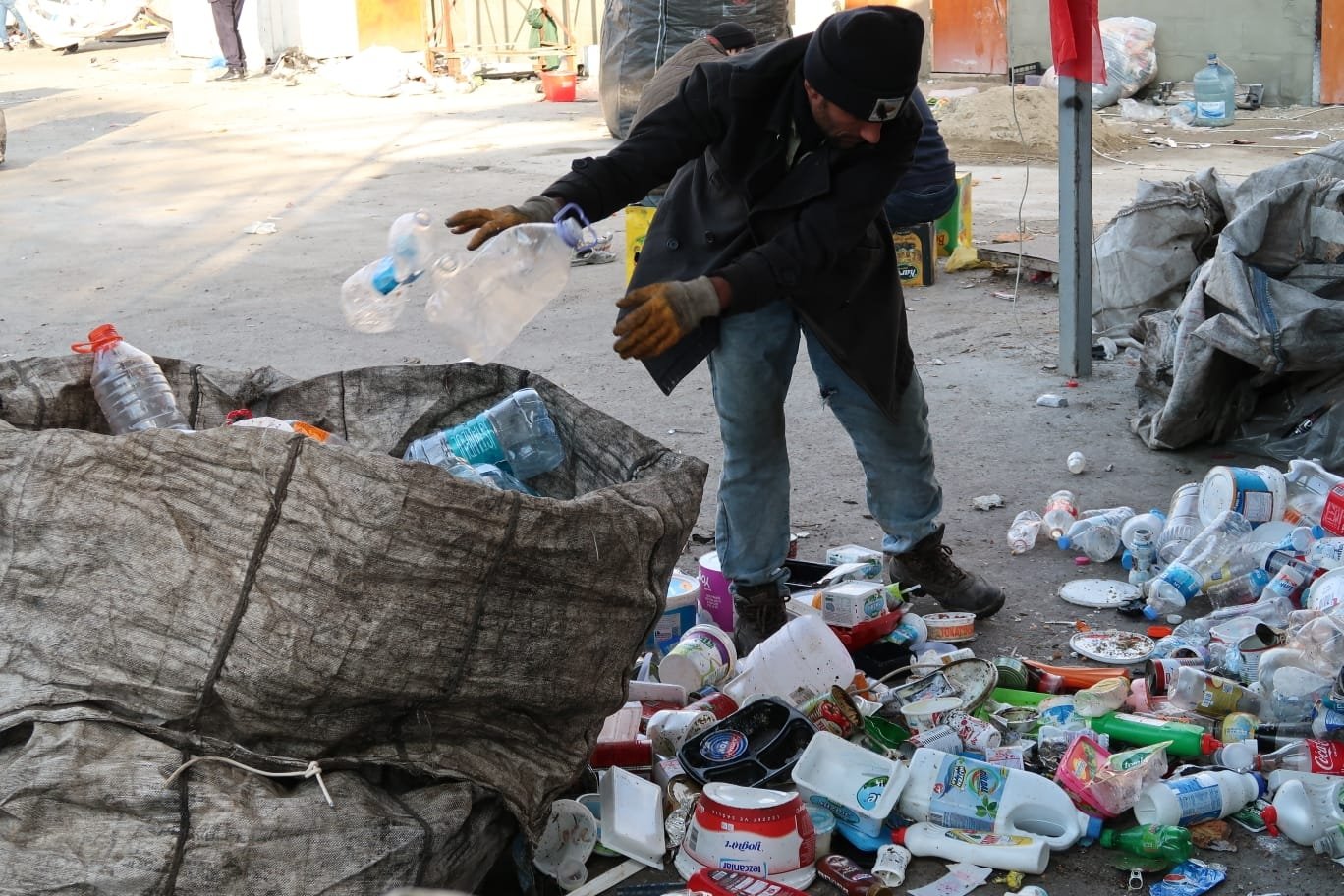 A staple of streets across Turkey with their makeshift carts, trash collectors keep the nation's recycling efforts going and contribute to its zero waste goal, in a country where sorting trash and properly disposing of it is a relatively new concept

Recycling everything that can be is essential in Turkey's fight against the climate crisis and helping the economy. As the public continues to get accustomed to sorting their trash for recycling, a profession thrives: trash collection. Collectors are a common sight on busy streets and back alleys. Amid bustling city life, they quietly pursue a livelihood for themselves while boosting the recycling rate on the side.

Starting before dawn, they rush to the dumpsters, before municipality garbage crews start their tours emptying them. Looking for any piece of waste that can be recycled, from milk cartons to plastic bottles, collectors fill their carts made of discarded large sacks. At the end of the day, they head to depots in city suburbs to dump their findings. From there, the waste is transferred to factories where they are recycled to find a new use in daily life.

Collectors serve as "middlemen" in Turkey's zero waste efforts, which began a new chapter with the landmark Zero Waste Project initiated by first lady Emine Erdoğan in 2017. The project, which gained momentum over the past five years, will be further expanded under new regulations that require all buildings to have separate bins for plastic, glass, paper and other types of waste. Still, collectors are doing a crucial job by sorting the garbage randomly discarded in dumpsters on the streets.

Mahmut Alper is new to the growing army of trash collectors. The 25-year-old arrived in Istanbul two months ago from the southeastern province of Mardin. Not formally educated and with no other job prospects, Alper started collecting garbage to make a living for his family. His shift starts at 6 a.m. and sometimes, he works until 8 p.m. in the evening. "I collect everything, plastics, tin cans, everything I can find. I feel like I am giving new life to the garbage," he said, as he makes his rounds in Bahçelievler, a crowded suburb of Istanbul. Rainfall, a pesky situation for other residents of the Turkish metropolis, is good news for Alper. "I have less competition then," he jokes. Pacing the streets for hours, Alper found a way to counter distractions: headphones he rarely removes from his ears. Every day, he walks for about 30 kilometers (nearly 19 miles) collecting an average of 250 kilograms (around 550 pounds) of recyclable items. He earns $86 (TL 1,200) a week. "I exert labor for my job and at least, I don't go around begging for money," he said.

Mehmed Vali traveled from farther than Alper. The 19-year-old Afghan man arrived in Turkey on foot and still walks, this time for his job. Vali had joined his compatriots seeking a better life abroad and arrived in Turkey a few months ago, after walking for 35 days. After working odd jobs, he found his new occupation thanks to fellow collectors from Afghanistan. He said he is proud to earn money to send back home to his family of eight. "My father works as a shepherd in Afghanistan and I send all the money I earn here every week," Vali, who stays in a makeshift shed provided by the owners of the depot where he sells the trash he collects, said.

Volkan Çiltaş runs one of many depots across Istanbul where recycled items are taken before processing. Hailing from a family that specialized in garbage collection, Çiltaş said things have changed a lot since the time of his grandfather, who also worked as a trash collector. "In the past, garbage was collected in one place, in landfills, and people used to work there to find recyclable items. Now there are dumpsters everywhere," he said. Çiltaş explained trash collection provides a livelihood to hundreds of thousands of people who work strenuously, be it winter or summer. He points out that people have a prejudice against collectors who are believed to do certain illegal jobs. "Of course, we do not want to be viewed in such a way and we ask authorities to give us a proper license for this job and tax our income," he said. Indeed, the trash collection business is largely unregistered, though it generates income for a large number of people.

Erhan Han, who has been working as a trash collector for the past two decades in Istanbul's Gaziosmanpaşa, said they want their job to be defined as a legal profession under Turkish laws. A father of two, Han found himself in the business when he lost his former job as a factory worker after the 2001 economic crisis in Turkey. Han earns money for both his family and his mother who is confined to her bed, and is proud to be able to send his children to university with money he earned from collecting trash. Han said he collects about 2.5 tons of waste daily.

Ahmet Göğümen is among the youngest trash collectors. The 14-year-old boy had to drop out of school to take care of his seven siblings. Despite the challenging nature of the job, which requires him to wake up early every day, the young boy with an ever-smiling face remains undaunted. "I like this job and am never ashamed of it. The only thing I miss is a long sleep," said Göğümen, who works more than 12 hours and walks around 50 kilometers daily. He said municipal officials known as zabıta, who are in charge of inspecting unlicensed vendors and other people working on the streets, used to disperse them in the past but they are more understanding nowadays. "We are not doing something bad. We don't pollute the environment, on the contrary, we clean it," he said.

Şükrü Kanat is among the young collectors. The 17-year-old boy who arrived from Şanlıurfa to Istanbul one month ago said he earns about $50 (TL 700) a week. "This is a very difficult job and in winter, I feel like my hands are freezing," he explained. "But sometimes I find beautiful things among the garbage. I found a pair of shoes today and will give them to my brother," he proudly said.