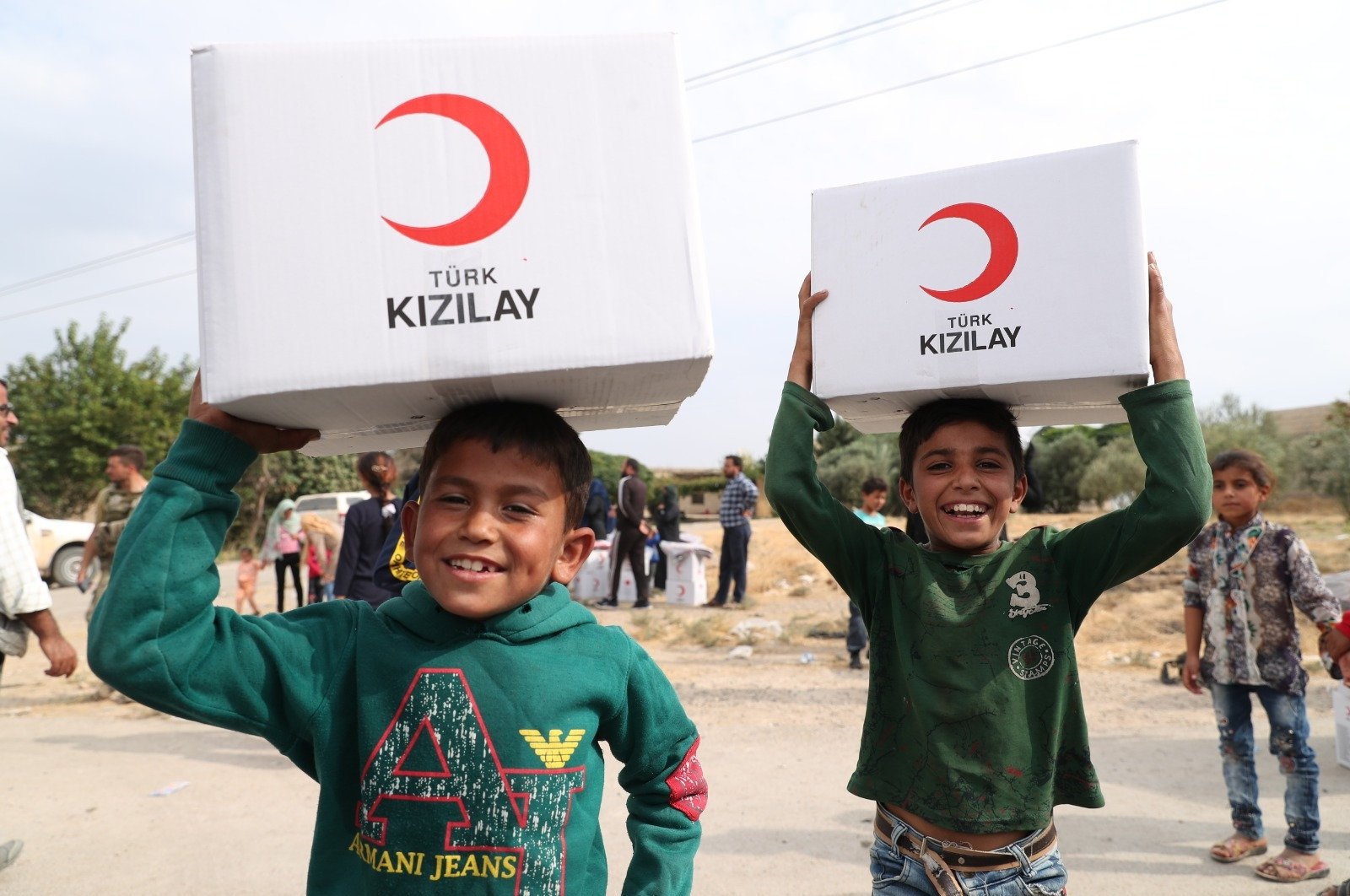 Turkey accounted for more than one-fourth of all global humanitarian aid in 2019, according to an international nongovernmental organization, as the country aspires to be a leader in global aid efforts

It became the country with the most spent on humanitarian assistance for three years dating to 2017, according to the Development Initiative's (DI) Global Humanitarian Assistance Report. It spent $7.6 billion (TL 52 billion) in humanitarian assistance last year, while global humanitarian aid totaled $29.6 billion in 2019, down from $31.2 billion in 2018. Following Turkey was the U.S. with $7 billion, Germany at $3.3 billion, the U.K. with $3.1 billion and Saudi Arabia at $1.4 billion. Turkey's humanitarian aid expenditures were nearly 0.84% of gross domestic product (GDP), while the U.S. provided 0.03%, Germany 0.08%, the U.K. 0.11% and Saudi Arabia 0.18%.

Turkey ranked third on the DI report in 2013, 2014 and 2015 and second in 2016. It also hosts the highest number of refugees in the world at nearly 4 million, according to official figures. The number of Syrian refugees living in Turkey was 3.6 million as of May. Last year, the number of displaced people increased to 79.5 million, increasing 8% or 6.1 million on a yearly basis, the report showed. Some $23.1 billion in humanitarian assistance was provided by governments and European Union institutions while the remainder was given by private donors. Private donors included individuals, trusts, foundations, companies and national societies.

The report noted that most aid went to Yemen ($5 billion), Syria ($2.3 billion), Iraq ($1.3 billion), South Sudan and Palestine ($0.8 billion each). While humanitarian aid to Yemen increased by 145% year-on-year in 2019, it decreased in the other four countries. Multilateral organizations transported $15.6 billion in aid, while $4.1 billion went through nongovernmental organizations (NGOs) and $3.1 billion through the International Red Cross and Red Crescent movements.

Mevlüt Yurtseven, the head of the Alliance of International Doctors (AID), said Turkey provides humanitarian aid above its capacity. He noted relief works are part of international policies, and countries that are active in this area would come to the forefront in the global arena. Touching on decreasing humanitarian aid, he warned that relief works may decrease much more this year and in the coming years because of the coronavirus pandemic. "After the pandemic period, governments will reduce the share of the aid in their budgets and relief works will be limited," he said. Yemen currently faces hot conflicts and needs help to recover from the crisis, he said. AID is active in countries in need of humanitarian aid, especially operating medical assistance.

Rıdvan Kaya, the chair of the Free Thought and Educational Rights Society (Özgür-Der), said Turkey's humanitarian assistance in recent years is a result of its sensitivity to regional and global issues. Özgür-Der carries out humanitarian aid activities especially in Syria by transporting material to conflict zones and building temporary houses for displaced people.

Turkey's sense of responsibility for the world and Islamic countries turned into a recent aid mobilization effort. "It is not an easy task for long-term relief activities, economic difficulties may decrease donations and negative views from conflict zones can also result in a decrease in people's sensitivity to aid," Kaya underlined. It is gratifying that the misery of Yemen has finally come to an agenda after long indifference to the enormous troubles in the country, he stressed. People, who suffer from hunger, distress and misery around the world, unfortunately, do not make it to the global agenda, he said. He also said some countries, such as Russia and China, use humanitarian aid operations as a weapon.

Russia and China vetoed a draft resolution at the U.N. Security Council earlier this month that would have allowed international assistance to Syria to continue for six additional months through the Öncüpınar and Cilvegözü border gates in Turkey. After the decision, border gates were closed to international humanitarian aid.

State-run agencies and charities led the efforts, either by reaching out to desperate Syrians displaced by civil war in Turkey’s southern neighbor or to victims of earthquakes and floods around the world. From the Turkish Red Crescent to Disaster and Emergency Management Authority (AFAD), Turkey has been at the forefront of offering direct assistance to those in need.

The country has been juggling these responsibilities while succeeding in achieving its aspirations for economic growth, aiming to enter the league of developed countries after having recovered from years of economic mismanagement. Under the Justice and Development Party's (AK Party) tenure, humanitarian assistance efforts have gained momentum and the country's aid agencies have gained prominence by offering assistance in disasters and in order to assist refugees.