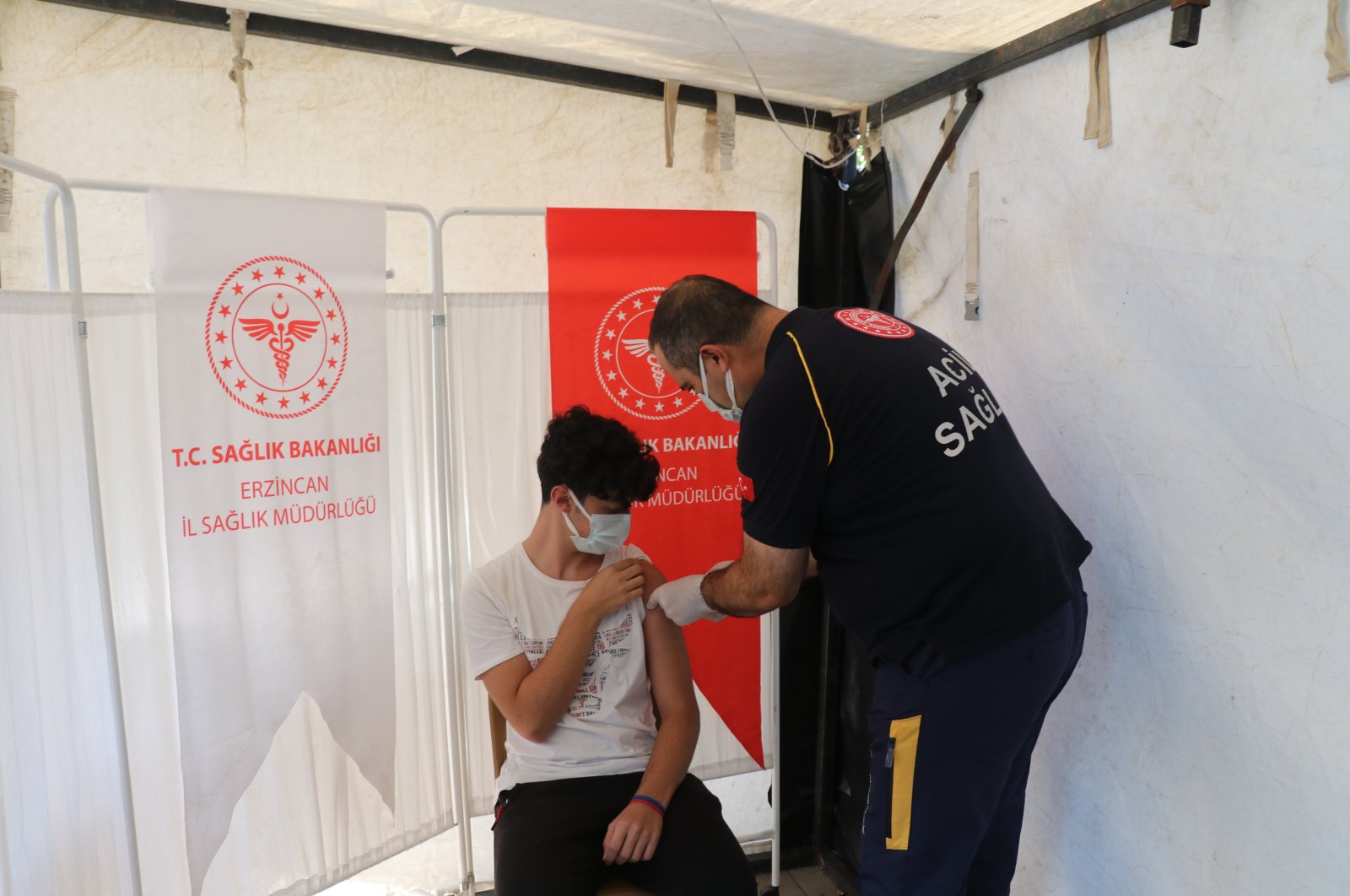 More provinces are being added to the 'blue' category, representing low risk in the Health Ministry’s COVID-19 map, as Turkey may surpass 70% vaccination rate for all 81 provinces by late September

The risk is here, but so is the opportunity to eliminate it.

With the COVID-19 pandemic prevailing and claiming more lives day by day, Turkey may have a few more weeks to mitigate the impact of the disease, the Sabah newspaper reported on Tuesday. The ongoing vaccination program is the best weapon in the country’s arsenal against the pandemic, which has claimed more than 52,000 lives in a little over a year. The program divides the country into four color codes based on COVID-19 risk, with blue assigned to low-risk provinces. As the number of people with both doses of the vaccine now exceeds 36 million, more among the 81 provinces are expected to be downgraded in terms of risk.

Nineteen more provinces are closes to reaching the goal of a vaccination rate above 70% within the next two weeks, and their color code on the Health Ministry’s risk map is set to turn to “blue” from “yellow,” or medium risk. Thus, the number of provinces in the blue category will reach 65. Four provinces in the "orange," or high-risk category – Bingöl, Bayburt, Muş and Batman – are close to the 65% vaccination rate goal. Overall, only five provinces – Şanlıurfa, Diyarbakır, Mardin, Bitlis and Gümüşhane – will remain in the high-risk category. Şanlıurfa was the only province in the "red," or very high-risk category, up until last week.

Professor Deniz Odabaş, a member of the Health Ministry’s Coronavirus Scientific Advisory Board, says they managed to complete the first chapter in the vaccination program (with a first-dose vaccination rate exceeding 77%) but emphasized that one dose of vaccine was not enough to protect the public. “We will have a high rate of protection only when 70% of the population receives both doses of vaccine,” Odabaş told the Sabah newspaper. Currently, this rate is at around 59%.

“People should not postpone their second doses. Those who live in provinces with vaccination rates at above 75% should not drop their guard and neglect vaccines, thinking they would not be affected since others are vaccinated,” she warned.

Odabaş said Turkey ranked fifth in the world in vaccination rate among countries that have not produced their own vaccines yet. “Countries like Australia and New Zealand had problems in access to vaccines, but Turkey overcame this challenge. We managed to tackle the first chapter and now we must focus on the second one,” she added.

The delta variant accounts for some 90% of cases in Turkey, and the majority of those are among the unvaccinated, according to figures supplied by hospitals. Professor Ismail Balık, head of the Department of Infectious Diseases at Ankara University Faculty of Medicine, says the hospitalization rate among people with two doses of vaccine but infected anyway "dropped by 93%."

"It prevents deaths almost 100%," he told Demirören News Agency (DHA) on Tuesday. "No vaccine available in the world now is designed to totally prevent a virus. They are designed to prevent fatalities from the virus and severe cases. Turkey has almost achieved the desired level in one-dose vaccination, but bear in mind that one dose is not very effective against the delta variant. Even if you have two doses, you should proceed with caution still and continue wearing protective masks and adhere to social distancing (in crowded places)."

Health Minister Fahrettin Koca often shares on his social media account the stories of unvaccinated people who end up in the hospital for COVID-19. Media outlets also repeatedly circulate the interviews with unvaccinated coronavirus patients in a bid to promote vaccination in the country.

Rahime Çelti is among those who found herself at the hospital with a severe case of coronavirus. The 75-year-old woman living in Şanlıurfa talked about how she regrets not getting vaccinated. "I have been trying to breathe for the past 20 days," she said from her bed at Harran University Hospital in the province.

She credits the "great" efforts of health care staff with her transfer from intensive care to a COVID-19 ward for patients with less severe cases. "Go get your jab. I did not and suffered. I will have my vaccines as soon as I leave the hospital," she told Anadolu Agency (AA) on Tuesday.

Yasin Beyaz, 22, was infected while accompanying his uncle who was hospitalized for surgery at the same hospital. He had his first dose but skipped the second one. "I had my first dose some fifty days before infection. I thought I would be safe because of my age. But I spent 20 days in intensive care. It was the worst. I could not breathe. I was hooked up to an oxygen device and whenever I turned it off, I would go into a long fit of cough. This was no ordinary cough and I felt like I was dying," he recalled his battle with the disease.

"Don't think that one dose will protect you. I pity every day I neglected having my second dose. It was a great mistake. I am now ready to even have two more doses," he said.