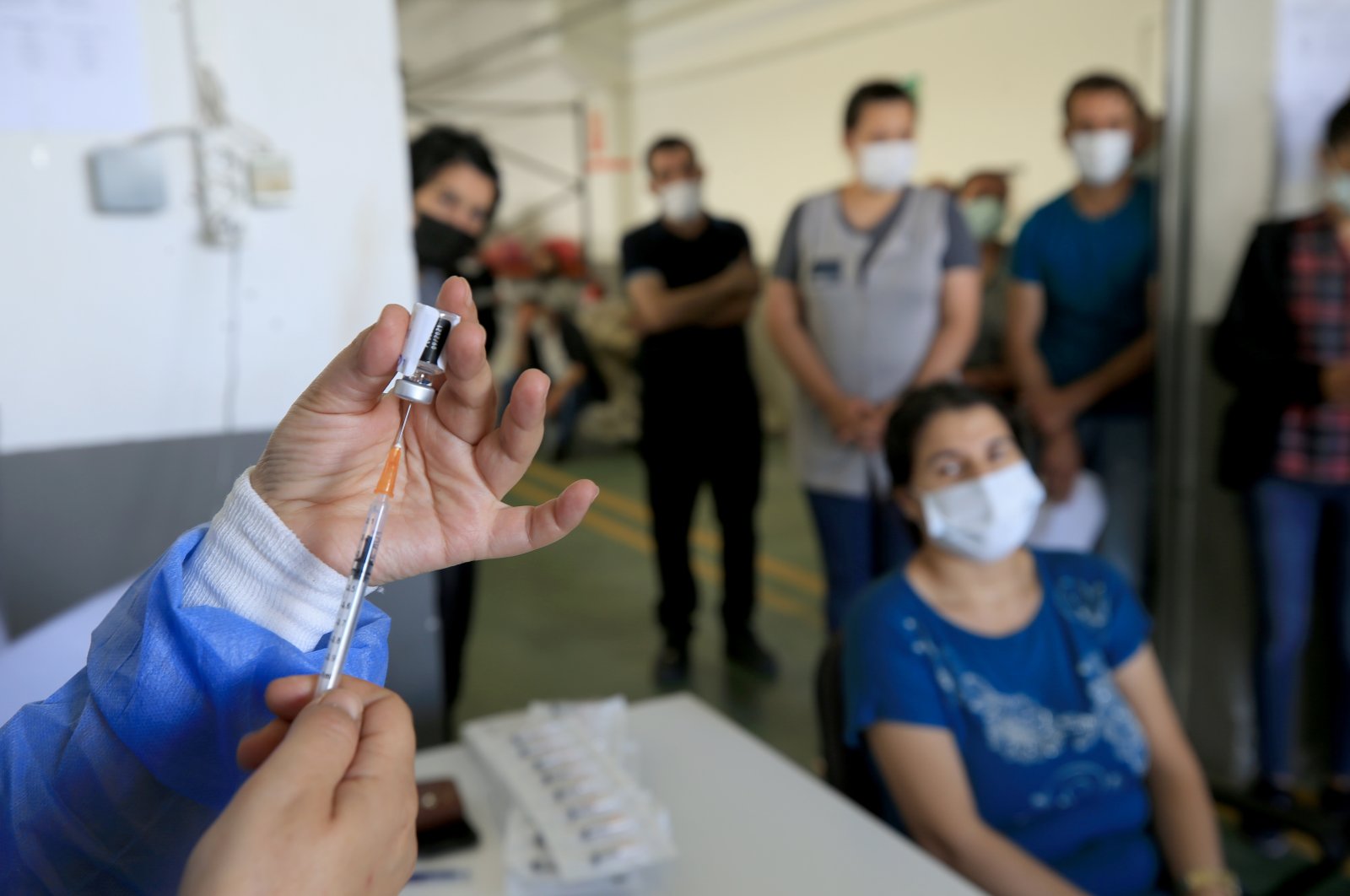 Turkey on Tuesday reached 1.2 million doses in daily vaccinations against COVID-19 while Health Ministry announced on Wednesday that citizens can now have same-day appointment and inoculation

Turkish hospitals and clinics are seeing crowds of people this week, in numbers unprecedented since the early days of the coronavirus pandemic. But unlike those days, people are here to receive vaccinations, rather than to be hospitalized.

On Tuesday, the country broke the single-day record for the highest number of vaccinations at 1.24 million. The tremendous interest is the result of the start of vaccination for more eligible groups, one of the biggest among them being workers and civil servants with social security who were included in the campaign Monday.

Increased availability of vaccines also played a role in the long lines outside the vaccination spots, which now include tents set up at central locations in some cities.

Last month, the country finalized a deal with Pfizer-BioNTech for 90 million doses of their vaccine, with an option for an additional 30 million jabs. CoronaVac, an inactive vaccine developed by China’s Sinovac, is also available to the citizens.

The new doses give a much-needed boost to a country that has lost more than 48,000 people to the pandemic since March 2020. They have apparently allowed the Health Ministry to expand its vaccination campaign which, for a long time, was organized on the basis of age. Currently, people age 40 and above are also eligible for shots, even if they are not in groups prioritized by the Health Ministry.

The ministry also started on-site vaccination for people working in industrial zones, in a bid to keep businesses running without disruption.

Mobile vaccination units are already inoculating eligible people in rural areas with limited access to hospitals while seasonal laborers are being given jabs in the places they work. Health care crews also visit the homes of people hesitating to get vaccinated to convince them and, occasionally, inject them if they agree to get their jabs.

Istanbul, the country’s most populous city, leads in vaccination with more than 6.3 million doses administered so far. A brief rainfall in the early hours of Wednesday did not deter people lining up outside Professor Cemil Taşçıoğlu City Hospital in Istanbul. The crowd, striving to maintain social distancing, patiently waited for their jabs.

"I am grateful to have received my shot. The summer is here and I hope the pandemic (restrictions) will be eased further. We were very frustrated but now we have had our shots," Ekrem Gültekin, who got vaccinated at the hospital, told Demirören News Agency (DHA). Gültekin said he had his appointment on Tuesday at 10:20 a.m. and did not experience any delay.

The hospital's deputy chief physician İsmail Koyutürk said the interest was huge, especially after the inclusion of people with social security, "some 21 million people across the country."

He said they had put all measures in place to respond to the growing demand. "We had already finished our preparations two weeks ago for newcomers to vaccination groups and doubled our staff capacity and vaccination sites. Today, we have 5,000 appointments but we can offer jabs for 2,000 more. I call on everyone to come to get their shots. This is our only option in the fight against the pandemic," he added.

More people are expected to be included in the campaign in the coming days after the arrival of Sputnik V vaccine developed in Russia. The first batch of vaccines arrived last week after an early emergency approval for use by the Health Ministry. The vaccine is expected to be available for public use within two weeks following additional safety tests.

Savaşçı told DHA that the vaccine, available in 65 countries, had a high rate of creating antibodies to fight the infections.

"It works with adenovirus, a 'carrier' virus, and triggers a mechanism to create antibodies. Sputnik is based on a technology already in use for vaccines for other diseases. People should not be worried that it contains a 'virus.' This is only a carrier and cannot cause sickness in people who are administered jabs," Savaşçı, who had volunteered for the Pfizer-BioNTech vaccine trials, said.