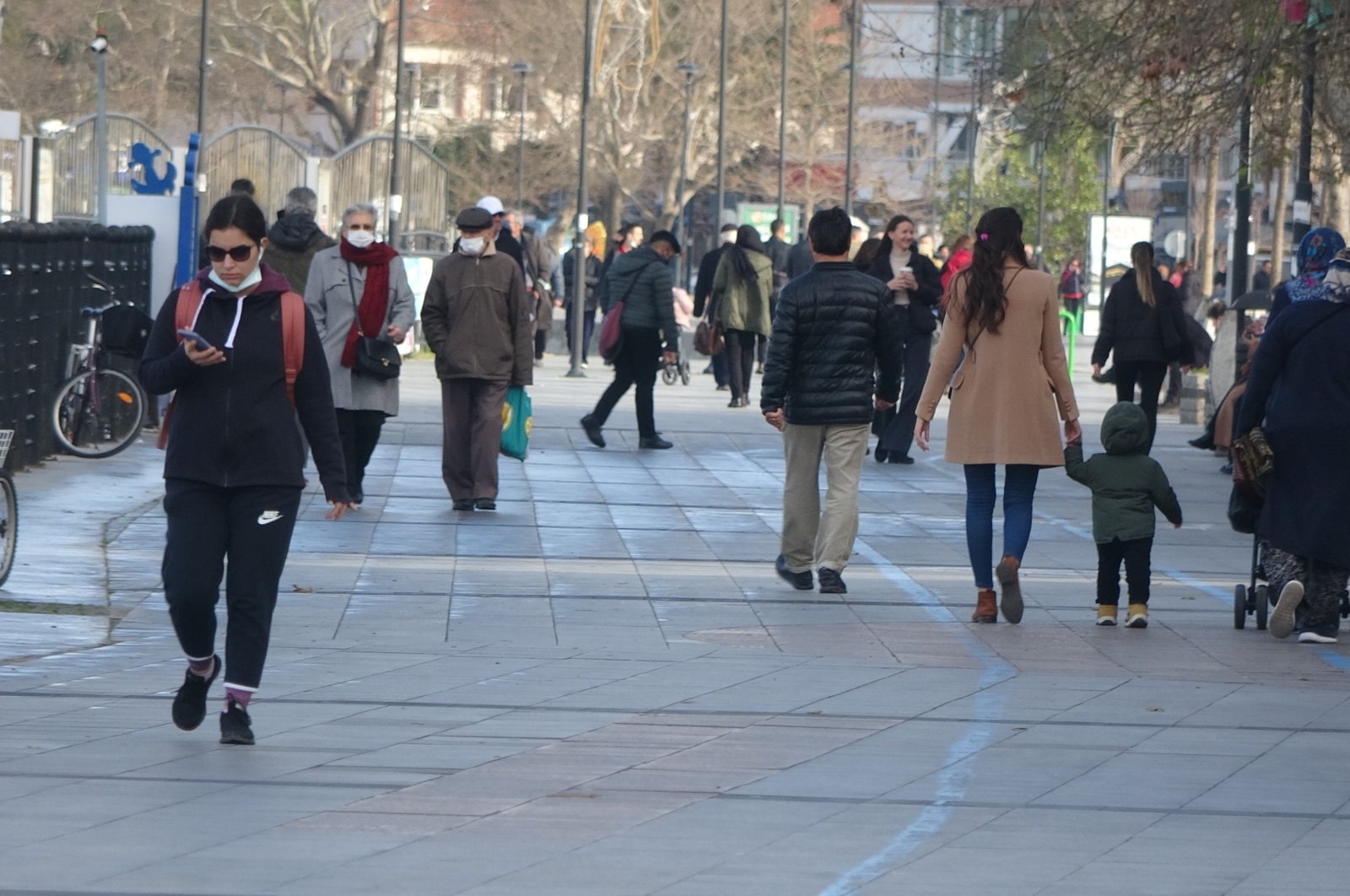 People with and without protective face masks walk on a street in Çanakkale, western Turkey, Dec. 27, 2021. (IHA PHOTO)
by DAILY SABAH WITH AGENCIES Dec 28, 2021 9:14 am
RECOMMENDED

The Health Ministry announced that the rate of the COVID-19 omicron variant in Turkey was not 42%, as claimed by some media outlets, and listed the provinces with confirmed cases so far. In fact, Health Minister Fahrettin Koca had declared earlier that the fast-spreading variant accounted for more than 10% of the cases.

The media reports were based on statistics from a website that publishes data supplied by Germany-based Global Initiative On Sharing All Influenza Data (GISAID). The Health Ministry said the website acknowledged the mistake and updated the numbers. The ministry's statement said that since Dec. 1, among 3,344 samples from COVID-19 patients, 3,073 were the delta variant, while 42 were the omicron variant. Istanbul had 30 and Izmir had six omicron cases based on the analysis results, while Şırnak and Diyarbakır had one case each, and Isparta and Kütahya had two cases each.

Turkey is on alert against the variant, which it first reported on Dec. 11. It is unclear whether the variant is to blame for a sudden surge in the number of daily cases, up by 30% on Monday from around 20,000 to 26,099. Fatalities, on the other hand, remain below 200, dropping to 157 from 173 on Sunday. The country is counting on its nationwide vaccination program to stave off the variant's impact, which forced it to ban flights to some countries with clusters of omicron cases. Last week, the domestically developed COVID-19 vaccine, Turkovac, received emergency use authorization from Turkish authorities.

Turkey has already administered more than 129 million doses of vaccines using shots developed by China's Sinovac and by Pfizer-BioNTech. Experts have repeatedly warned the public to get vaccinated and adhere to measures including mandatory protective masks, social distancing and hygiene. The country removed almost all restrictions related to the pandemic last summer but the upcoming New Year's events, when crowds typically gather for celebrations, raise concerns. Professor Deniz Odabaş, a member of the Health Ministry's Coronavirus Scientific Advisory Board, told Sabah newspaper on Tuesday that people should be wary of going into enclosed venues and mingling with crowds and should stay away from places with improper ventilation. "Particularly unvaccinated citizens, citizens who missed the second dose of the vaccine and those at the age of 50 and above and suffering from chronic illnesses should stay away from crowded places," she said.

"Vaccines are our greatest strength against the virus. Those who were administered two doses should absolutely have their third, booster shots," she said. Odabaş added that house parties for New Year's Eve should be limited to six people at most. Professor Tuba Dal, a clinical microbiology expert from Ankara Yıldırım Bayezit University, told Sabah that those with "full doses" of vaccines suffer from a mild case of infection when infected, but the unvaccinated were under the risk of severe cases. "You don't need to stop socializing, but you should socialize after taking personal protective measures," she warned. "If you are not vaccinated, it is better to welcome the new year at home," she said.