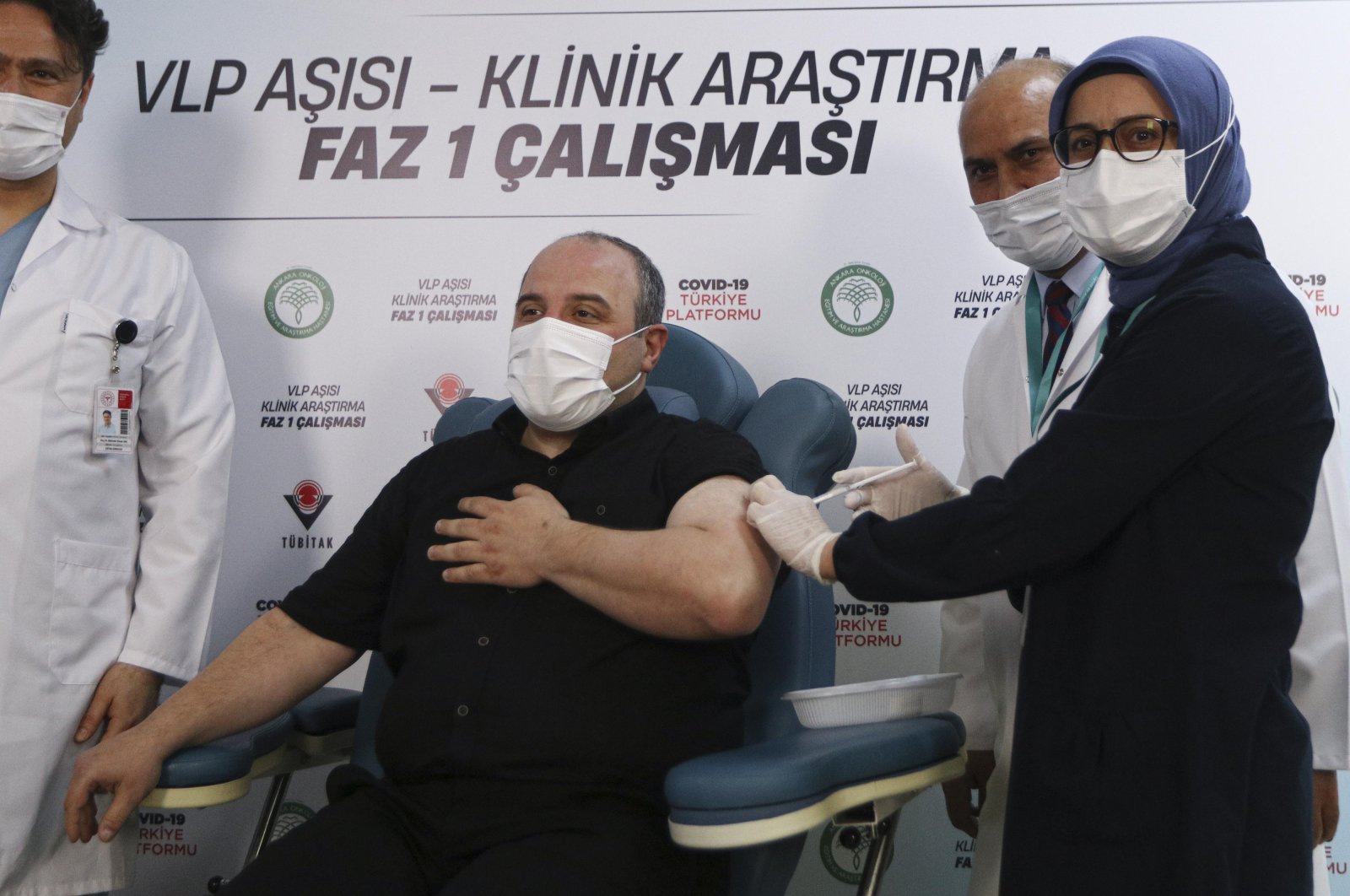 Turkey is on the verge of developing an innovative vaccine against the coronavirus. The vaccine, currently in human trials, is based on a very new method called VLP

The COVID-19 vaccine candidate based on the virus-like particles (VLP) method, developed by Mayda Gürsel from Middle East Technical University and Ihsan Gürsel from Bilkent University in a joint project, is based on the principle of mimicking a noninfectious form of the virus.

“The trials began on March 27 with 36 volunteers. Professor Hasan Mandal and I have now volunteered too,” he said, referring to the TÜBITAK director.

Adding that academics have requested support from the Turkish government for vaccine development, Varank said that the authorities fully backed the efforts. The minister also added that he and Mandal had promised to volunteer if the vaccine's development started the human trial phase.

“Today, we are keeping that promise,” he said.

“This vaccine developed by our professors has different qualities compared to the other ones abroad. Our vaccine has been developed by taking into consideration all four proteins of the coronavirus, and it has adjuvants increasing the efficacy of the vaccine. It also has the CpG adjuvant, which professor Ihsan Gürsel helped develop in the United States,” Varank added.

“We believe the results will be more effective compared to other vaccines,” he said.

The minister also called on the Turkish people to volunteer for the human trials of the domestic and innovative vaccine.

The vaccine has also been added to the World Health Organization's (WHO) list, Varank announced previously.

"Developed as part of the vaccine studies of the COVID-19 Turkey Platform TÜBITAK, the vaccine is the fourth VLP-based vaccine to begin human trials in the world," Varank said on Twitter.

If all phases are successful, Turkey will have 50 million doses of an innovative coronavirus vaccine candidate, according to the minister.

Speaking to reporters in Parliament late last month, he announced that Phase 1 human trials of the vaccine had started.

Stressing that the vaccine development process is not an easy one, Varank noted that the first phase can be completed in two months at the earliest.

"If all phases are successfully completed, we will have a vaccine candidate at the end of the year, with a capacity of 50 million doses," he said.

Varank said some countries wanted to work with Turkey in developing the vaccine.

"Some countries are willing to carry out Phase 3 trials (with Turkey)," he said.

He added: "If we engage in this type of work with them, the process will be shortened and the reputation of the vaccine will rise as it will be an international study."

Meanwhile, a tobacco-based coronavirus vaccine candidate is also being developed in Turkey.

The drug and vaccine candidate that can also be used in the form of a protective spray against the coronavirus has been developed by Akdeniz University in Turkey’s southern Antalya province.

The university reported Saturday that a protein produced in the leaves of a type of tobacco plant called “Nicotiana benthamiana” via the “Transient Plant Expression System” was used as a base for the drug, it noted.

Dr. Tarlan Mammedov, a member of the university’s Faculty of Agriculture and also a member of the Vaccine Science Board of the Biotechnology Institute of the Presidency of the Turkish Institutes of Health, along with his team produced the drug.

Mammedov said they are working on the "angiotensin-converting enzyme 2 (ACE2)," which, if used as a spray, is of great importance to prevent the virus from entering the cell.

He noted that the reduction of this enzyme, which is blocked by the virus, in the body leads to significant human health problems, noting that the enzyme is found in small amounts in the majority of patients in intensive care units.

'Drug can be released within 4 months'

"With the Transient Plant Expression System, we have achieved a high rate of production of this enzyme,” said Mammedov, adding that they are ready to release it to save people’s lives.

“These proteins, which we produce from the plant, can be used in treatment in both spray and injection forms,” he said.

He also said the drug can be released within four months if the financial source is provided.

In addition to the protective properties of these proteins, it can be applied against COVID-19, and used for therapeutic purposes if it is produced in the form of injections, Mammedov noted.

"But for this, a Phase 1 study needs to be conducted,” he added.

“We developed kits that measure the body's antibody level. We compared the kits we developed with commercially made kits and obtained the same results in the analyses.

“These kits can be used to measure patients' antibody levels. Tests with the live virus came back positive.”

“We conducted tests of vaccine candidates with live viruses”

Mammedov noted that they have also achieved an important stage in vaccine studies.

"Protein-based vaccines have advantages over other vaccines. They are effective against various mutations of the coronavirus.

“Animal tests showed that these antigens produced high titer antibodies in mice. This suggests that the proteins they produce in the plant constitute a promising vaccine candidate.

“We tested these vaccine candidates with live viruses. We found a high level of inhibition of the live virus from entering the cell,” Mammedov said.

“If financial support is provided, we are ready to move to (other) phase studies," he added.

Nasal vaccine also in the works

Ahmet Ahlatcı, CEO of Ahlatcı Holding, which is developing the first nasal COVID-19 vaccine of Turkey, told a webinar last week that animal trials of the jab had concluded and they would soon start human trials. “We hope to share good news soon,” Ahlatcı told the event organized by Turkuvaz Media Group’s InBusiness magazine.

Ahlatcı said the company had already developed one of the world’s fastest coronavirus diagnosis kits and that it took them one year to develop a vaccine.

“Our vaccine differs from conventional and modern vaccines as a protein-based vaccine. It is more reliable. With the nasal application, we wanted to fight the virus by chasing it through the path it (usually) enters and attacks the body. Having a protein-based vaccine is an advantage as it can be modified faster to respond to mutated variants of the virus and can be used as a model for a vaccine for future infectious disease,” he said.

The vaccine also works against the coronavirus's U.K. variant, studies have shown.

After a meeting of Turkey's Coronavirus Scientific Advisory Board recently, Health Minister Fahrettin Koca underlined the government's support for the development of intranasal vaccines against COVID-19.

"We aim to present the first nasal spray vaccine," Industry and Technology Minister Mustafa Varank announced earlier this week while attending the inauguration of Nanografi's graphene mass-production plant. "Preclinical stages have been successfully completed throughout the year."

Yunus Emre Deli, an official from the nanotechnology firm Nanografi that is developing the vaccine, told Anadolu Agency (AA) that research started in February 2020 and that all laboratory tests of the candidate had been performed at international standards.

Deli underlined that the pre-clinical studies of the vaccine candidate had been completed, adding that, unlike its inactive and messenger RNA (mRNA) counterparts, their intranasal model was protein-based.

"The production of the first doses of the vaccine started at a GMP (Good Manufacturing Practices) certified facility," he said, with Phase 1 trials expected to begin soon.

Meanwhile, Turkey has reported 62,606 new coronavirus cases, including 2,973 symptomatic patients, according to the Health Ministry data published on Saturday.

As many as 52,184 more patients won the battle against the virus, bringing the total number of recoveries to over 3.64 million.

Nearly 43.5 million coronavirus tests have been conducted in Turkey to date, with 319,316 tests done since Friday.

The latest figures show there are now 3,240 patients in critical condition nationwide.

Since its mass immunization drive began on Jan. 14, Turkey has administered over 19.95 million coronavirus vaccine shots.

Over 12.16 million people have received their first doses of the vaccine, while more than 7.78 million have completed a two-dose course, according to official figures.

Starting last Wednesday, special measures are in effect for the first two weeks of the Islamic holy month of Ramadan.

The weekday curfew now lasts from 7 p.m. (moved forward from 9 p.m.) to 5 a.m., during which intercity travel will also be banned, except in emergency cases. Weekend curfews will also continue in high-risk cities.

Cafes and restaurants will only provide delivery and takeout services, while wedding halls, sports centers and game halls will remain closed until the end of Ramadan.

Since December 2019, the pandemic has claimed more than 3 million lives in 192 countries and regions.

Over 140 million cases have been reported worldwide, with recoveries now over 79.8 million, according to figures compiled by the U.S.' Johns Hopkins University.