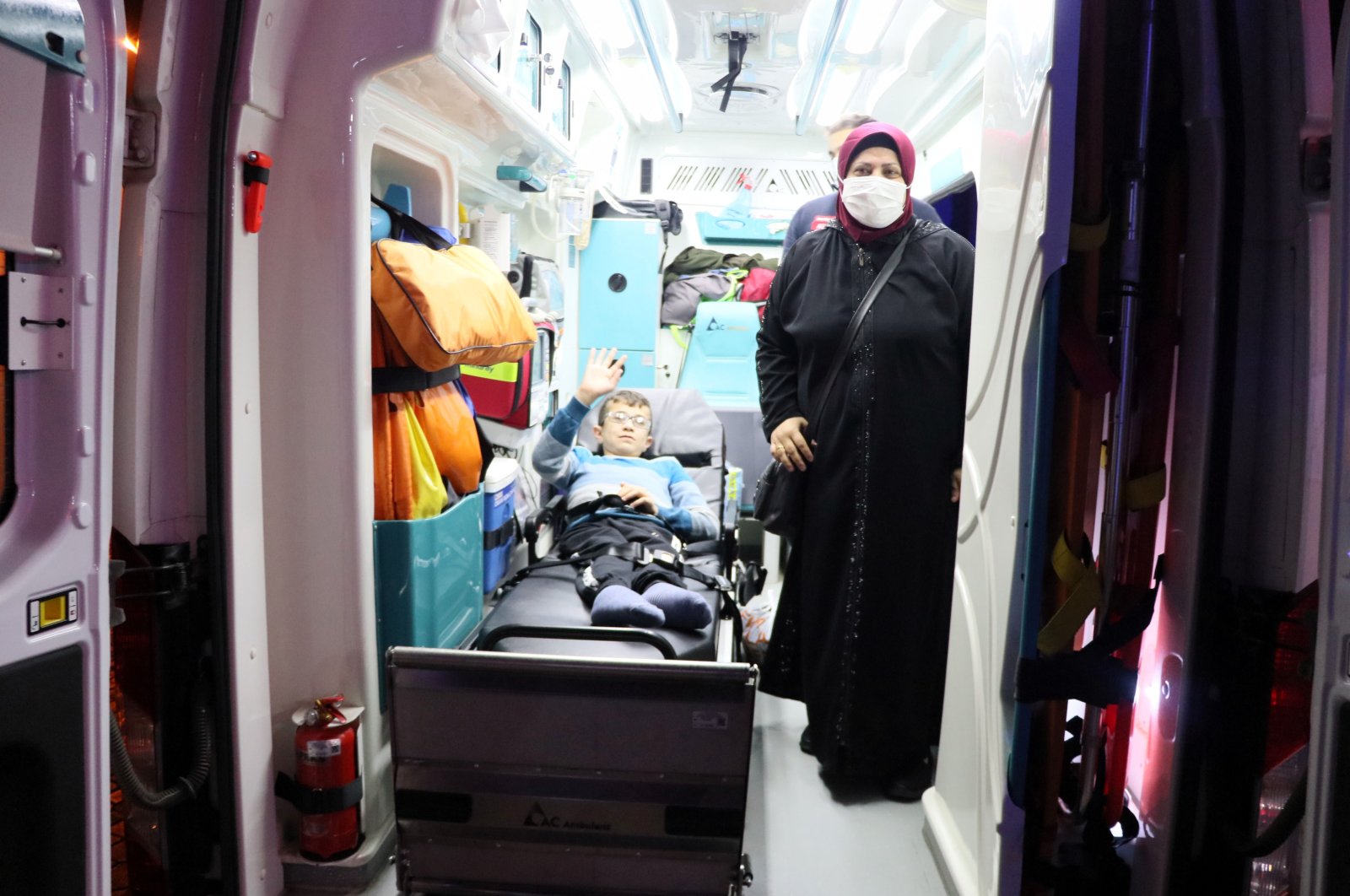 Mohammed Jamil Shahabi and his mother, Umm Mohammed Shahabi, wait in an ambulance before being airlifted to Istanbul, in Samsun, northern Turkey, Nov. 8, 2021. (AA PHOTO)
by DAILY SABAH WITH AA Nov 08, 2021 10:22 am
RECOMMENDED

Turkey came to the rescue of a young Syrian boy who sought treatment in the country after an airstrike by Assad forces left him disabled five years ago.

Mohammed Jamil Shahabi was first brought to a physical therapy and rehabilitation hospital in the northern Turkish province of Samsun this summer after his story made the headlines. He received more than four and a half months of treatment, and doctors at the hospital decided to perform spinal and hip surgery on him.

The Health Ministry transported Shahabi and his mother to a private hospital in Istanbul with an emergency service ambulance for the surgeries.

Expressing his happiness to Anadolu Agency (AA), he said he believed that his pain would soon subside and he would regain his health. "I got better after physical therapy. I believe I will be better after surgeries ... If I am well after the surgery, I want to go to school,” he said.

Shahabi, who lives with his mother and three siblings in al-Bab district in northern Syria, was wounded by shrapnel from an airstrike in 2016.

"We were injured with my friends in a plane attack while playing in the street. I was taken to the hospital," Shahabi recounted in an interview with AA last June.

Authorities told the family that there was no neurologist in the hospital and that they would have to wait several months for treatment. "I stayed lying in bed at home for seven or eight months. I also have very severe pain," the boy said. "I feel the pain like an electric shock because of the wound on my spinal cord. I feel pain when I'm on the street. I suffer at home, too. Wherever I go, I'm in pain."

The young boy had to drop out of school after a few months due to the intense pain.

"I can't stand the pain he's in. He's always crying. He can neither go to school nor live a normal life like other children," said Mohammed's mother, Umm Mohammed Shahabi. Recalling their struggle in Syria, she lamented: "No one helped us get treatment in Turkey. There is no hospital in Syria that we didn't go to. Doctors say he can be treated in Turkey, but his condition was getting worse by the day."

Syria has been mired in a vicious civil war since early 2011, when the Assad regime cracked down on pro-democracy protests with unexpected ferocity.

Over the past decade, around half a million people have been killed and more than 12 million had to flee their homes. Turkey hosts more than 3.7 million refugees from its neighbor Syria, the largest Syrian refugee community in the world.