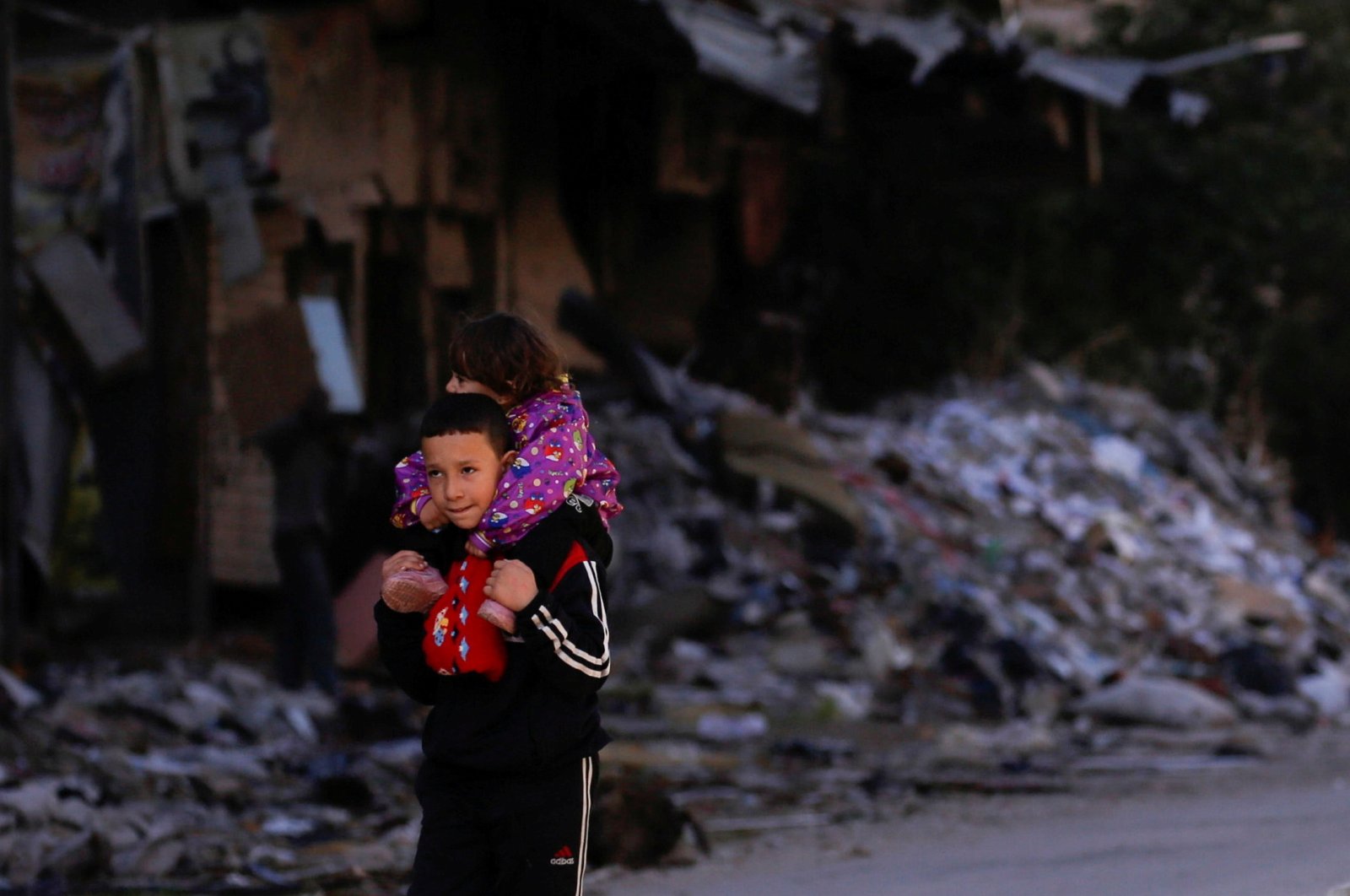 A boy carries a child past damaged buildings at the Yarmouk Palestinian refugee camp on the southern outskirts of Damascus, Syria, Dec. 1, 2020. (Reuters Photo)
by DAILY SABAH WITH AGENCIES Sep 14, 2021 4:48 pm

Russia and the Bashar Assad regime have been calling on Syrian refugees to return home, however, a UN report warns that hostilities are ongoing in several parts of the war-torn country as its economy crumbles

The situation in Syria is becoming “increasingly bleak” as human rights violations and conflict continue, U.N. war crimes investigators said Tuesday, underlining that the time is not ripe for refugees to return to their country under these conditions.

The U.N. Commission of Inquiry on Syria said the overall situation was becoming increasingly grim, noting hostilities in several areas of the fractured country, its collapsing economy, drying riverbeds and increased attacks by Daesh militants.

"One decade in, the parties to the conflict continue to perpetrate war crimes and crimes against humanity and infringing the basic human rights of Syrians," the chair of the commission, Paulo Pinheiro said, releasing its 24th report.

"The war on Syrian civilians continues, and it is difficult for them to find security or safe haven in this war-torn country."

Incidents of arbitrary and incommunicado detention by regime forces continue, the report said.

"The Commission has continued to document not only torture and sexual violence in detention but also custodial deaths and enforced disappearances," a press release said.

Amnesty International similarly released a report recently that said Syrian refugees who returned home have been subjected to detention, torture or have disappeared at the hands of the Syrian regime forces.

The Syrian regime and its chief international backer, Russia, have publicly called on refugees to return home and accused Western countries of discouraging Syrians from returning with claims that the country is still unsafe.

The regime has denied refugees face indiscriminate torture and reprisals. Bashar Assad has said millions of refugees were being forced to stay in host countries by "pressure or intimidation" and that host states were enticing them financially while benefiting from international aid allocated for them.

The war, which spiraled out of an uprising against Assad's rule, sparked the world's biggest refugee crisis. Syria's neighbors host 5.6 million refugees, while European countries are hosting over a million.

Refugees in some countries have faced pressure to return.

While Assad has recovered most of Syria, significant areas remain outside his control: Turkish forces are deployed in much of the north and northwest – the last major bastion of the anti-Assad opposition – and U.S. forces are stationed in the mainly terrorist-controlled east and northeast.

Commissioner Hanny Megally said there had been a "return of sieges and siege-like tactics" in southwestern Syria – an area where Russian-backed regime forces waged a campaign to snuff out an opposition-held pocket in the city of Daraa.

Covering the year to the end of June, the report also noted increased hostilities in the northwest, saying markets, residential areas and medical facilities had been struck from the air and ground, "often indiscriminately, causing numerous civilian casualties."

At least 243 people were killed or maimed in seven car bomb attacks in the opposition-held towns of Afrin and Ras al-Ain north of Aleppo, though the full toll was considerably higher, it said.

The report criticized the militant group that controls Idlib, Hayat Tahrir al-Sham (HTS), for imposing restrictions on media and freedom of expression, saying it had arbitrarily detained media activists and journalists including women.

It also criticized the unlawful internment of thousands of women and children held on suspicion of Daesh links in camps in areas controlled by the U.S.-backed YPG, the Syrian wing of the PKK terrorrist group, saying they had no legal recourse.

They had "been left to fend for themselves in conditions that may amount to cruel or inhuman treatment."

The al-Hol camp is home to nearly 70,000 people – most of them women and children – who were displaced by the U.S.-led coalition offensive against Daesh. Nearly half of those living in the sprawling camp were Iraqis who faced dire living and security conditions.

About 10,000 foreigners are housed in a secure annex in the camp, and many remain die-hard Daesh supporters.

This has made the repatriation of Iraqis and many foreigners a contentious issue. Despite calls for repatriation, many countries have declined to take their nationals back. That's either because they have no legal recourse for how to handle former Daesh members or out of fear of their continued link with the terrorist group.

Meanwhile, Russian President Vladimir Putin told Bashar Assad during the Syrian dictator's surprise visit to Moscow that the presence of foreign troops in Syria – the ones not invited by Damascus – are hindering Syria's revival.

The Kremlin made the announcement on Tuesday morning and published a photo of the meeting that took place between the two presidents late Monday. According to the Kremlin, the talks focused on the conflict in Syria.

Repeating his criticism of the uninvited foreign troops in the country, Putin was quoted as saying that troops are in parts of Syria without a U.N. resolution or "your (Assad's) consent," describing the situation as a violation of international law.

The Russian president underlined that the troops were hindering Syria's reconstruction and preventing a political settlement.

Russia, which conducts military operations in Syria, has been a close ally of Assad's regime, propping it up through nearly a decade of war.

Turkey and the United States are among the nations that have intervened militarily on the side of Assad's opponents.

Assad said he was happy to meet with Putin six years after the Syrian and Russian armies began working together "to liberate lands, bring back refugees to their cities and also protect innocent civilians" from terrorism.

Syrian opposition groups that have fought to remove Assad from power are referred to by Damascus as terrorists.

Assad also thanked Russia for its support within international forums and its humanitarian support.