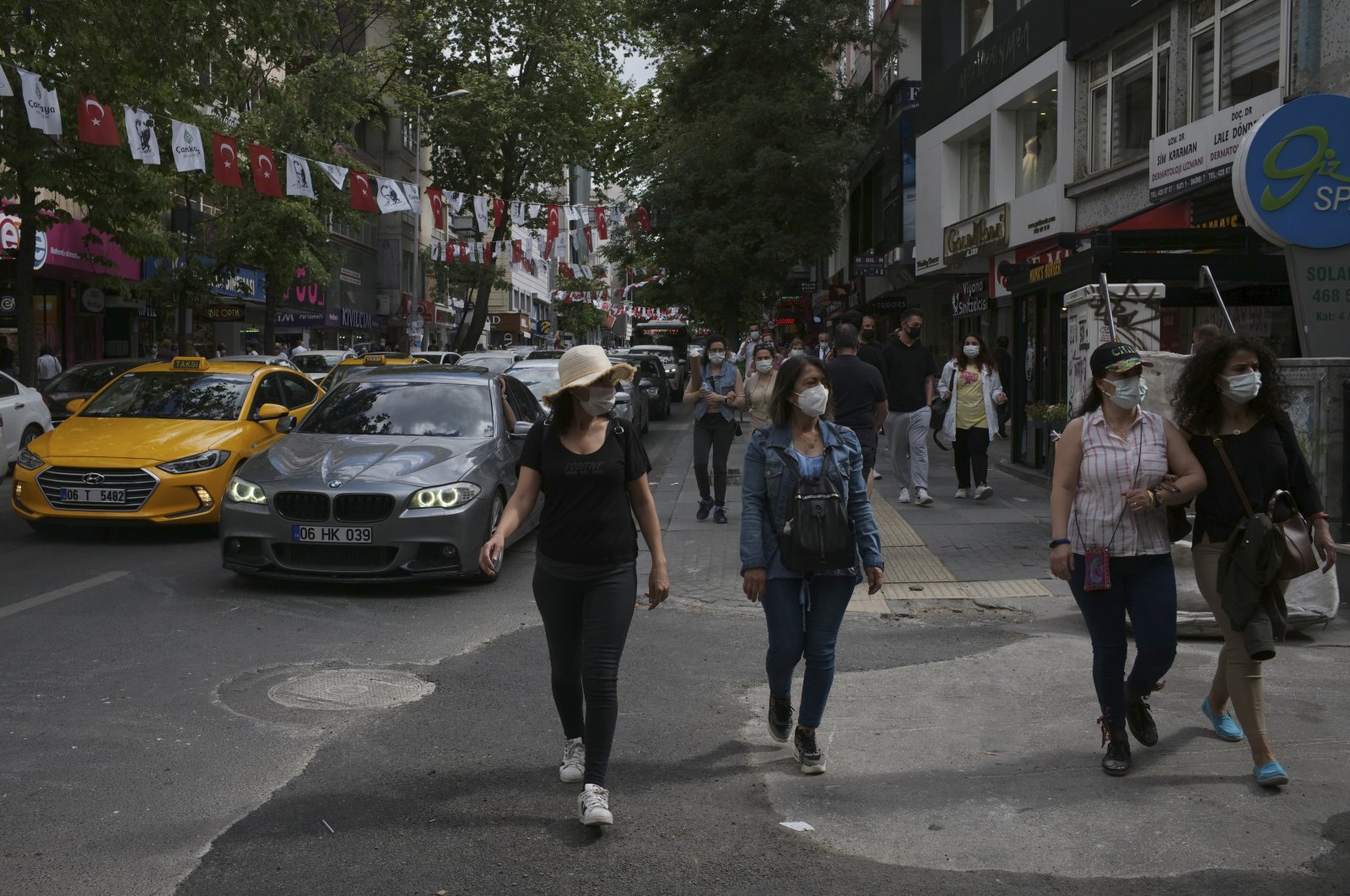 People wearing masks to help protect against the spread of the coronavirus walk near a busy street, two days after a 17-day full lockdown ended, in Ankara, Turkey, May 18, 2021. (AP Photo)
by Daily Sabah with AA May 19, 2021 11:39 am
RECOMMENDED

More than 15.3 million people have received their first doses of coronavirus vaccine, while over 11.4 million have been fully vaccinated since the launch of a mass vaccination campaign on Jan. 14, according to official figures. In total, Turkey has administered over 26.7 million doses of COVID-19 vaccines.

The Health Ministry confirmed Tuesday a total of 11,937 cases, including 916 symptomatic patients, across the country in the past 24 hours.

Turkey's overall case tally is now over 5.13 million, while the nationwide death toll reached 45,186, with 203 more fatalities over the past day.

As many as 10,125 more patients won the battle against the virus, taking the total number of recoveries past 4.97 million.

Over 51.29 million coronavirus tests have been conducted to date, including 217,276 since Monday.

The latest figures show that the number of COVID-19 patients in critical condition stands at 2,232.

The total number of cases per 100,000 people by province was 184.78 in the metropolis Istanbul, 152.63 in the capital Ankara and 93.86 in western Izmir, according to weekly data shared by Turkish Health Minister Fahrettin Koca.

"It is in our hands to make this good course permanent. We succeeded before, we can do it again," he added.

Koca said early Tuesday that Turkey will receive 90 million doses of the Pfizer-BioNTech coronavirus vaccine in the next two months to facilitate the country's fight against the pandemic.

Speaking at a press conference, Koca said that BioNTech co-founder Uğur Şahin would participate in this week's Coronavirus Scientific Advisory Board meeting and would provide details about the delivery process.

Koca noted that the ministry expects the Turkish population to have developed public immunity against the virus before September with the help of the incoming 50 million doses, which are expected to be delivered in June and July. The health minister added that they had invited Şahin to Turkey at the beginning of June.

The health minister stated that Sinovac, the Beijing-based firm behind CoronaVac, had granted Turkey authorization to produce the vaccine but that production would not start for a few months. The health minister noted that 10 million CoronaVac vaccines are expected to be delivered to Turkey within the week.

National Education Minister Ziya Selcuk said on Tuesday that all teachers and school employees over the age of 40 were now eligible to receive vaccinations.

The country once ranked sixth in terms of vaccination in the world, but the drive has somewhat slowed down. Experts tie it to challenges in vaccine deliveries, something the health minister recently has partly acknowledged. But authorities are also concerned that anti-vaxxers and vaccine skeptics may affect the inoculation drive.