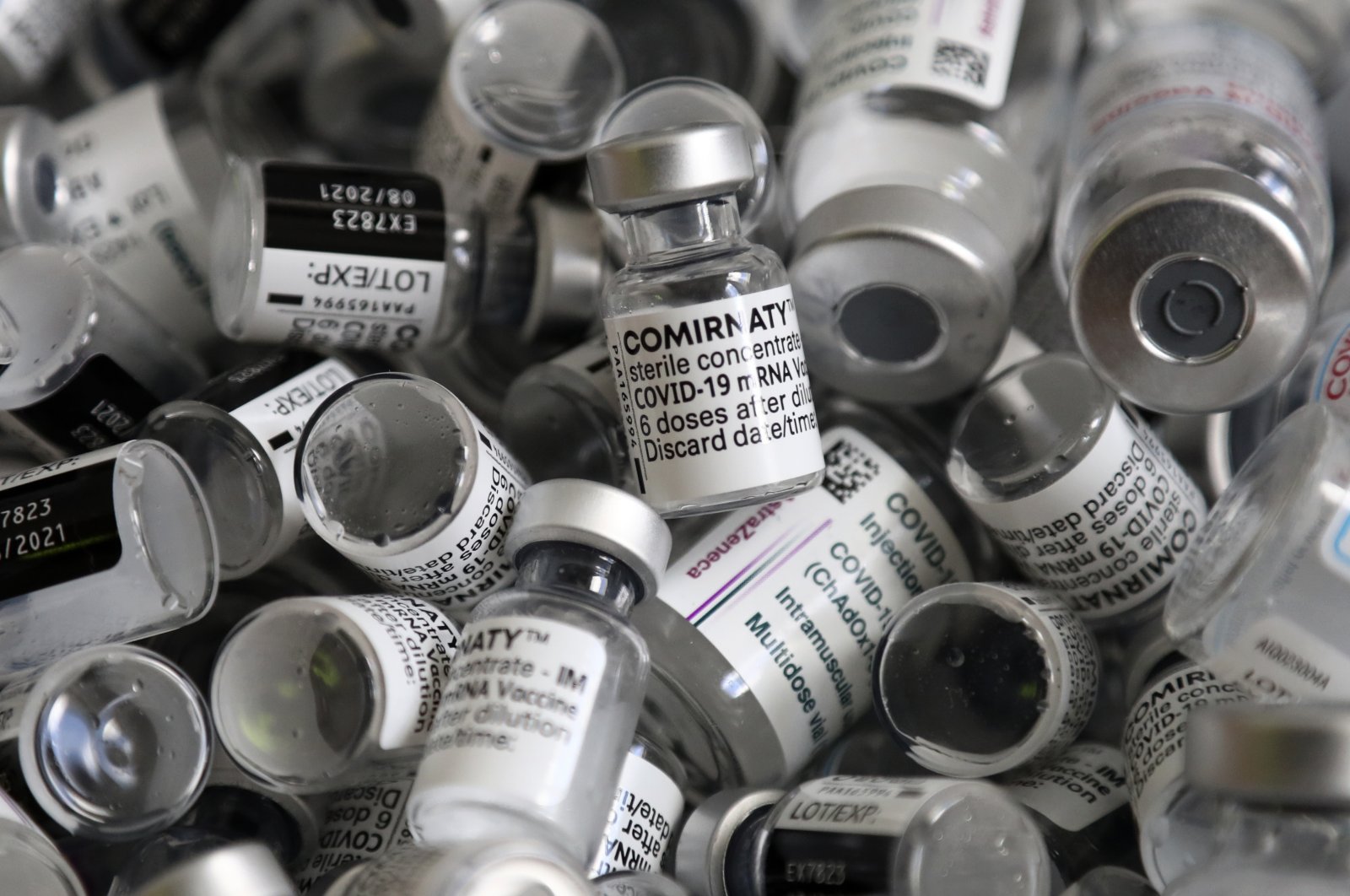 Empty vials of the Pfizer-BioNTech COVID-19 vaccine lie in a box during a vaccine campaign at the Vaccine Village in Ebersberg near Munich, Germany, May 15, 2021. (AP Photo)
by Daily Sabah May 18, 2021 12:19 pm
RECOMMENDED

Health Minister Fahrettin Koca announced Tuesday that Turkey will receive 90 million doses of the Pfizer-BioNTech coronavirus vaccine in the next two months to facilitate the country's fight against the pandemic.

Speaking in a press conference, Koca said that BioNTech co-founder Uğur Şahin would participate in this week's Coronavirus Scientific Advisory Board meeting and provide details about the delivery process.

Koca noted that the ministry expects the Turkish population to have developed public immunity against the virus before September with the help of the incoming 50 million doses, which are expected to be delivered in June and July. The health minister added that they had invited Şahin to Turkey at the beginning of June.

With the declining coronavirus cases thanks to a strict lockdown in Turkey, the country has entered a 15-day period of gradual lifting of restrictions as of early Monday.

The 17-day full lockdown, which covered the remainder of the Muslim holy month of Ramadan, as well as three days of Ramadan Bayram, also known as Eid al-Fitr, ended as of 5 a.m. local time on Monday.

As part of the new measures, cafes and restaurants will only offer delivery services while chain supermarkets will be closed on Sundays.

All intercity travel will be subject to permissions and public transport will continue to operate at 50% capacity. An Interior Ministry statement early Sunday said the gradual normalization will start at 5 a.m. local time Monday and conclude at the same time on June 1.

During the new period, weekdays will see night curfew from 9 p.m. to 5 a.m., while weekends will be under full lockdown, the ministry said. Intercity travel will be allowed outside the curfew days and hours.

There will be no special restrictions on people aged 65 and over who have taken two doses of COVID-19 vaccines or those under 18. Cafes and restaurants will provide takeaway and delivery services only on weekdays from 7 a.m. to 8 p.m., and on weekends, delivery service only from 7 a.m. to midnight. Shopping malls will operate from 10 a.m. to 8 p.m. on weekdays and will be closed on weekends. Wedding halls, sports centers and game halls will also remain closed.

According to Hürriyet daily, the government wants to keep daily cases between a maximum of 10,000-15,000 during the summer season. Experts warn against a possible surge after the beginning of public mobilization.

Since December 2019, the pandemic has claimed over 3.37 million lives in 192 countries and regions, with nearly 162.6 million cases reported worldwide, according to the U.S.' Johns Hopkins University.

The U.S., India, and Brazil remain the worst-hit countries in terms of the number of infections.