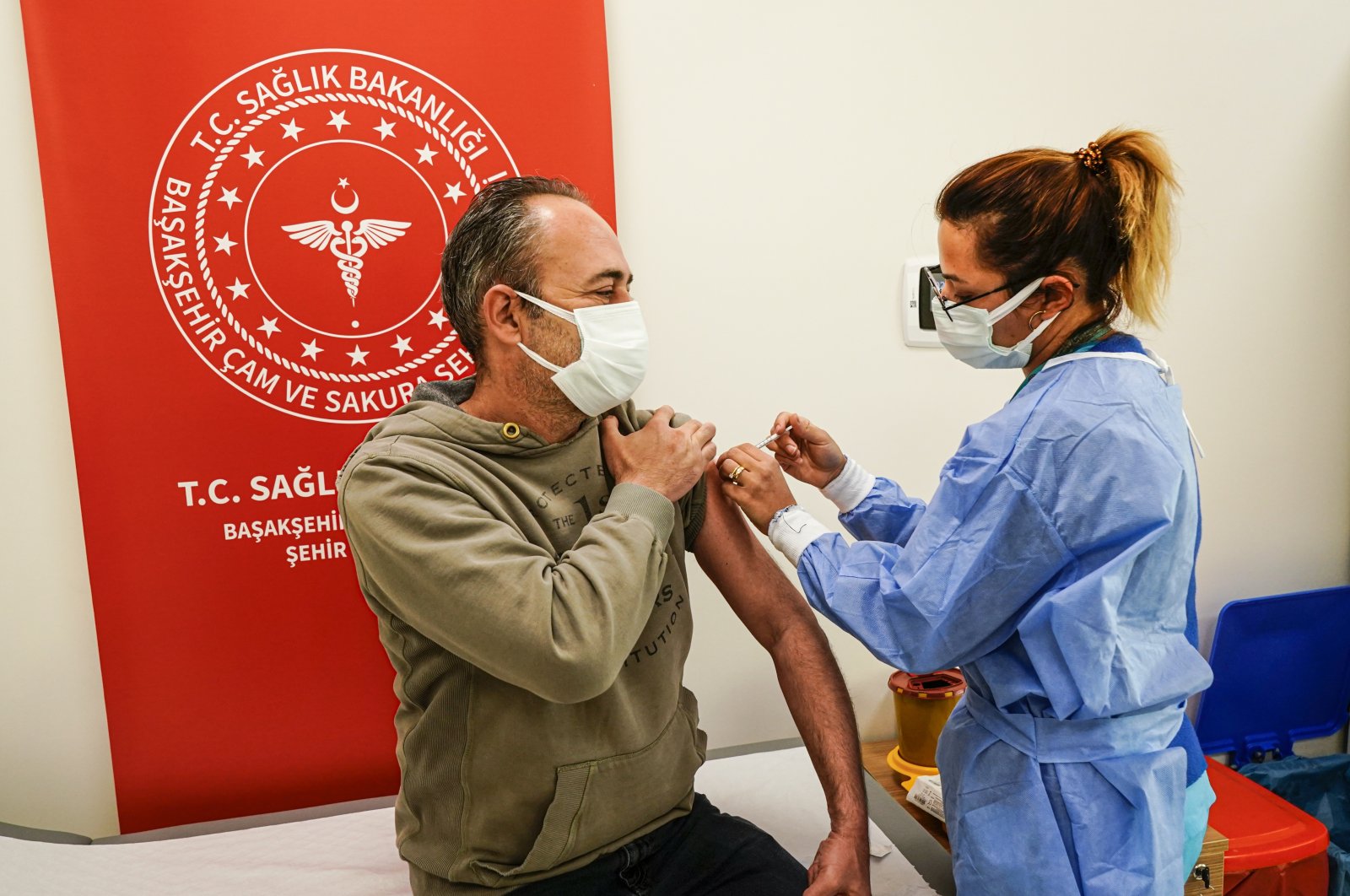 The nation's coronavirus inoculation efforts are continuing at full speed as over 16 million doses have been delivered so far, earning it one of the world's top spots

"We rank sixth among countries with the highest number of vaccines," Health Minister Fahrettin Koca said in a statement on Saturday. "The countries that give more vaccines than us are the U.S., China, India, the U.K. and Brazil," he added.

According to the minister, Turkey has so far administered more than 16.6 million coronavirus vaccine jabs across the country.

"Among the countries which have yet to produce their own vaccine, Turkey stands as one of the states that conducts the most jabs," Fahrettin Koca said on Twitter.

According to Health Ministry data, since Turkey began a mass COVID-19 vaccination campaign on Jan. 14, more than 9.5 million people to date have received their first doses, while second doses have been given to over 7.13 million.

As of the end of March, Turkey entered the second stage of its COVID-19 vaccination campaign by beginning immunizations for those aged 60 and above and their spouses, as well as certain individuals who are considered high risk. Among the prioritized group are cancer patients with malign tumors, the morbidly obese, dialysis patients, those with Down syndrome and those receiving immunosuppressive treatment.

The vaccine rollout in Turkey has been relatively quick with the government dividing the whole process into four stages. The first stage, which includes critical front-line health care staff, people over the age of 65, elderly and disabled adults living in crowded places and those living at nursing homes, was recently concluded.

The Turkish Ministry of Health has also updated its digital hospital and doctor appointment system to accommodate choice for the coronavirus vaccine. As part of the update, those who enter the Central Physician Appointment System (MHRS) will be asked which vaccine they would prefer to have while selecting the hospital, clinic, day and time of their appointment. Koca said that the online selection option will be live after April 2. Those who have a vaccination appointment before then can call the government health helpline 182 to change their vaccine.

To see if you are prioritized for the vaccine or if your turn has arrived, you can also check the government's e-Nabız (e-Pulse) app, a digital platform that stores all health records. Those registered on the app will also be able to access their digital vaccination certificates after they receive both doses.

Meanwhile, the first doses of the Pfizer-BioNTech vaccine Comirnaty were administered in the capital Ankara on Friday. Turkey has so far received 2.8 million doses of the vaccine, which was developed by second-generation Turkish immigrants in Germany.

The total is set to reach 4.5 million in the coming weeks, Koca told reporters in Parliament on Tuesday.

People who had appointments for COVID-19 shots at Ankara City Hospital on Friday were asked for their preference between the Pfizer-BioNTech and China's CoronaVac jabs.

There were no side effects reported by people who opted for the Pfizer-BioNTech vaccine.

Adem Özsoy, a Turkish citizen, said he was happy to have received his first dose of the vaccine.

Senol Bulcan, another recipient, urged people to sign up for vaccinations and said he was looking forward to seeing the end of the pandemic.

People in Turkey can schedule appointments for vaccinations over the phone, online and through a mobile app.

With Comirnaty’s arrival to Turkey, questions have arisen among the public concerning which jab to choose. Experts say both vaccines are good for protecting against the coronavirus, though opinions are mixed. Ümit Savaşçı, an infectious diseases expert from the Health Sciences University in the capital Ankara, says each vaccine caters to different types of people. “You should choose CoronaVac if you are taking immunosuppressive drugs, chemotherapy or have a history of neurological disease. If you are young, do not have any health conditions or have a chronic disease (other than cancer and neurological diseases), you may opt for Comirnaty as its rate of protection is 10% higher than CoronaVac in those cases,” he said.

Savaşçı told Demirören News Agency (DHA) Friday that the results of studies showed that people who received CoronaVac jabs had recovered from infections easily even if they were infected after vaccination and the vaccine “decreased the hospitalization rate” among patients by 100%.

He said, although Comirnaty appeared to have higher efficacy than CoronaVac, the number of doses currently available is limited. Savaşçı, who himself volunteered for human trials of Comirnaty, said he did not suffer any side effects after months of observations and assured the public not to be worried about any side effects of either Comirnaty or CoronaVac. “They have both undergone extensive tests and analysis (by the Health Ministry) before they were approved for mass use,” he noted.

Savaşçı also dispelled the rumors that the vaccines “infect” people. “People who get vaccinated but infected later anyway falsely believe it is the result of the shot. It is impossible to get infected via a vaccine. For mRNA vaccines, for instance, no traces of the vaccine is left in the body soon after vaccination. It does not affect our genes, it does not leave any genetic damage as (some have) claimed,” he said.

Turkey itself is expected to roll out its first locally produced COVID-19 vaccine by the end of summer, the country's health minister said Thursday, as Turkish scientists work on more than a dozen vaccines and drugs against the virus.

Samsun remains first as cases on the rise countrywide

Health Minister Koca has also announced weekly coronavirus infection rates across the 81 provinces. According to data shared by the minister, the Black Sea province of Samsun continued to have the highest weekly case total with 678 per 100,000 people.

"It is in our hands to turn the situation in our favor," Koca said, sharing infection data concerning the period between March 27 and April 2 on Twitter.

The southeastern provinces of Şırnak, Hakkari, Şanlıurfa, Bitlis and the eastern province of Van had the lowest COVID-19 infections per 100,000 people between the given dates, with Şırnak having just 23.

As of Saturday, Turkey confirmed more than 3.44 million cases, 32,078 fatalities and over 3 million recoveries nationwide.

In the face of rising case and fatality numbers, Turkey announced the return of weekend lockdowns in high-risk areas, as well as other restrictions, in addition to special measures for the upcoming Muslim holy month of Ramadan.

Since December 2019, the pandemic has claimed over 2.84 million lives in 192 countries and regions, according to figures compiled by the U.S.' Johns Hopkins University. Over 130.5 million cases have been reported worldwide, with recoveries now nearing 74 million.