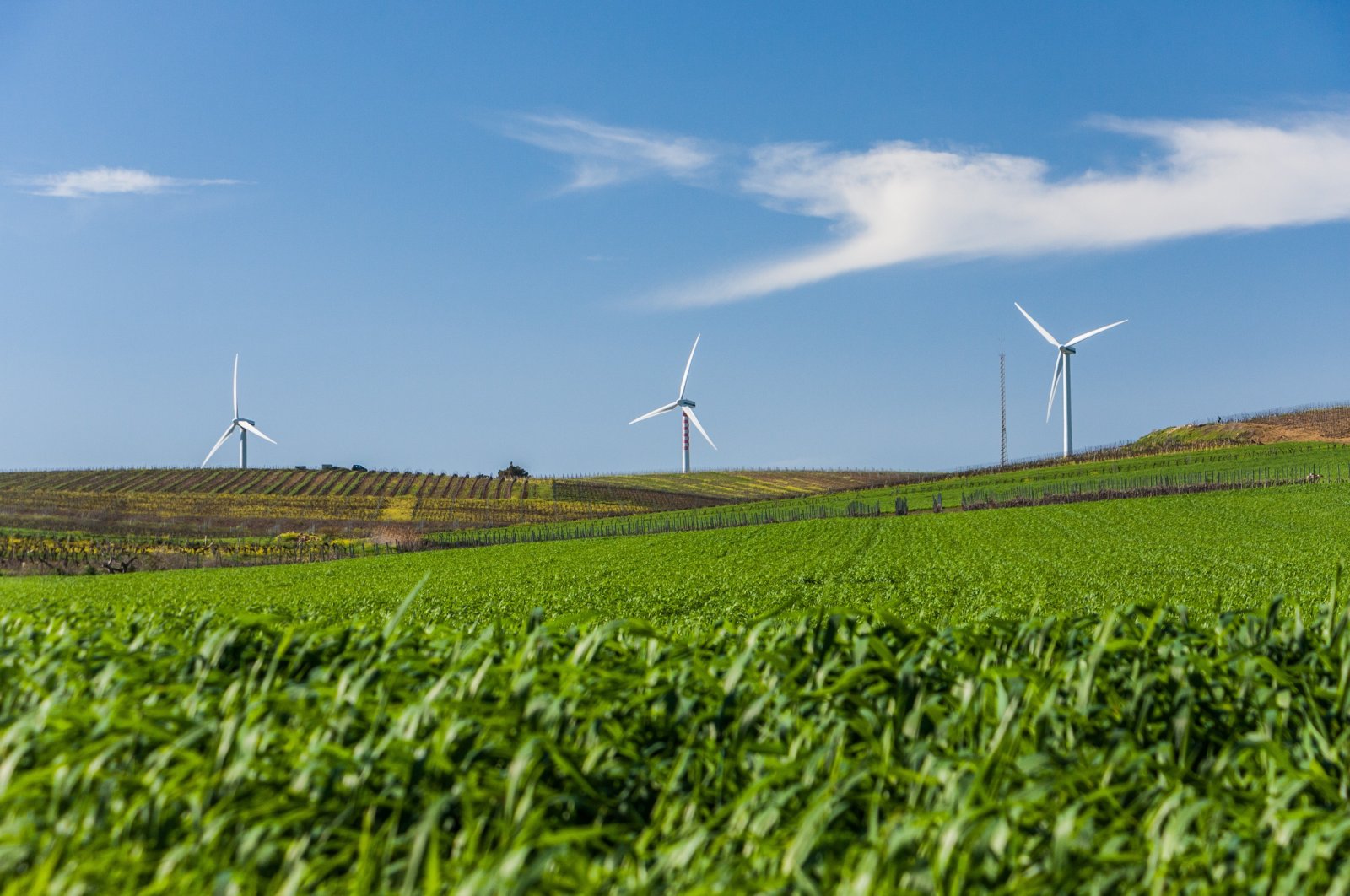 An agriculture field in Turkey is seen with three windmills in the background in this undated file photo. (IHA Photo)
by DAILY SABAH Mar 07, 2021 1:36 pm
RECOMMENDED

The Zero Waste project initiated by first lady Emine Erdoğan in 2017 is continuing in full speed as Turkey now aims to free its agriculture from waste.

The country now aims to recycle every byproduct that agricultural activities cause, from the moment the seed is planted to harvest.

The authorities encourage the recycling of stems, hay, cobs and plastic waste produced in the agricultural processes, as first steps are being taken.

Within the scope of the “1000 Farmers, 1000 Blessings” project, farmers’ transition to Zero Waste Management System will be encouraged.

With the pilot scheme that kicked off in central Konya and Karaman provinces, three tons of non-hazardous waste and 400 kilograms of hazardous waste have been collected.

The hazardous waste has also been collected by specialized vehicles, and the waste will be repurposed as alternative raw material.

With the collected waste, 117 kilograms of greenhouse gas have been prevented and over 16,500 kilowatt-hours of electricity have been saved.

The project aims to reach 10 million farmers by 2030, in accordance with the United Nations’ goals in agricultural development. Farmers currently enrolled in the Zero Waste program receive training, digital agriculture tools and consultancy provided by the government.

Within the scope of the program, the health of agricultural fields is also monitored by satellites. The data provided by the satellites are used to create development maps that show the current state of plants’ growth. These maps are later provided to the farmers for better inspection and knowledge of their fields.

Turkey's Zero Waste project has evolved into a nationwide campaign over the past four years. The recycling scheme added an extra TL 17 billion ($2.3 billion) to the Turkish economy with significant savings on tons of material that are normally thrown away every year.

Overall, Turkey saved 315 million kilowatts per hour (kph) of energy and 345 million cubic meters of water. The project helped fight climate change and helped the country prevent greenhouse gas emissions of up to 2 billion tons and saved 209 million trees from being cut down.

The country, among the world’s developing economies, pursues sustainable development goals with the help of this project. In a world where the solid waste amount is expected to reach 3.4 billion tons in 2050, recycling remains a key issue. Turkey itself will have an annual 38 million tons of household waste within the next two years. Organic waste comprises a majority of the household waste in the country, while paper waste accounts for 10% of the waste and plastic waste makes up 6%. Figures show that a large amount of waste can be recycled, used as raw material and entirely new materials. Unfortunately, Turkey has been dumping its waste carelessly for decades, recycling only gained popularity in the past decade.

The Zero Waste project, under the supervision of the Ministry of Environment and Urban Planning, is expected to expand across the entire country by 2023, the centenary of the Republic of Turkey. Authorities plan to introduce the practice, whose most basic aspect is allocating separate bins for different kinds of waste, everywhere, from airports to bus stations, schools, shopping malls, hospitals and factories among other facilities. The ultimate goal is to bring the recycling rate to 35% in the next two years. This goal also means new employment for 100,000 people in recycling, annual revenue of TL 20 billion ($2.7 billion) and a zero-waste system implemented in 400,000 buildings across the country.

Though numbers may appear small, it does mean a lot for a country where rapid urban development and changing climate remain a threat. Saving 1 ton of paper from going waste is equal to saving 17 trees from being chopped down for the paper and packaging industry. Similarly, food saved from going into dumpsters can be recycled as fertilizer for plants.