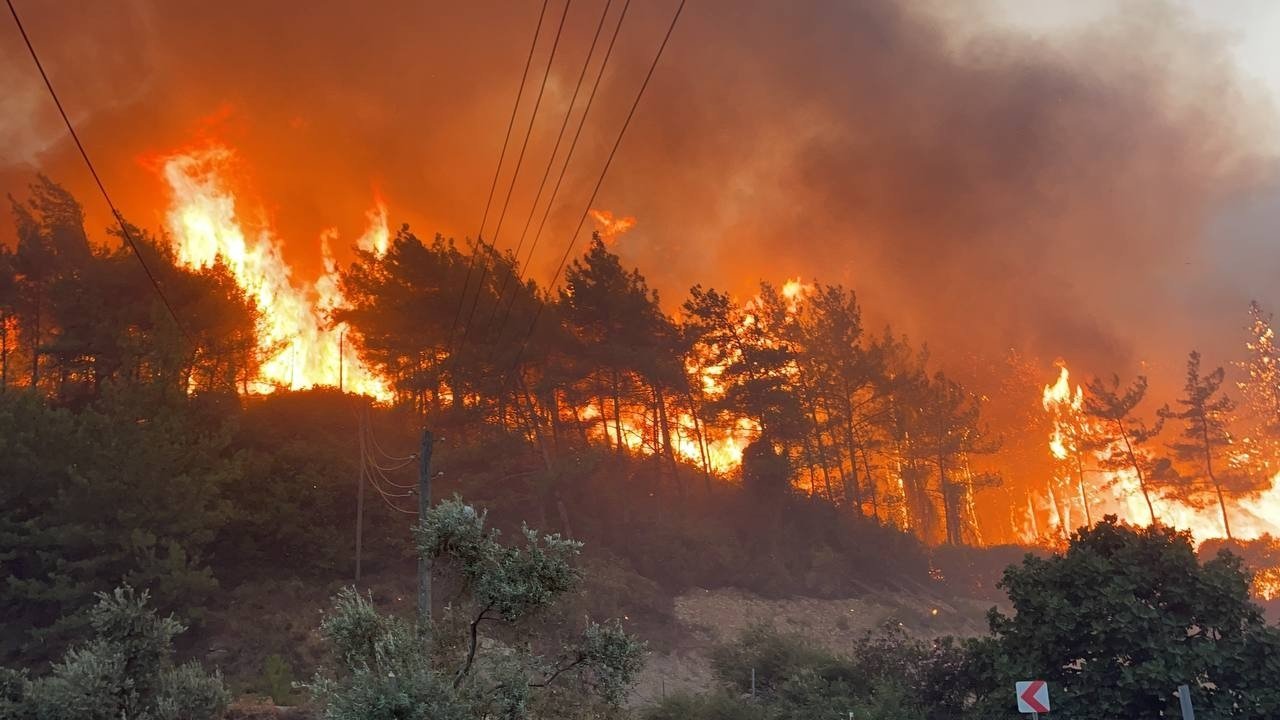 Twelve wildfires still burn across Turkey with 198 others under control, authorities announced on Friday, and expressed hope all will be put out by Friday

President Recep Tayyip Erdoğan announced on Friday that 196 wildfires have been extinguished since late July and 12 fires were still burning across the country on the 10th day of the first major fires. Shortly after his remarks were broadcast, Minister of Agriculture and Forestry Bekir Pakdemirli announced that two major fires, in Manavgat and Gündoğmuş districts, one of the most devastating among dozens, were brought under control and cooling efforts were underway.

Strong winds and scorching heat prolonged fires mostly raging in and near popular vacation destinations, including Marmaris in Muğla and Manavgat in Antalya. Flames advanced toward residential areas for days, prompting the evacuation of hundreds of people. In rural neighborhoods of Antalya, dozens of houses were devastated by the fires, leaving a large number of people homeless. Fires in Antalya and Muğla left at least eight people dead.

"We managed to prevent the blazes from advancing further despite strong winds today," said Foreign Minister Mevlüt Çavuşoğlu at a press conference in Antalya on Thursday. "We aim to bring them totally under control tomorrow." Çavuşoğlu, a native of Antalya, has been in the region along with a delegation of ministers since the first days of the blazes.

Regarding the forest fires in Manavgat, one of the hardest-hit regions, Çavuşoğlu said the fire response by air and land stopped the flames from spreading further. Over 6,500 people and more than 1,800 vehicles have engaged in operations to contain the wildfires, he said, adding air elements had made 1,650 sorties on Thursday alone.

At least 770 people have been affected by the fires, with six of them currently receiving treatment in hospitals, Çavuşoğlu added. As many as 1,352 buildings are seriously damaged or completely destroyed. So far, almost $2 million (TL 17 million) has been distributed for 1,055 families affected by the fires, Çavuşoğlu said, adding "we will quickly provide financial aid for citizens in areas which have been damaged." The minister also said that the U.S. has offered to send two helicopters to help Turkey battle the massive fires and that the two countries are now working on the details. Poland also offered support to the country. The Polish Embassy in Ankara announced that a crew of 14 people, including six firefighters and eight police officers, a police helicopter and a fire truck will be dispatched to Turkey from the European country on Friday and Saturday. On Friday, President Erdoğan announced that Azerbaijan would be dispatching an additional 100 personnel highly trained in firefighting, plus five helicopters with nighttime operations capability have arrived from Ukraine.

The government has put extraordinary efforts into fighting the fires since they erupted nine days ago, Minister of Transport and Infrastructure Adil Karaismailoğlu said at the same press conference. "We will make great efforts to remove the traces of this disaster," he stressed. Noting that they are visiting the neighborhoods affected by the fires one by one, he said they are determining the needs of people on the ground. "We continue to work effectively and in coordination with all our ministries and relevant institutions to meet these needs quickly," he added.

A heat wave across southern Europe, fed by hot air from North Africa, has contributed to wildfires breaking out across the Mediterranean, including in Italy and Greece. The heat wave is forecast to continue in Turkey and Greece until the end of the week. On Thursday, Agriculture and Forestry Minister Bekir Pakdemirli suggested the creation of a mechanism under which Mediterranean nations would assist each other in combating forest fires. "The time has come for a Mediterranean union to fight against forest fires because it is clear that from now on we will have to live with hot weather and global warming," he said.

The fires were the most devastating in recent memory, at the height of “forest fire season” during the summer. The average size of forests ravaged by yearly fires was 17,578 hectares between Jan. 1 and Aug. 5, since 2008. This number for the same period of 2021 stands at 157,482 hectares, according to a study by scientists at Cerrahpaşa Faculty of Forestry at Istanbul University. Professor Yusuf Serengil, a member of the faculty, told Anadolu Agency (AA) Friday that Turkey was going through one of the worst wildfire disasters in years. Serengil said climate change was one of the important actors in the rise of the number of wildfires.

“We are seeing the impact of climate change much earlier than expected and in a more intense way. Rising temperatures cause vaporization. Combined with irregular patterns of precipitation, this prolongs the fire season,” he noted.

He also pointed out the “human factor” in the surge in forest fires. “Residential areas are expanding and both housing and industrial units are closer to the ecosystem of plants and animals. Forests are also under pressure due to the growing population, with more people using forests, for example, for picnics. Other factors heightening the risk of fires are roads going through forests or near them, and infrastructure works in areas with forests,” he explained.