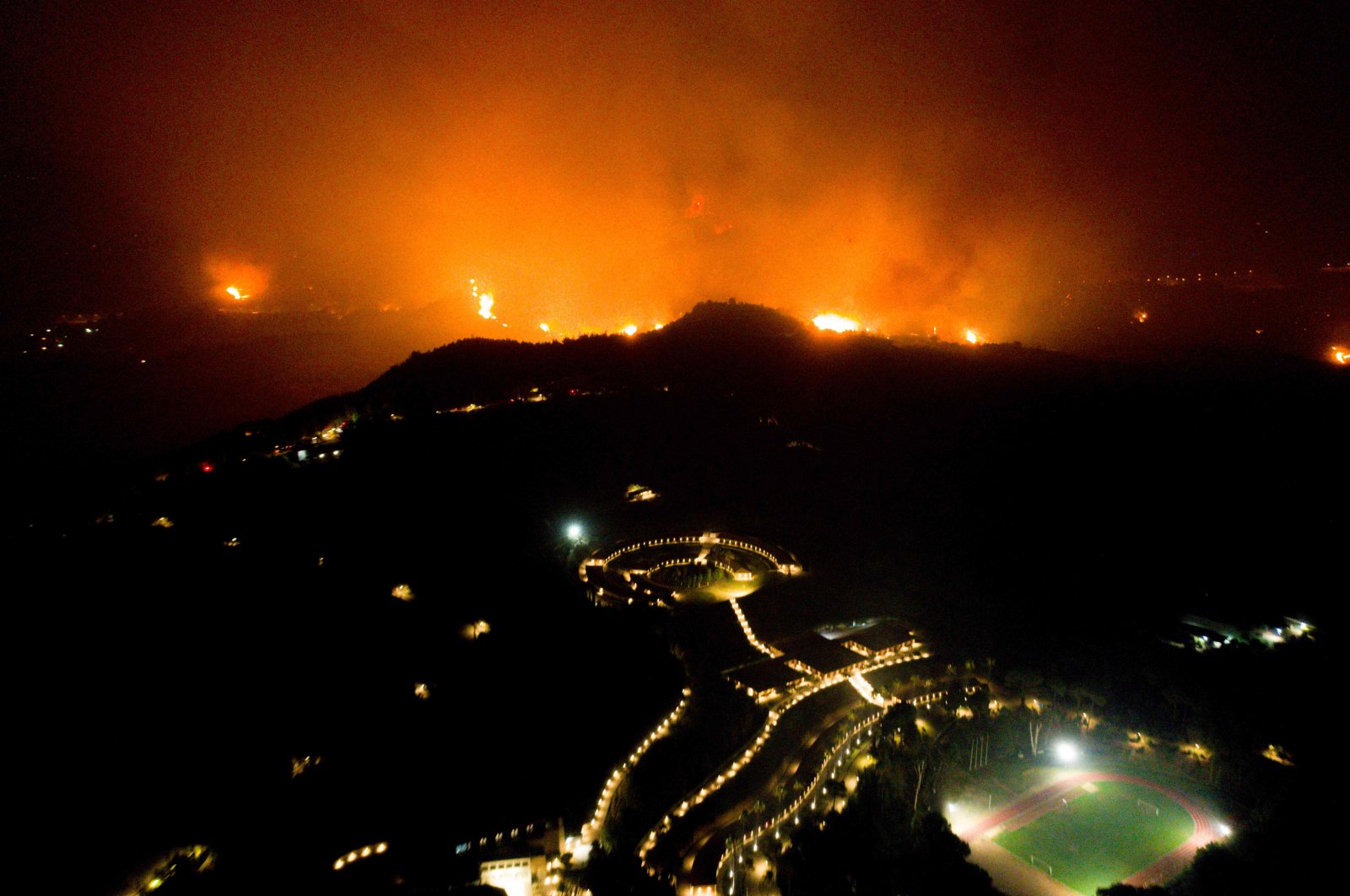 Forest fires fueled by a protracted heat wave in Greece raged into Thursday, forcing the evacuation of dozens of villages as firefighters managed to prevent the flames from reaching the archaeological site at the birthplace of the ancient Olympics.

The military announced it would increase its involvement in firefighting and prevention, with ground and air patrols in areas vulnerable to wildfires.

At least three significant fires were burning, on the island of Evia, in southern Greece and on the outskirts of Athens where a major forest blaze rekindled, as well as dozens of smaller ones. No deaths or severe injuries have been reported, but there has been widespread destruction to buildings and to Greece's quick-shrinking forests.

"The country is facing an unprecedented environmental crisis" with multiple fires fueled by a heat wave entering its second week, said Prime Minister Kyriakos Mitsotakis, visiting the site of the blaze in southern Greece that had threatened ancient Olympia, where the Olympics were held every four years from 776 B.C. for more than a millennium.

More difficult days lie ahead, he said, as winds have been predicted to pick up and the heat wave continues. "I fully understand the anger, rage, exasperation of people who have seen their property lost,” Mitsotakis added. The prime minister said ancient Olympia's archaeological site and museum had been successfully protected.

Citizens Protection Minister Michalis Chrisochoidis said earlier that firefighters waged "an all-night battle” to save the site. "We will continue the battle all day in order to contain all the fronts and extinguish the fire. The conditions are difficult,” Chrisochoidis said.

Wildfires in the same area in 2007 killed dozens of people but spared Olympia’s ancient sports venues and temples. The fire department said 174 firefighters, 9 ground teams, 52 vehicles, two water-dropping planes and four helicopters were tackling the blaze, which broke out Wednesday.

The fire department said 174 firefighters, nine ground teams, 52 vehicles, two water-dropping planes and four helicopters were tackling the fire, which broke out Wednesday. Evacuation orders were issued for more than a dozen villages. On the northern fringes of the Greek capital, a forest fire that had been on the wane after burning into a suburb on Tuesday rekindled, sending plumes of thick smoke into the sky and fire trucks racing to the area, sirens blaring.

The fire in the Athens suburb of Varibobi damaged dozens of homes and sent thousands fleeing earlier in the week, but had no longer been threatening inhabited areas. Authorities sent text messages to cellphones in the area urging people to evacuate. A heat wave described as Greece's worst since 1987 has baked the country for more than a week, sending temperatures spiraling to 45 degrees Celsius (113 degrees Fahrenheit) and creating tinder-dry conditions in shrubland and forests.

Neighboring countries face similar conditions, fueling deadly and widespread wildfires in Turkey and blazes in Italy and across the Mediterranean region. Officials in Albania said one person died of smoke inhalation near the southern city of Gjirokaster.

In Turkey, a wildfire that reached the compound of a coal-fueled power plant in the southwest, forcing residents to flee in boats and cars, was contained Thursday after raging for some 11 hours. But others continued to burn.

A European Union disaster response group said firefighters and water-dropping planes were being sent from EU members to Italy, Greece, Albania and North Macedonia. The EU Atmosphere Monitoring Service said smoke plumes from the region’s wildfires were clearly visible in satellite images, which also showed that the intensity of the wildfires in Turkey was at the highest level since records started in 2003.

Greece saw more than 100 wildfires break out over 24 hours from late Tuesday to late Wednesday. Defense Minister Nikolaos Panagiotopoulos said Thursday that the armed forces would expand its role in fire prevention, with ground and air patrols over areas vulnerable to wildfires. The air patrols are being carried out by both manned and unmanned aircraft, he said. "The armed forces are always present in difficult times, and so they are now,” Panagiotopoulos said.

A major fire that broke out Tuesday was ravaging forests on the island of Evia, near the Greek mainland, leading to the evacuation of villages. The coast guard evacuated around 90 people from a beach. More than 160 firefighters, three planes and three helicopters, as well as five ground teams and 57 vehicles, were deployed to the wildfire in Evia. France's civil protection agency said 40 French firefighters and eight tons of material had headed to Greece late Wednesday to assist in the Evia blaze.

To the north of the Greek capital, a forest fire that encroached into northern suburbs, burning dozens of homes and forcing thousands of people to flee, was continuing to burn. The fire, which started Tuesday, was no longer threatening inhabited areas but was still decimating forest areas at the foot of Mount Parnitha.

Greek scientists said the total destruction in just three days this month in Greece exceeded 50% of the average area burned in the country in previous years.

An Athens Observatory report said an estimated 6,000 hectares (14,800 acres) went up in smoke between Sunday and Wednesday, compared to 10,400 hectares in the whole of last year. The causes of the Greek wildfires were unclear, but authorities say human error and carelessness are most frequently to blame.