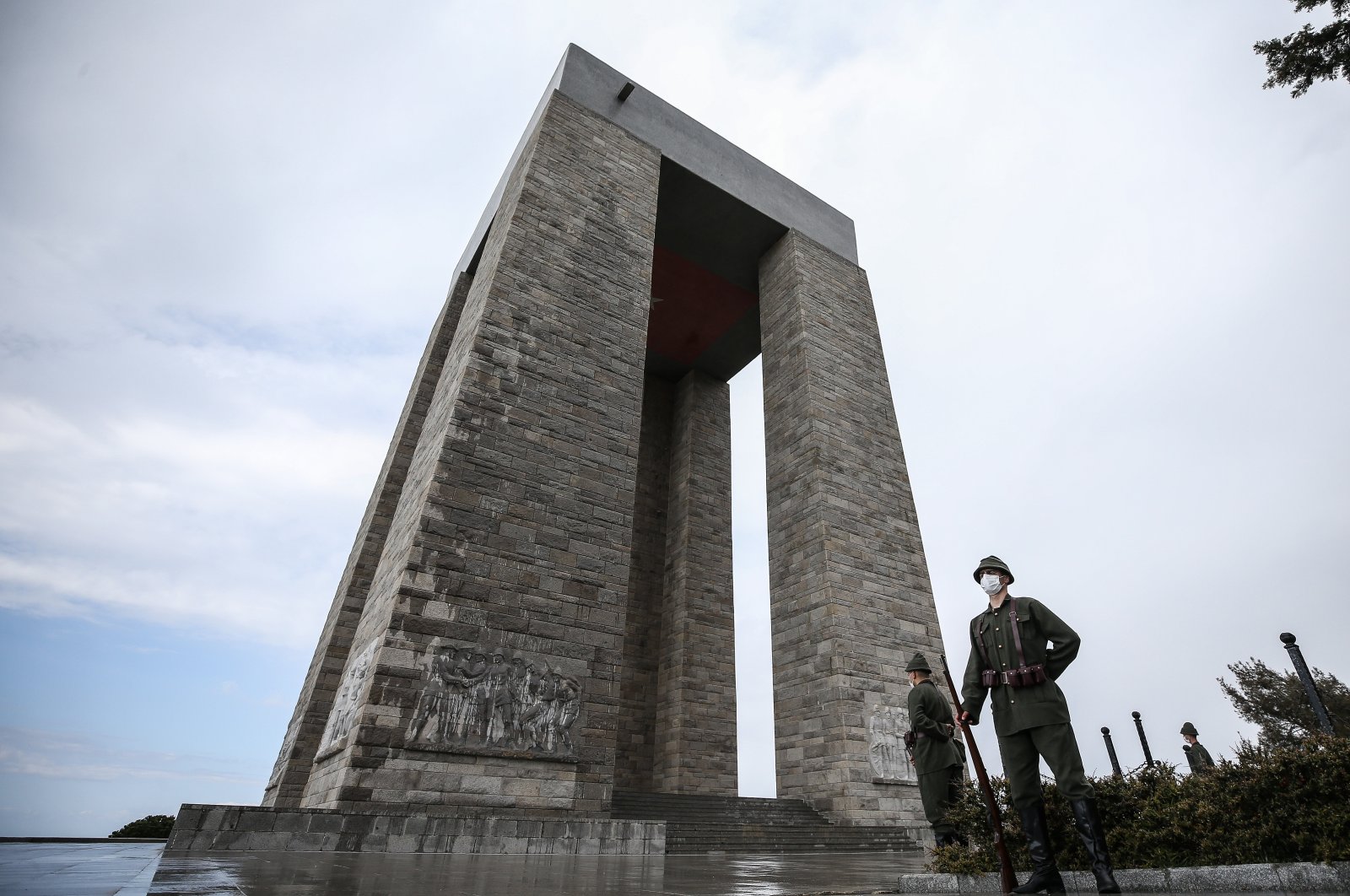 The Çanakkale Victory, a glorious chapter in Turkish history and the collapsing Ottoman Empire's last hurrah, marked its 106th anniversary on Thursday with muted events held amid the COVID-19 pandemic

A small crowd including dignitaries donning masks paid tribute to fallen soldiers on Thursday, in Çanakkale, a western province where the greatest victories in Turkish history took place. The ongoing coronavirus pandemic scaled back ceremonies to mark the 106th anniversary of the World War I victory but emotions ran high on the day which is formally known as Çanakkale Victory and Martyrs’ Day. The ceremonies culminated in Çanakkale but many people paid visits to the graves of soldiers fallen in World War I and recent counterterrorism operations on the occasion.

The day originally marks the decisive victory of outnumbered Ottoman troops on Mar. 18, 1915, against British and French warships which sought to cross the Dardanelles (Çanakkale) Strait, a major waterway to reach Istanbul, the then capital of the Ottoman Empire.

Parliamentary Speaker Mustafa Şentop joined the Minister of National Defense Hulusi Akar and Minister of Culture and Tourism Mehmet Nuri Ersoy as they placed wreaths at Martyrs’ Monument erected in memory of the soldiers who lost their lives in (Gelibolu) Peninsula, on the occasion. An actor recited the iconic poem “Çanakkale Şehitlerine” (To The Martyrs of Çanakkale) penned by Mehmet Akif Ersoy, who also wrote the country’s national anthem, at the event while religious officials recited verses from Quran in memory of fallen soldiers. The group later visited the graves of soldiers nearby.

Turkish Armed Forces organized a naval parade across Çanakkale Strait and a branch of the Turkish Air Forces performed aerial stunts to mark the occassion.

President Recep Tayyip Erdoğan issued a message on the occasion and praised the “glorious saga of our heroic ancestors against enemies of the Turkish presence in Anatolia and our sacred values.”

“The spirit of Çanakkale is a sacred value for our nation which conveyed and will convey the ideal of independence inherited from our ancestors. Our history is full of lessons for those who wanted to invade our territories. Our nation, like it did in Çanakkale and in War of Independence, did not allow invasion on July 15,” he said, referring to a 2016 coup attempt by military infiltrators of Gülenist Terror Group (FETÖ). “We are determined to keep that spirit and advance our country, to bring it to same level with advanced civilizations. Seeing this spirit fresh today, instills confidence,” the president said in his message. “I remember fondly all our martyrs and heroes, Mustafa Kemal Atatürk in particular, who made these territories our homeland,” he added.

The victory, in which the Ottoman side lost 79 soldiers, was followed by a fierce land campaign by the Allies in the following weeks. After their March 18 failure, Britain and France planned to take their troops to the Arıburnu, Seddülbahir and Kumkale shores on April 25 and take charge of the Gallipoli Strait with a military operation. The Ottoman Empire went to war with its ally Germany, along with citizens and volunteers in the country with more than 30 nationals. The Allied army, on the other hand, consisted of British and French soldiers, as well as soldiers brought from colonies in Australia, New Zealand, India, Nepal and Senegal.

The Allies endured defeat after defeat during the monthslong campaign before they finally evacuated the peninsula and gave birth to a renewed spirit of defiance against invaders, under the motto of “Çanakkale Geçilmez” (Çanakkale Cannot Be Crossed). In the following years, it inspired a movement of independence under the leadership of Mustafa Kemal Atatürk, who went on to become the founder of the Republic of Turkey, following the collapse of the Ottoman Empire. Atatürk, then a lieutenant colonel and commander of the 19th Division of the army, had famously told his troops: "I am not ordering you to attack. I am ordering you to die," during the land campaign as he commanded reinforcements dispatched to help outnumbered troops on the Çanakkale shores. He halted the advance of the Anzac troops landing in Arıburnu into the peninsula in the Conkbayırı (Chunuk Bair) area. His accomplishments led to his promotion to the rank of colonel on Jun. 1, 1915.