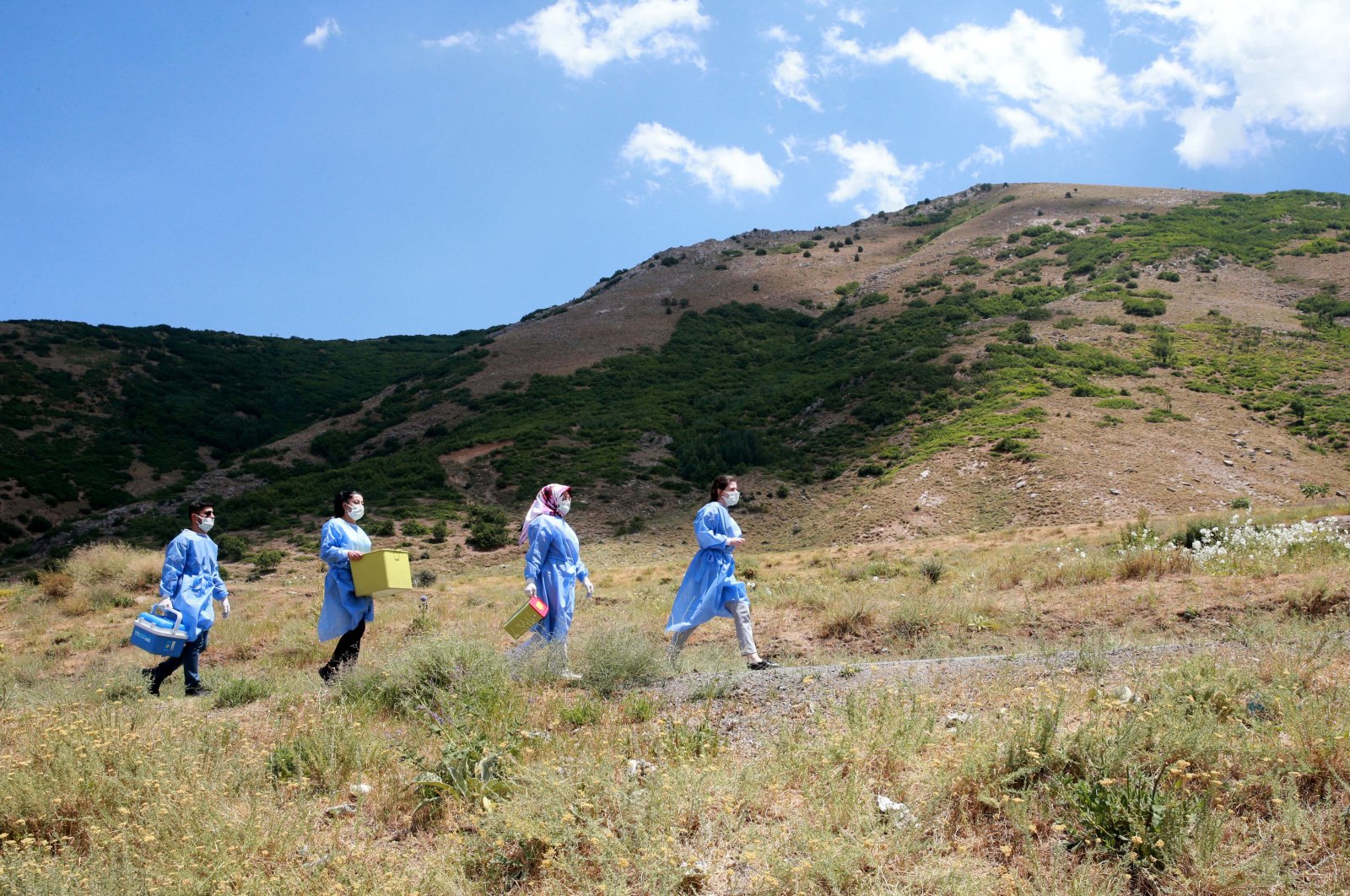 Turkey reached more than 63 million doses in COVID-19 vaccinations but the work to achieve mass immunity lingers, with health care workers trying to reach people throughout the country who did not get their jabs

With 20.5 million who had both their doses of the COVID-19 vaccine, reaching the 70% target in achieving mass immunity may seem far away, but undaunted health care workers of Turkey work day and night for the inoculation drive.

Their efforts helped the country to reach daily vaccination numbers of 1 million at times but their work is not done, especially in the face of vaccine hesitancy and due to people in remote areas unable to travel to hospitals and other venues for vaccination.

In the eastern regions where vaccination rates are reported to be low, crews scale the mountains to reach more people. A reported hesitancy, especially among the youth, and the rough terrain of the region cause challenges for the inoculation drive. Still, these difficulties have not hindered crews from visiting everywhere, from inner-city shops to remote villages far away from the nearest clinic.

In Bitlis, vaccination crews fight smothering weather and challenging terrain to find those who did not have their jabs yet. Some try to convince those who hesitate at getting their jabs while others administer doses to those who cannot afford to go to the nearest town for their shots.

Dr. Irem Yorulmaz, an official from Tatvan Directorate of Health in the eponymous district of the eastern province, says their vaccination campaign takes them everywhere, from shopping malls to the shores of Lake Van, to the mountainous villages and fields where laborers have little time for vaccination in the city.

“Our teams sacrifice their time to reach more people but we are worried about people resisting the vaccination. They don’t want to get vaccinated because of speculative rumors,” she told Anadolu Agency (AA), referring to conspiracy theories by vaccine skeptics. “Certainly, there are challenges but we are ready to do whatever we can if only people are willing to get vaccinated,” she said.

“People believe in false news about vaccination. In some villages, we encountered people who believed that the vaccines cause infertility. We are trying to fight this misperception,” Elif Karaca Ipek, a vaccination nurse, said.

In the mountain of Tanin Tanin in the southeastern province of Şırnak’s Uludere district, health care crews climb a 2,500-meters high mountain to reach nomads tending their livestock in highlands. Nomads spending the summer in the mountain are unable to travel to towns on the outskirts, as they cannot leave their animals alone.

Şırnak Governor Ali Hamza Pehlivan says some 400 health care workers are working “in the field” to reach more people in the province where about 200,000 people were vaccinated. “We are indebted to health care workers going everywhere for vaccination. We have a population of 540,000 and so far, vaccinated 197,000 people. We want to have at least 55% of the population vaccinated this week,” he told Demirören News Agency (DHA).

Pehlivan said they had no shortage of vaccines and people had access to jabs in most places, noting that they even set up vaccination spots at security checkpoints across the province. “We bring the vaccines to our citizens instead of bringing them to hospitals,” he said.

Vaccination is vital for the country especially amid concerns from the delta and delta plus variants. Though vaccination is not mandatory, the Health Ministry repeatedly appeals to the public to have their jabs, after the vaccination was launched for everyone above the age of 18 last month.

The country lifted almost all restrictions, including curfews, on July 1, in the aftermath of a decline in cases and after the vaccination campaign was accelerated with the arrival of more vaccines from China’s Sinovac and Germany’s Pfizer-BioNTech. However, media reports say the ministry may introduce restrictions for those abstaining from having their vaccines soon. Without vaccination, there are fears of a fourth wave of the pandemic occurring. Any slowdown in the vaccination drive also worries the public who are still urged by experts to stay away from crowds.

Kastamonu, a province in the north, hopes to assuage public concerns with a new practice. Businesses whose employees are vaccinated, are delivered stickers by the local health directorate which reads, “Everyone working in this place is vaccinated.” Prominently displayed stickers is a sign of “encouraging more people to get vaccinated,” the province’s Director of Health Dr. Yüksel Kutlu told AA.

Professor Seçil Özkan, a member of the Health Ministry’s Coronavirus Scientific Advisory Board, said that vaccination is the only way to stop the rise in COVID-19 cases, which fluctuate between 6,000 and 7,000 daily. Özkan told DHA that public awareness of the safety and efficacy of vaccines are important and urged the public not to heed the fake news on the issue.

Özkan also noted that although vaccination was underway, people should not ditch protective masks and social distancing rules, especially ahead of Qurban Bayram, also known as Eid al-Adha, the Muslim holiday that begins Tuesday. Bayram is an occasion of higher mobility, with thousands traveling between cities.

“False beliefs that trigger vaccine skepticism may cause you to get infected. Turkey currently has the highly infectious delta variant. If the number of cases significantly increases, we will have to bring back restrictions,” Özkan said.