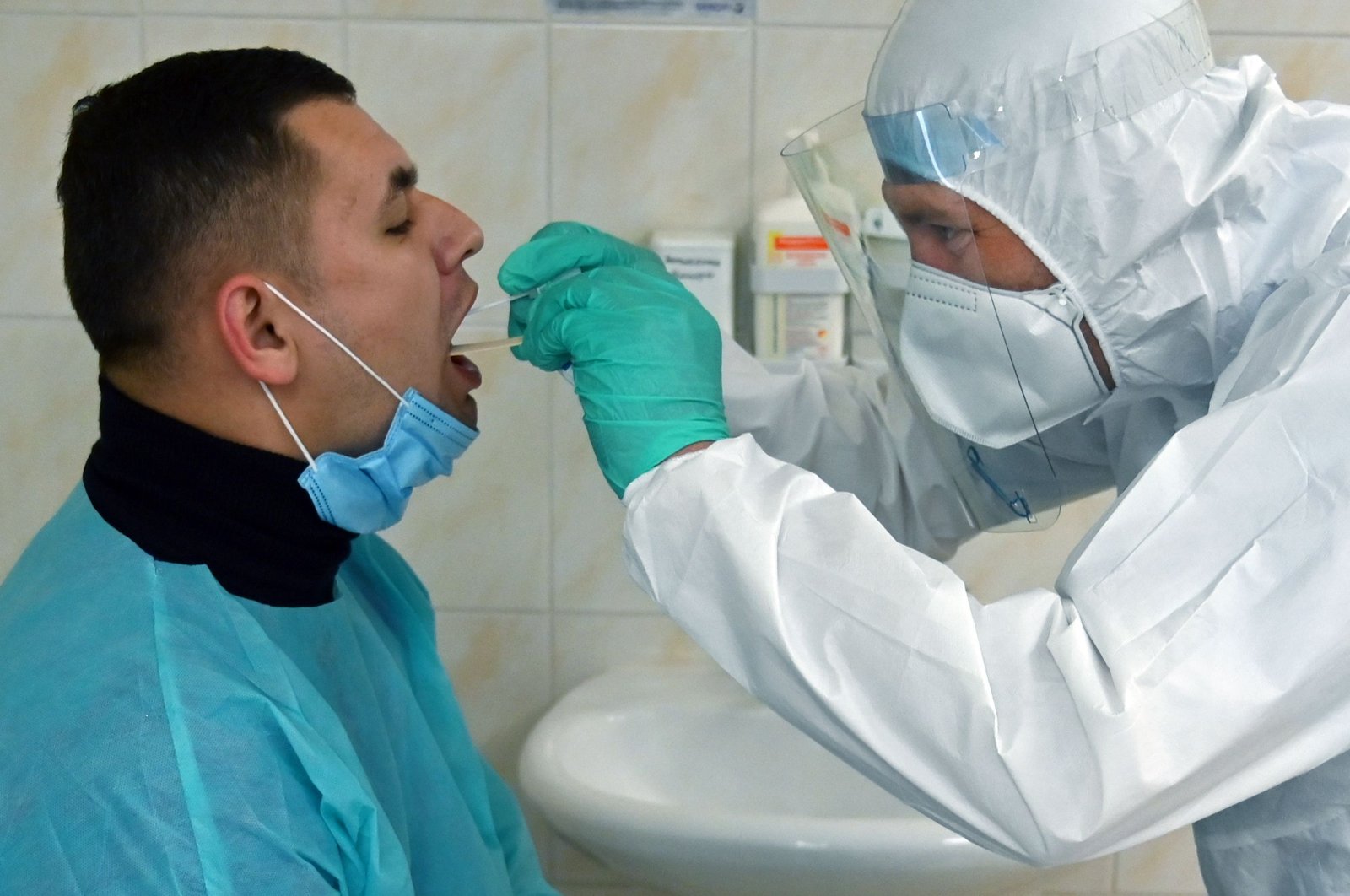 Testing anyone with a cough or fever for COVID-19, the Health Ministry also ordered anyone who came in contact with a confirmed patient to be tested as well. (AFP Photo)
by Daily Sabah with Agencies Apr 19, 2020 2:23 pm

While governments across the globe struggle to increase their testing capabilities after realizing how widespread the COVID-19 pandemic is, Turkey ranked seventh worldwide in carrying out coronavirus tests

Turkey became one of the world’s top 10 countries in the number of COVID-19 tests carried out, significantly increasing its capabilities in recent weeks to contain the coronavirus outbreak.

According to Health Ministry data on Saturday, Turkey has carried out 598,933 coronavirus tests since the outbreak began, becoming the country to perform the seventh most.

Turkey’s number of confirmed coronavirus cases stands at 82,329, with more than 10,000 recovered patients, while the death toll was reported as 1,809 as of Saturday.

The head of the World Health Organization (WHO) said in March that the U.N. agency had a "simple message” for all countries: “test, test, test!" It was an effort to draw international attention to the importance of testing and detecting COVID-19 cases.

Turkey quickly adopted the WHO policy and began increasing daily test numbers to identify those infected and to stop the spread of the virus.

Statistics on the Health Ministry's database said Turkey significantly increased the number of tests used since late March when there was a daily average of almost 11,500 tests. For the past week, the ministry has been testing more than 30,000 each day.

In addition to the PCR tests, Turkey also uses imported rapid testing kits to diagnose the infected, which are less accurate but offer faster results. Health authorities use both kits in tandem to deal with the virus crisis.

To date, Turkey has also provided medical aid to at least 30 countries, including testing kits.

After Europe was recognized as the "new epicenter" of the virus, countries there started conducting tests at an exponential rate. Germany has used more than 1.7 million testing kits, and Italy and Spain conducted 1.3 million and 930,000, respectively.

In comparison with the other European heavyweights, the British and French response to testing has been slower, as each has respectively conducted around 460,000 and 463,000 diagnosis tests.

As for the U.S., which is second to none with more than 735,000 cases, has used an excess of 3.7 million tests, while its neighbor Canada has conducted more than half a million tests.

Iran, which became the first largely infected country in the Middle East, has performed 310,000 tests. Saudi Arabia, on the other hand, has used 150,000 kits.

The world's second-most populated country, India, has conducted nearly 372,000 tests, whereas the figure in Pakistan stands near 100,000.

Turkish citizens can apply to health authorities if they show symptoms of the virus and get tested. In addition, all those evacuated from abroad are diagnosed by medical staff. If someone tests positive, that person is referred to quarantine.

Testing and treatment services for the coronavirus are offered free of charge in Turkey, where those older than 65 years of age or younger than 20 are not allowed to go out as part of measures taken to curb the spread of the outbreak.

Ankara also ramped up use of contact tracing to map out the chain of interactions in COVID-19 cases. A staff composed of doctors and other professionals scan the information on confirmed patients in a call center and dispatch teams in protective gear to find the contacts of patients who are viewed as prospective patients themselves. Crews arrange a 14-day quarantine for those potential patients and treatment if they test positive.

Turkey also launched the Pandemic Isolation Tracking project to reduce the spread of the disease by tracking patients and making sure they adhere to their government-imposed quarantine. Citizens with COVID-19 will be monitored to make sure they remain in the required isolation. If patients break the quarantine, a warning message will be sent to their mobile phones. In addition, these patients will be instantly contacted through an automatic call and asked to return to isolation. If the disobedience continues, administrative action can be taken. Police teams will be able to find violators and confirm them with their ID.

Meanwhile, Deputy Foreign Minister Yavuz Selim Kıran on Saturday said 1,765 Turkish citizens were brought back to the country over the past 24 hours as part of Turkey's efforts to evacuate its nationals stranded abroad during the pandemic.

The citizens were returned from the U.K., Netherlands, Poland, Ukraine, Kuwait and Kazakhstan, Kıran said, adding that they were placed under quarantine following their arrival.

According to Foreign Minister Mevlüt Çavuşoğlu, Turkey is planning to dispatch more than 100 flights to bring its citizens back from 72 countries before the beginning of the Muslim holy month of Ramadan.

He said a total of more than 25,000 had been brought back to Turkey from 74 different countries.

Çavuşoğlu also said a total of 342 overseas Turkish nationals have died due to the coronavirus since the beginning of the global outbreak.